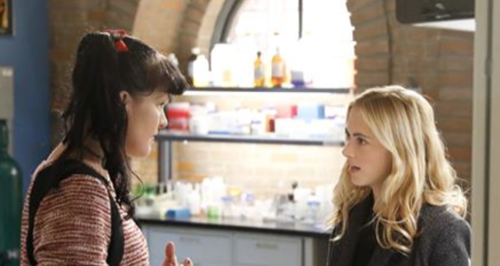 Tonight on CBS the #1 drama series NCIS with an all-new Tuesday, February 21, 2017, season 14 episode 16 and we have your NCIS recap below for you. On tonight’s NCIS season 14 episode 15 “Bishop (Emily Wickersham) becomes more determined than ever to seek revenge for the murder of Qasim, (Rafi Silver) her late boyfriend, after Gibbs (Mark Harmon) and the team find a new lead in the Chen case. Meanwhile, Torres teaches the agents the art of pickpocketing.”

Naval Commander Renee Turner was murdered on tonight’s episode of “NCIS”. She had apparently gone jogging like she routinely did and she had returned home to find a gun laid out for her however her killers had been kind enough to call her make their motivations known. They had said that Turner had let them down which appeared to be a death penalty in itself and so they demanded that she kill herself with the gun or Turner’s daughter would face her mother’s punishment. So Turner didn’t have much of a choice. She had been told to kill herself or let her daughter die and so she chose to kill herself.

But that begged the question of what she did to deserve punishment? Turner was a decorated naval commander and she had been married to someone that had also been involved with the navy. So her death just didn’t make sense. Turner had no reason whatsoever to be dirty and her file had seemed normal enough yet she did something and that led to her death. And so NCIS were flying blind when they received Turner’s case. They had looked into Turner and she had come across as a devoted mother. She had planned a trip planned to Disney world as a surprise for her daughter and she had admittedly been doing her best to let the time fly by with her husband on tour.

So Turner’s death had stumped NCIS. They didn’t know why she would commit suicide because she didn’t have a record of depression and no one in her unit had suspected that there wasn’t anything wrong. Though something about the scene, while clean-cut, had felt wrong. The guys had found the TV still on and there hadn’t been any indication that Turner was gearing up to kill herself much less go through with it, but Gibbs had ordered his people to go through everything and McGee had been told to find out where the feed for the TV was coming from. And he had had to investigate on his own because Bishop had surprisingly bailed on him.

Bishop had said that her water heat had sprung a leak and that she had to take care of it. So Gibbs had allowed her to leave the scene and he had thought she was going right home though she instead went to a meeting with Reeves. Reeves and Bishop had started their own investigation into Chen and their latest lead had told them about a radio station. The guy who was allegedly a courier for Chen had overhead some of Chen’s people talking and he said that he overheard them talking about a radio station. However, Reeves and Bishop had wanted to check out the station for themselves and so they had eventually run into Gibbs and Quinn.

Gibbs had found out that someone used the video feed to threaten Turner and so McGee had traced the feed directly to that radio station. So that meant Turner’s death was somehow connected to Chen however neither Gibbs nor Vance had wanted to hear excuses from their rogue agents about why they hadn’t stood down liked they had been told. Yet, Bishop and Reeves didn’t feel like they had been in the wrong. They had lost friends and had almost died because of Chen and so arresting Chen meant a lot to them. Even if others didn’t understand it or thought that they were on some revenge mission.

But Bishop and Reeves hadn’t been just stumbling in the dark. They knew that the radio station had attacked the electrical grid and they had been trying to prove it when they had been caught. So Gibbs had followed up on their leads and he had properly interrogated their witness though that radio station that was all so important was part of an underground network. The network was apparently put in place by survivalist who thought the world was going to end and had been a compound for themselves where they thought they would be safe with their weapons. And so Gibbs had had to ask the “survivalists” some questions.

Gibbs had asked the guy running the place if he knew Chen and it seems he didn’t know Chen’s name, but he did know Chen. Chen had been going by the name “Bobby” with the survivalist and he had even helped them fund their compound. Though Bishop had wondered if the attack that Chen was planning was so bad that he wanted a compound to escape to if need be. So NCIS had continued on with the interrogation and he had found out something important. He had found out that Chen was allegedly coming into town that same weekend and that they could catch him if they moved fast enough.

So the Director had called the mission in and he had been completely set on capturing Chen yet somehow the mission to find the billionaire terrorist had later gotten derailed. The higher ups and their personal spokeswoman, which turned out to be Congresswoman Jenna Flemming, had told Vance and NCIS that they couldn’t bring in Chen. They had said that they didn’t have enough evidence to arrest him and so at most all they could do was surveillance. However, Bishop hadn’t been happy with that. She had lost Qasim who had been more than her boyfriend and had actually been her fiancée because Chen had wanted to stop Qasim from cracking his code.

The strangest thing happened, however. Chen had showed up at Gibbs’s house and he had practically gloated about being untouchable. He had told Gibbs and Bishop that he was working with the CIA and Jenna later confirmed it. The congresswoman had told Gibbs and the Director that just so happened to be her boyfriend that Chen had agreed to work with the CIA on capturing a man that was terrorizing Aleppo. Yet, Bishop had done some recon on the man in question while she was in the NSA and she had said that he was small potatoes. So she had wanted to arrest Chen and get justice. And she had no problem with going rogue.

Bishop had gone out of her way to steal the congresswoman’s cell phone and that she had used it to set up Chen. So she had in fact ambushed him. He hadn’t been expecting to see her and he hadn’t come with any backup because he thought he was meeting with a handler. But instead, Bishop had handcuffed to a generator with his code to blow and she had told him that he could press the trigger or wait for the Syrians she had called. Which would be the same men that Chen had been willing to inform on.

And so given such a choice, Chen chose to kill himself by blowing the generator and that stopped him from ever going through with his grand plan.

However, Bishop went rogue and Gibbs told her that there will always be a price that comes with doing that!