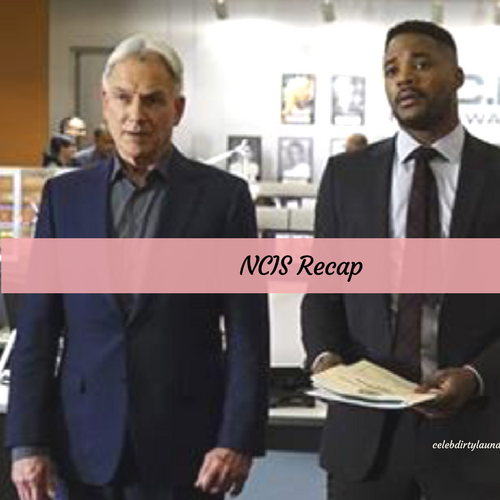 Tonight on CBS the #1 drama series NCIS with an all-new Tuesday, April 4, 2017, season 14 episode 20 and we have your NCIS recap below for you. On tonight’s NCIS season 14 episode 20 “A vice admiral’s laptop is infected with ransomware and he enlists McGee’s help to track down the hacker before the computer virus eliminates his personal and professional files.”

Vice Admiral Chase asked for McGee’s services on tonight’s episode of “NCIS” when his computer became infected with something called ransomware. However, there wasn’t much that McGee could do for him because he couldn’t access any of the files or protect them until he had the ransom key. So McGee thought Chase’s best bet was to pay up and he had told the other man that very same thing though the Vice Admiral had said that he wouldn’t do that. He had claimed that he never gave up a day in his life and that he wasn’t going to start now.

Though McGee had more or less told Chase that he was on his own. McGee knew his limits and he wasn’t going to waste their time by pretending he could get rid of the ransomware when he knew he could not. So McGee had walked away and the Vice Admiral hadn’t appreciated it. Chase had thought that they could still save his data and so he decided to motivate McGee. McGee had unfortunately mentioned that the virus would spread if Chase were to try and send a message to anyone so Chase later decided to send Tim the virus.

Chase had thought that would be enough to get McGee to look at his case again. But Chase hadn’t known that McGee shared his Wi-Fi with everyone in his department and so everyone became infected. Bishop, Torres, Quinn, and even Reeves. So the only one that hadn’t been affected had been Gibbs. Gibbs was pretty low tech already so his phone had been safe yet his team had been compromised and so the Vice Admiral case did become an NCIS case. And there was no simply nothing they could do about it.

So the Vice Admiral was later brought in because he had technically victimized the NCIS department and Vance had wanted answers. Yet, it turns out the reason Chase had been so desperate to get his laptop back was because of his wife. His wife had died a while ago and he had had pictures of her on the laptop that he said he was going to print one day and just never got around to it. And so Chase couldn’t afford to lose those pictures. There were all he had left of his wife and he couldn’t let the hacker destroy them.

The Hacker’s entire game plan was to infect random computers with the ransomware and then threatened to delete the data unless he/they/or she were paid the ransom. However, the Vice Admiral’s desperation led to the team being hacked and now there was no way to pay off the ransom because Vance wouldn’t allow them to each pay off the hacker. So Chase ultimately got what he wanted and McGee as well as the others had tried to find the hacker before their time was up. And they thought their best shot was to go to the Hacker unit of the federal building.

The people working there at least could devote the time needed to find a way to get around the hack and so both Bishop and Reeves had dropped off the laptop believing they were going to get help. Though for some reason the guy that was supposed to help them had been acting quite suspiciously. Clint Asher had sort of jumped when he heard they had been infected by the Elliott virus and he had then claimed that he would work on the computer first thing until he found something. So he had said that he would call them that night.

But something about his behavior had made both Bishop and Reeves feel apprehensive about him. So they tried going back to Clint’s office not long after they had left and they had found him gone. Clint was missing and the laptop was still in his office despite saying that he was going to get on it right away so the agents had wondered what was going on. They knew that they had their suspicions yet it didn’t make sense for Clint to have done a runner within moments of them leaving and not take the computer.

If the computer connected him to the virus in any way then he would have taken it. Yet, it stayed and he just disappeared. So NCIS looked into Clint Asher and they hadn’t found anything that would connect him to the virus. He was thirty years old with a wife and son however he had never been in trouble with the law and even his super secret storage container that he had put under a false name had been completely empty. And so they tried finding Clint by using the GPS on his car and it had been under a lake.

So NCIS had had the car pulled out of the water and surprisingly they found Clint Asher in the trunk of his car though he had been frozen to death and that wasn’t a euphemism. Clint had actually been frozen to death with liquid nitrogen and not a lot of people had access to the amount that it would take to complete such a job. However, there was this thing called Cryotherapy Spa that was the latest trend so Bishop had looked into the spas in the area and she had found one that was ordering more than necessary.

The Spa was technically ordering enough material to give five hundred people their special treatment when they mostly had eighty to nighty people coming in a week. Though Bishop and McGee had spoken to the girl that oversaw the place while her manager was away and they had found out that there was something going on. The spa was apparently giving away tanks to someone by the name of David Yates and that had been the same name that was on the storage unit. So they knew that David Yates had to be real.

It was one thing to have the container and quite another to be meeting with people by that name. So the team assumed this David must have had something to do with Clint’s death and they might have found out why. Clint, it seems had been familiar with the Elliott virus because he created it. Clint had created the virus in college and had sent it to all his friends as some sort of joke yet he had gotten in trouble for it and had gotten kicked out of college because his friends hadn’t appreciated his joke. But the fact that Clint had created the virus meant he knew his killer.

His killer could have only have used the virus if he knew how it worked and how Clint set it up. So the answer to who the hacker was turned out to be Carlo Hackett who was Clint’s roommate in college and who had helped create the virus. Yet, Carlo had gone done a different path. He had become obsessed with suspended animation and had even rented out a second storage unit where he had kept his frozen specimen in cryo-storage however his “specimen” had been homeless men that he had essentially killed and he had used the ransomware to help fund his project.

The liquid nitrogen had been too expensive for Carlo who thought he was some kind of genius and could barely hold down a job. So he revived the ransomware and had ultimately killed his old friend Clint when Clint figured out what he was doing though Clint helped point the way to Carlo and capturing Carlo alive allowed the team to remove the ransomware without losing any data. However, the Vice Admiral did apologize in the end for what he did to the team and had learned a lesson about pride on tonight’s episode of “NCIS”.

And Quinn who hadn’t been involved as much as usual with the case had been taking care of her mother who forgetting more and more of what’s going on so Quinn ultimately decided to move back in with her.