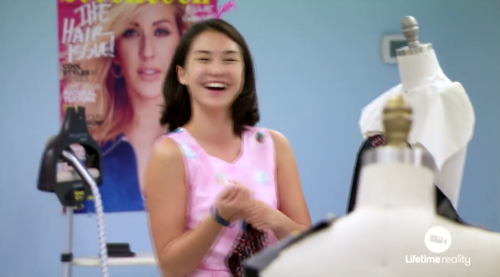 Tim Gunn had used his one save on A’kai last week. A’kai had unfortunately had creative differences with his partner Hawwaa during the design challenge and they bickering had resulted in neither of them pulling off their best look however both Akai and Hawwaa had something to prove tonight and they had wanted to show the judges that they did deserve the spot in the competition by rising to meet the latest challenge. But the latest challenge was probably the toughest challenge that either had ever faced. Tim Gunn and his personal guest Melanie Chase had met with the designers in the workroom and they had told them about the fitbit challenge.

Melanie Chase was actually the Director of Product Marketing and she had handed out fitbit bracelets and necklaces to the designers. The designers were going to be wearing them and keeping track of their steps as they created a transitional look for the modern woman. However, a transitional look could be tricky if it wasn’t executed properly. The transitional outfit was basically an outfit that could be worn at work day and then turned into something that could remarkable look just as good at night. So the trick to pulling it off was knowing your fabrics though the designers had been given some sad news.

The designers had been told that fabric shopping at Mood was out and that they had to depend on Mini Mood instead. Which was a problem! Mini Mood had obviously less choices than the store and the designers had had forty-five minutes to shop as well as to sketch their designs. Though what turned the shopping trip into a hit or miss had been the designers themselves. There had been designers that wanted to push their design choices and try something new yet there had also been a few designers that had wanted to play it safe. Cartier for example had wanted to play it safe and so later Tim had been forced to warn her about her design because he didn’t see anything unique.

Cartier had created a shift dress with vest that could be turned inside out, but Tim had said that all of the those things could currently be bought at a store. Meaning there was no originality to what Cartier had created. Yet, Cartier had been told that she could salvage the dress with some quick thinking and she had thought that adding some fringe to the dress would somehow make it better than what it was. So it wasn’t until they were dressing the models that Cartier truly got to see how simply her outfit was especially as it was going to be compared to what everyone else did. Hawwaa had wanted to express herself in design and the outfit had looked Afro Chic.

Hawwaa’s dress had been eye popping on the runway and the makeup had complimented the bright colors to such an extent that she finally saw the judges loving what she created. But Hawwaa wasn’t the only one that had impressed the judges. Allie had also created a unique look with a reverse wraparound dress with an open split in the front to show off her petal pants. Then there was also Chelsea who created a fashion forward jumpsuit made with gray and neon yellow fabric. So there were some that were leading the pack however Cartier fell to bottom with Izzy and Rene for company.

Izzy had tried something new by being a little edgier and it turns out edgier didn’t fit her. Her dress with black and argyle fabric had been too simple. Like yes someone would buy it though Izzy hadn’t done something that was fantastic. However, Rene had fall back into his patterns and that didn’t work for him anymore. He had tried to create a two-piece suit with the caged effect and the judges had seen that before. Rene had used the cutout features frequently throughout the competition and the judges had wanted to see if he was capable of anything more. So Izzy, Rene, and Cartier had all landed in the bottom and they had regretted their choices.

Izzy had surprisingly freaked out in the workroom as she was building the dress because she had known that it wasn’t a winner. Though she went ahead with it because she hadn’t wanted to jinx herself. She said that every designer that suddenly changed their design midway had gone home because they had doubted themselves and so she hadn’t wanted to be like them yet funnily enough her choice had landed her in the bottom three and she had still been in danger even after Chelsea had been acknowledged as the winner of the latest challenge. So the bottom two had come down between Izzy and Rene.

But unfortunately there was no way of saving Rene. He hadn’t created something worthwhile and he hadn’t impressed the judges by showing them something they had never seen before. So Rene was eliminated on tonight’s episode and all Tim could tell him was that he needed to make sure that he didn’t leave anything behind.