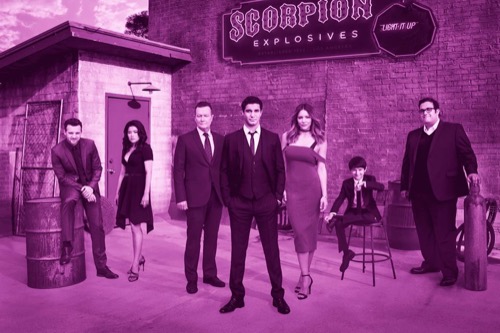 Tonight on CBS their hit drama/comedy Scorpion airs with an all-new Monday, October 23, 2017, season 4 episode 5 and we have your Scorpion recap below!  On tonight’s Scorpion season 4 episode 5 “Sci Hard,” as per the CBS synopsis, “Team Scorpion is taken hostage by a group attempting a virtual heist at a tech convention and must outwit their captors utilizing the cutting edge technology on display.”

Walter and Paige arrive at The Vor Collective, what Paige calls a nerd gala. Walter is nervous. He tells Paige that he is on probation with the group but once they meet her he will be back in. Paige is weary but heads in with him. Walter gets them drinks while Paige mingles. Walter comes over to the group she is talking to. They can’t believe Walt is there after he got them all sick with E. coli! Paige is taken aback while Walter tries to make it seem less than it is.

Happy is looking at Cabe’s car. It is going to cost thousands. Cabe heads off to get them coffee. Toby overhears. Coffee is not good for her. They are trying to procreate. Cabe is grossed out and so is Happy.  Forget the coffee, Happy is ready to head to their conference.

Sly arrives in Vermont. He is there to take the bar exam. He tells the proctor he studied on the flight there. And no, he doesn’t have a law degree.

Walt and Paige set-up for the conference. Cabe arrives. He brought all of the wrong boxes. Some of the Vor Collective members are there and Walt is stressed. Cabe walks the conference. He sees a pod that promises rest. He slips in, lays down and unwinds. Meanwhile, men with masks and guns come in. They shoot into the air. They have rigged all of the doors with explosives. They force everyone into another room and take their phones and wallets. Walt and Paige notice Cabe isn’t there. He is back in the pod singing Gloria.

The masked men demand via streaming video that a man at the conference destroy the technology he has created and all of the dates he has collected. Happy and Toby arrive outside. They inform the authorities of Cabe on the inside.

Cabe comes out of the pod and discovers no one is there. He starts looking around. He hides under a table. One of the masked men walks by. Cabe’s phone rings. The man stops. He heads to the table. Cabe hits him from behind. They fight. Cabe takes him and gets his gun. He puts the man in the pod. Toby calls again. He answers. The detective wants to talk to Cabe. He runs his numbers and realizes Cabe has been suspended. Cabe continues to look around.

Cabe calls Sly who is on an exam. Sly leaves to the bathroom. Cabe needs to know where to find a flash drive. Cabe tells him to call Toby and Happy. Meanwhile, Cabe takes out the second guy with a robotic arm.

The masked men want to get into the man’s software, his banking software. He stands to talk to them and they begin hitting him. Paige steals a camera. Walt stands up and tells them he is a perfect hacker. His nemesis from Vor Collections also stands up. He is a programmer. The men tell them that they both need to hack into the software. Meanwhile, the man admits to Paige that there isn’t any money in there. The software isn’t actually finished. His display at the conference is smoke and mirrors.

Sly explains why he was on the phone to the proctor. He shows him proof. The proctor tells him that he can work in the bathroom on his laptop and he will watch him. Sly connects with Cabe, Toby, and Happy. Sly is going to create a fake wire transfer. While they all talk the detective on the scene tells Happy and Toby that they aren’t going anywhere now that he knows they are connected to Cabe. Sly is on speaker. He tells the detective he is their lawyer and he cannot legally hold them and if he tries Sly will file a civil suit. Toby and Happy take off. Sly fakes a site, one using Cabe via a camera pretending to be a banking butler. The masked men buy it.

Happy and Toby head into a local bank. They have a robbery note on them. Toby tells Happy good luck. He will be outside. She gives him a look. He follows her inside. Moments later they came running out. They jump into a car and haul it to the conference. The cops chase them.

Meanwhile, Cabe is still trying to hold off the men with his fake website presentation. A masked man from nowhere takes Cabe out. Sly finishes just in time. Cabe finishes the guy off. He straightens his suit and confirms the transfer via camera. It worked. The men believe it.

Happy and Toby are still on a high-speed chase. Something is burning Toby. He pulls off his pant. He is wearing tighty-whiteys. Happy is mad. He is supposed to be wearing boxes like he said to help them procreate.

The men won’t leave until they shoot the man in the gut. It will buy them time. Paige hits the confetti button. Chaos erupts as balloons and confetti fall from the sky. The lights flash and music plays.

Toby and Happy pull up to the conference. The detective forces them out of the car. Toby has no pants on.

The masked men blow a hole in the side of the building. They run out and take off on bikes. Cabe comes after them in a station wagon. Gloria is playing in the background. Sly feeds him quick traffic routes. Cabe pulls out in front of them. They slide on their bikes. Cabe gets out and arrests them.

Sly missed the time deadline. The proctor tells him the world needs heroes like him, not more lawyers.

Outside of the conference, Walt’s nemesis comes to say thanks.

Back at the warehouse, the gang meets up. Sly is still looking for a loophole. Cabe tells him it’s ok. He should stop looking. He is going to be fine. Happy offers help to find a car for Cabe. He’s sticking with the station wagon! It breaks down a second later. They all help push. Sly finds out he only answered 70 questions but he passed the bar!