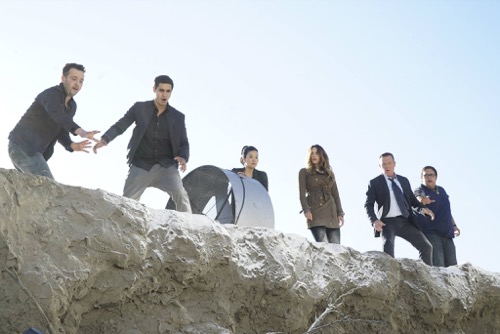 Tonight on CBS their hit drama/comedy Scorpion airs with an all-new Monday, January 23, 2017, episode and we have your Scorpion recap below!  On tonight’s Scorpion season 3 episode 14 as per the CBS synopsis, “The team must rescue a man teetering on the edge of a massive sinkhole that threatens to destroy Los Angeles’ water supply.”

At the warehouse, the gang watches a funny commercial from Sly’s competition. Cabe wants to help him look less like a man child in a cloak. Walter arrives. He had a fight with a store clerk over yogurt. Toby calls Paige and Happy. They add the yogurt vendor to their long running list of places and people Walter has to stay away from.

While looking at the list, Happy and Toby realize that Walter is plummeting into the red zone. Paige doesn’t care. She wants Walter to work it out on his own without the team as a safety net.

Veronica is nervous after being seen on the news. She needs to go back to dig up her money from a warehouse being watched 24/7. She needs to get the cash and return it before they come and kill her. Paige skips the team’s job to go and help her mom.

The team’s latest job – to locate a leak in a municipal water line. Happy determines that they will use eco location to find the leak. The current water workers aren’t happy that they are there. They don’t want their team to touch anything without permission. The man in charge lost a guy recently. It has put him on edge.

Paige arrives at the warehouse with her mom. They pretend to be officials looking for leaks. The guys buy it and let them on the job.

After looking around and witnessing a number of leaks, the team warns them all that disrupting the soil will cause a sink hole. A minute later their warning comes true. The team and the work crew run for it. A silo filled with chemicals close to the sink hole makes the team and crew nervous. It could contaminate the public drinking water. They need to work together to get 40k of chemicals out of the silo and slow down the sink hole. The team connects a tanker to a hose and siphons some of the chemicals out. It’s not moving fast enough.

Veronica locates her money and starts putting it into the briefcase when a worker sees her. Paige enters. She mentions asbestos and the man is willing to do anything they want.

Cabe goes underground to turn a few valves and slow down the sink hole. The grate falls shut and Cabe is locked in. Meanwhile, a worker is on the silo when it begins to tilt towards the sinkhole. The man is stuck on top.

Water is filling up quickly with Cabe stuck under the grate. Sly has to create energy to use a tool to cut the grate. At the same time, Walt, Toby and Happy try to figure out how to save the worker on the silo. They need to strap cables to the silo so it stays in its current position while saving the worker.

Sly manages to cut through the grate and pull Cabe to safety with the help of a crew member. Walter isn’t doing too well. He comes up with a plan to use safety nets to catch the silo and the worker. When he tells the chief his plan, he is arrogant and rude. The chief punches him in the face. Happy tells Walter that he sucks at talking to people. He needs to go back to the chief and tell him his plan by explaining it better. He needs to work on his social skills and consider the chief’s feelings.

Walter explains that he isn’t good at communicating but he knows how it feels to lose someone. He explains his plan to the chief and they get to work. The silo tilts, but the worker cant get off the top. His leg is broken. Walter gets on the silo and heads down to help the man. The chief follows behind him. Walter almost falls into the sink hole after he loses his balance. All 3 of the men get to safety but the silo fractures in the middle and spews chemicals into the sink hole.

Paige and Veronica arrive. They need to think fast. They come up with a chemical recipe to harden the chemicals in the hole before it absorbs into the earth and contaminates the water. As they dump bags of chemicals, Veronica loses her balance while looking out for Walter and falls!!

Back at the warehouse, the team is sad as they watch the reports of Veronica’s death. Paige sits alone in a room. A man enters. He wants the money Veronica owes him. It is Paige’s debt now. She tells the man that she will pay him off. She needs time to grieve.

Veronica comes out of the trailer in the warehouse. The team all worked together to con the men so that she is free and clear. Cabe gives her a new identity but he doesn’t want any problems. She thanks the entire team for being Paige’s feeling. Something she couldn’t give Paige. Veronica tells Ralph that they will have to be pen pals again – she needs to keep a low profile. The team gives Paige and Veronica some time alone. Veronica tells her that just because she couldn’t change doesn’t mean Walter can’t. She says goodbye after telling Paige she left her a little something in her desk drawer – a bundle of cash!