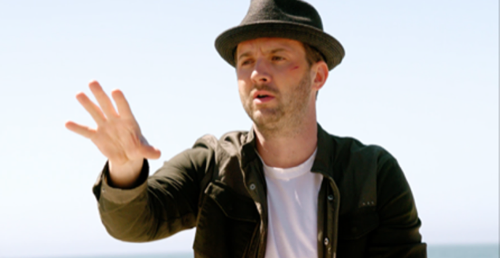 Tonight on CBS their hit drama/comedy Scorpion airs with an all-new Monday, May 8, 2017, episode and we have your Scorpion recap below!  On tonight’s Scorpion season 3 episode 24 as per the CBS synopsis,  “The team’s plane crash lands on a remote desert island while en route to Toby and Happy’s honeymoon, leaving them all with little hope for rescue.”

The team is on a flight together following Happy and Toby’s wedding. Something is wrong with the plane. Happy is co-piloting while Walter tries to solve the problem. The rest of them are panicking. Walter asks the pilot to lower the plane so that they can equalize the pressure. The rest of the gang puts on their safety devices. They see a sandy beach ahead.  They brace for impact. They all land on the beach with cuts and bruises.

The pilot is hurt. They have 60 minutes to save his life. The pilot is nervous about them because they are not doctors. He wants to give them time to be discovered. Toby start looking for supplies to make a blood filter. The other start a fire to sterilize the tools. Sly and Paige go into the jungle to find fruit with Walter. Walter finds a flower gives it to Paige.

Sly finds a log to the other side with the high ravine in the middle. He crosses it without hesitation to pick lemons. Walter tells Paige that Sly has been afraid of death his whole life and now he seems to be embracing it.

The gang finds an old World War II bunker. Walter finds a radio. Meanwhile, Cabe and Henry have a heart-to-heart about Paige and Walter. The pilot yells for help. He is in more pain than he thought. Toby talks him down. Walter and Sly work on the radio. Sly doesn’t think it’s possible to fix but Walter is optimistic. He gets it working in the relationship is headed their way. They must work together and make sure that the ship sees them.

The gang splits up. One group works to create tiki torches to start the plane on fire to make the passing ship see them. Toby works on the pilot with the help of Happy. The two argue about things Happy has done in her past that Toby had no idea about. They hook up the blood filter and begin to pump. For several seconds the pilot does not respond. Luckily he comes out of it.

Meanwhile, Walter can’t stop saying loving things about Paige making everyone uncomfortable. Paige pulls him aside and tell him that he sucks at this. He needs to let things progress naturally between the two of them. Sly breaks up there talk when he tells them that the ship is coming sooner than they thought and the fire is not high enough to gain notice.

Walter directs the team, they need to create smoke. My fines his binoculars in spots a flare gun. The flare inside is OK. They need to launch it in the air. Cabe tries to use it but it is broken. Meanwhile, the pilot is getting worse and has internal bleeding. Walter says that they can use the flare to cauterize him.  The team is faced with a dilemma.

They choose to save the pilot while Ralph keeps an eye on the ship. Toby makes an incision while Happy assists him. Cabe and Walter work to launch the flare shell with fire inside of it. The pilots pulse comes back. They want to see if the ship will turn around.

Paige calls Walter to the side to tell him that she was a putts. He should express himself anyway he sees fit. They all wait patiently for the boat to turn around. Time passes by while they all get comfortable eating and breaking coconuts. They are stranded. To be continued.