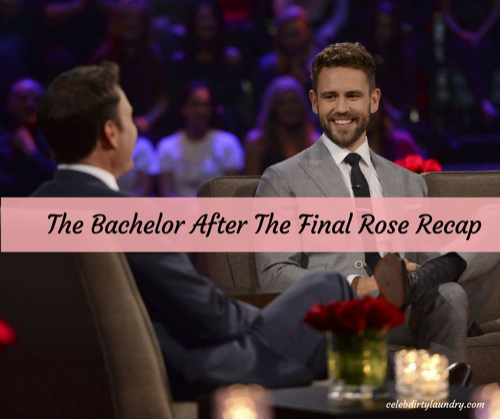 We will be live blogging tonight’s episode of The Bachelor 2017 and you just know there is going to be tons of drama, cat fights, and tears. So come back tonight between 10 PM – 11 PM for our live The Bachelor recap. While you wait for our recap make sure to check out all our The Bachelor photos, spoilers, news & more, right here!

Tonight’s The Bachelor After The Final Rose recap begins now – Refresh Page often to get the most current updates!

Nick Viall takes the stage and joins Chris Harrison, he congratulates him on his new engagement. Vick says that everything is good between him and Vanessa and he’s very happy. But, Chris wants to talk about Raven Gates first. She took being dumped on national television like a champ, but is she still feeling as gracious as she was when they filmed the finale?

Raven joins Nick on stage to discuss their break-up. Raven apologizes for not getting emotional over the break-up and almost coming off as if she didn’t care, she was just in total shock and was trying to process what had just happened.

Raven admits that she definitely thought she was getting engaged at the final rose ceremony. She had been optimistic all season, and getting dumped instead of an engagement ring totally threw her off. Raven always wanted to make their dates fun-loving, she knew Nick was under a lot of pressure, and didn’t want to add any other stress.

Raven tells Nick that she’s very happy for him, and she doesn’t wish any ill will on him and Vanessa Grimaldi. Raven thinks that there is a wedding in Nick and Vanessa’s future, she can see them walking down the aisle together.

Before Raven leaves the stage, Chris Harrison invites her to join Bachelor In Paradise 2017 this summer. Raven happily accepts his invitation, she wants to find love, just like Nick and Vanessa did.

Now, it’s time to hear from Vanessa Grimaldi. She takes the hot seat next to Chris Harrison for a 1-on-1 interview. Vanessa admits that she and Nick Viall have had some difficult days since the final rose ceremony, but at the end of the day, they love each other and they can’t wait to move on as an engaged couple. They have been relying on Face-time to keep their long distance relationship afloat.

Nick Viall and Vanessa Grimaldi make their first official appearance as an engaged couple on the ATFR stage. Nick and Vanessa chat with Chris Harrison about how difficult it was to keep their engagement a secret, and how thrilled they are that they can finally go out in public together.

Vanessa reveals that she is planning on moving to the United States, which is odd since throughout all of Season 21 she kept saying that she didn’t want to leave her family in Canada, apparently she had a change of heart. They’re excited for the next stage in their lives, Vanessa is planning on starting a charity in the US for people with learning disabilities, and Nick will be competing on the next season of Dancing With The Stars.

Vanessa and Nick’s live performance is pretty cut and dry, and basically what we hear from every couple at the end of The Bachelor. They claim they’re getting married, however haven’t made a single wedding plan yet. Whether or not they actually make it down the aisle, let alone set a date, remains to be seen.

Tonight’s After The Final Rose ends with the new Bachelorette, Rachel Lindsay, joining Chris Harrison on stage. And, just like that, Nick and Vanessa are yesterday’s news. Of course, Rachel is thrilled for her ex Nick and his new fiancée. She’s not bitter at all, after all Nick dumping her was probably the best thing that ever happened to her, and she got her own TV show out of it.

Chris Harrison tells Rachel that he has an epic surprise for her – and he is about to make Bachelor history! Chris says that The Bachelorette is going to start right now. Chris has a camera crew bring in a backdrop of the mansion for Vanessa to stand in front of. And, she is going to meet some of her guys right now on live television, on the ATFR stage.

Guy number one arrives and introduces himself as Demario. He tells Rachel that she doesn’t need to meet any more guys, he plans on marrying her.

Next up is Blake, he’s almost as nervous as Rachel and raves that she smells good and hugs her an uncomfortable amount of times.

Guy number three introduces himself as Dean, and informs Rachel that he is “ready to go black and never go back.” Chris Harrison is most likely kicking himself for doing this on live TV right about now. It’s a mess and Dean doesn’t know how to get back off the stage.

Eric comes up on stage next, and he and Rachel have an impromptu dance party after he professes his love to her.

Chris Harrison crashes the party and says that is the end of the guys for tonight, we’re officially out of time, Rachel has to wait a few weeks before they begin filming and she can meet the rest of the guys. But, it looks like Rachel’s season of The Bachelorette will certainly be an interesting one this Spring.