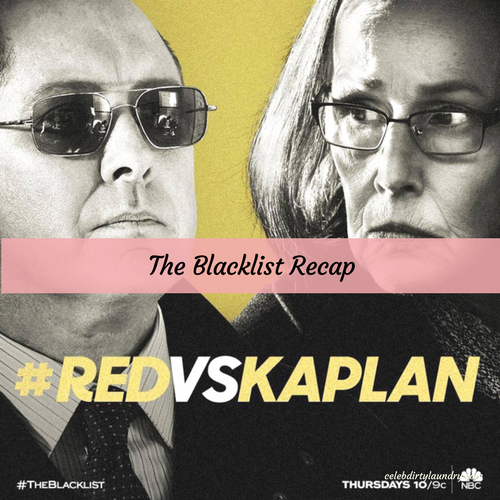 Tonight on NBC their hit drama The Blacklist starring James Spader airs with an all-new Thursday,  April 27, 2017, double episode and we have your The Blacklist recap below. On tonight’s Blacklist Season 4 episode 18 called, “Philomela,” as per the NBC synopsis, “The task force pursues an artful bounty hunter who’s targeting Red’s closest associates. In other events, Ressler faces a moral dilemma when he teams with a former colleague for a new assignment.”

Tonight’s episode of The Blacklist kicks off with a woman named Philomena at a bar – she romances a man named Joe and heads to his car to make out with him. Then, she pulls a stun-gun out of her purse – Joe is shocked when he opens his eyes and finds himself tied to a chair with Philomena and Kaplan standing over him, especially since he knows Kaplan and thought that she was dead.

At the FBI office, Elizabeth Keene is thrilled to hear that Samar was nominated for a Katai Fellowship – apparently it’s a huge deal. Little does Samar know, Aram is the one that nominated her.

Panabaker storms in to the FBI office and doesn’t look happy. 86 bodies were found in an abandoned ice rink, and according to an anonymous tipster they are all victims of Raymond Reddington. Harold reminds Panabaker that the Justice Department is the ones that forced them to work with Red in the first place. She warns Harold that if someone puts the pieces together and links Red to his team – they are on their own and the justice department is cutting ties.

The AG has put a quirky guy on the case, Special Agent Gale, and he’s determined to bring Red down and make him pay for his crimes and all 86 murders. It turns out that Gale is Ressler’s old partner from years ago, he calls Ressler and wants him to help on the case. Awkward…

Howard tells Ressler that he should go work with Gale on the murder case, thay way they can be one step ahead of it and know what’s going on.

Meanwhile, Red and Dembe are hot on Kaplan’s trail. They track her down to the motel that she was staying in a few days ago. Red realizes that the innkeeper was actually recording what was going on in the motel rooms behind the guests’ backs – he demands to hear the tapes. While Red is at the motel, he gets a phone call from one of his cohorts, apparently Joe was dumped at the police station with a financial statement taped to his chest that tracks him to Red and exposes their shady business deals. Kaplan isn’t wasting any time destroying Red.

Red listens to Kaplan’s tapes – he finds one with Philomena on it and rushes back to the FBI to brief them on their next Blacklister. When he arrives, he gets an icy greeting. Harold isn’t thrilled about Kaplan and the 86 bodies. And Aram is disturbed now that he knows that Red shot Kaplan in the head.

Red brushes away their concerns. He reminds the FBI team that the government pays them to track down Blacklisters, not worry about what he has been doing in his extracurricular time. And, their next Blacklister is Philomena.

Red and Elizabeth are out together running down leads. Liz stops at her house to run up and check on Agnes. Red wants to go with her. Elizabeth gives him an ultimatum, if he looks her in the eye and swears that he won’t hurt Kaplan when they catch her – then he can see the baby. Red refuses to make that promise, so Liz leaves him in the car and heads upstairs by herself. She’s shocked to find Kaplan sitting in her livingroom, rocking Agnes.

Elizabeth is rattled, she recognizes the song that Kaplan is singing to Agnes. Kaplan explains that she used to sing that song to her when she was a baby and she used to be her nanny. Elizabeth doesn’t believe her.

Kaplan explains that she new her mother Katarina, and she served Red up on a silver platter to the FBI to make sure that he never interferes in Agnes’ life the way that he has Elizabeth’s. Kaplan slips out and Keen rushes back to the FBI without Red.

Red stops by Dembe’s to check on him, he’s been in bed since he was shot in the leg with an arrow. Red brought along a gift in a box. He tells Dembe that it’s a goodbye gift – he doesn’t want Dembe to feel indebted to him. Red gets choked up and admits that Dembe is his only friend, and he feels guilty for misjudging him. Dembe doesn’t want to accept the gift, he’s not going anywhere. Red tells him to keep the box, and when he does decide to leave him or move on, he can open it.

Meanwhile Ressler is working with Gale on the ice rink full of bodies. Ressler is surprised when he learns that one of the body that turns up is former US Chief of Justice, Diane Fowler. Obviously, the police took her death very serious and they bagged and tagged her entire livingroom as evidence. Gale decides to reinact the entire crime scene. He thinks he may have found some of Red’s fingerprints on the victim’s record player.

Samar and Elizabeth are closing in on Philomena, they learn that her next target is Red’s lawyer Marvin Gerard. And, while they are putting the pieces together, Marvin’s sister has brought Philomena to his house for legal advice. The FBI races to Marvin’s house, but when they arrive, the house is empty and Marvin’s sister was tied up and tossed in a closet. Aram manages to find Philomena’s car en routa, and the FBI chases her down.

Liz and Samar apprehend Philomena, but the car is empty, she already gave Gerard to Kaplan. They bring Philomena in for questioning and demand to know where Kaplan and Gerard are.

Ressler returns to the ice rink, he tells Gale that the prints on the record player didn’t match Red’s. Gale is convinced now someone on the FBI is helping Red, little does he know, Ressler is one of those someones.

Philomena finally talks – she tells Liz that Kaplan is headed to Vienna. Meanwhile, police find Marvin tied to a light pole with plastic wrap and bring him in to custody.

Tonight’s episode ends with Dembe and Red – Dembe is tired of resting, he wants to help Red find Kaplan. But, first they’re going to get some supper together.