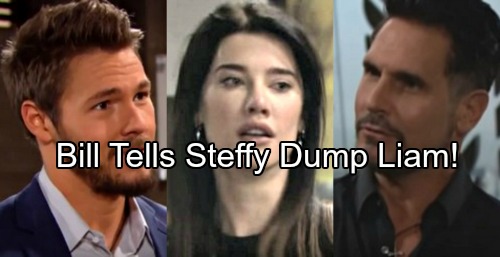 The Bold and the Beautiful (B&B) spoilers tease that Bill (Don Diamont) will feel like he’s made considerable progress with Steffy. Now that they’ve slept together, Bill won’t think Steffy will be able to resist the powers of the stallion. Steffy’s reaction to their hookup should’ve sent a different message, but we’re talking about Bill here. He sees what he wants to see and ignores the obstacles.

Bill will plan a special evening on his mega-yacht, the Stella Maris, and hope that Steffy will join him. When he discovers Steffy and Liam (Scott Clifton) have patched things up, he won’t be pleased. Bill will believe Steffy is choosing the wrong Spencer. He’ll be determined to convince Steffy that he’s the only man for her.

The Bold and the Beautiful spoilers say Bill and Steffy will be at odds next week. They’ll have very different opinions on what their next move should be. Steffy will just want to put this mess behind them. She’ll insist that Bill needs to keep the secret so she can preserve her happy life with Liam.

Bill will argue that Liam has disappointed Steffy before and will do it again. He’ll urge Steffy to walk away from a marriage she’s not 100-percent confident in. Bill will think their sex session proves that Steffy craved more.

Of course, Steffy will snap that Bill’s got it all wrong. She’ll feel like she’s the disappointment after what she did with her father-in-law. The Bold and the Beautiful spoilers state that Bill will make an emotional plea. He’ll urge Steffy to leave Liam and let her true desires guide her. Bill will insist that he wants a future with Steffy and all she has to do is say yes.

Steffy will counter that Bill is being ridiculous. Liam is her husband and she chose him for a reason. They love each other and Steffy wants to move forward with him. B&B fans can expect more arguing, but Bill will eventually agree to stay silent and let Steffy repair her relationship.

Nevertheless, Steffy will continue to be on Bill’s mind. If an opportunity arises, there’s a good chance Bill will sabotage his Liam and Steffy’s marriage. He can be awfully ruthless! We’ll give you updates as other B&B news comes in. Stick with the CBS soap and don’t forget to check CDL often for the latest Bold and the Beautiful spoilers, updates and news.