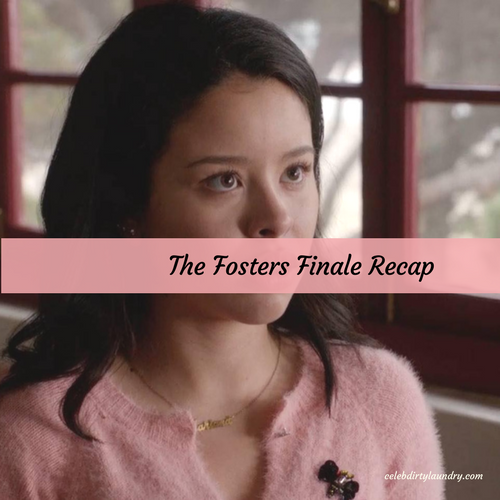 Tonight on Freeform their hit drama The Fosters returns with an all new Tuesday, April 4, season 4 episode 20 called, “Until Tomorrow,” and we have your weekly The Fosters recap below. On tonight’s finale episode as per the Freeform synopsis, “In the Season 4 finale, Callie must decide to take a plea deal and go to jail for three years or go to trial and risk an even longer sentence. ”

Jesus asks Emma if she is pregnant. He tells her that he is ready. They can have this baby together. She tells him she didn’t talk to him because the baby was Brandon’s. Jesus wakes up. Callie and Stef sit down with her legal team, looking at the video footage. Her lawyers managed to get a deal. It’s not good – 3 years.

Stef and Callie leave the office. Callie cries. Stef tells her that they will find a way. Callie doesn’t want anyone at home to know. Emma approaches Marianna. She is mad that Marianna tweeted about her pregnancy. Stef tells Lena about the 3 years over the phone. Stef tries to get her to calm down. They get off the phone. Lena sees Drew. She asks him what is going on with the school. He tells her that changing the institution into a private school would be better for everyone. She needs to get on board. If she isn’t, she shouldn’t come back.

Stef goes through the video footage at the station. She asks Mike to look into a few things.

Lena goes to visit Marianna in class. She wants her to keep her protesting under control. Marianna agrees to no trouble. Lena tells her that Nick’s dad is the one putting up the money to turn Anchor beach private.

Callie asks Jude to go for a walk. They walk the beach. She tells him that Kyle admitted to the murder. Callie tells Jude not to be like her. He smiles – she is a hero to him.

Mike pulls in Doug Harvey for questioning. Mike tells him that he saw the newspaper clippings on the wall of his home in the video.

Callie goes to visit Brandon in his room. She tells him that she is anxious. He asks her if she wants to play a song together with their guitars.

In the other room,  Emma and Jesus are reading separately she wants to know what page he is on. Mariana comes in. She asks them both to attend the school board meeting tomorrow night.

Stef and Mike talk to the captain to tell him about Doug Harvey and newspaper clippings, and the fact that Doug Harvey saw Martha’s grandson at her house the day she was murdered. She reminds him that they don’t want to send an innocent boy to a maximum-security prison.

Jesus asked Brandon if he has ever got someone pregnant before. Brandon tells him no. Jesus tells Brandon that he thinks Emma could’ve been pregnant after seeing Mariana’s Twitter account that is now closed down.

Jesus calls his grandmother to ask her if she remembers the letter that she read him on the day of her wedding. He tells her he cannot find the letter anywhere and he needs to know if she didn’t read anything important to him from the letter because Emma keeps asking him if he read the letter all the way through.

Stef and Lena are in bed talking about Callie’s case and what could happen when Jesus knocks on the door. He has something to tell them. Emma was pregnant and had an abortion. He just found out about it. Emma doesn’t know that he knows yet. He feels weird that the whole situation since he was adopted.

Kelly is laying in my bed Mariana sleep in her bed Kelly cannot she looks around 10 I’m taking everything in the pictures of the postings.

Stef gets a text, Diamond’s pimp is going to meet up with her. He gave her some meth to hold onto.

Jesus confronts Mariana about her Twitter feed and the fact that she never told him that Emma was pregnant.

Mariana and the other students wait outside for the board meeting. Drew comes out and tells them it’s a closed meeting. Mariana see Nick’s father heading in – she confronts him, asking him why he is there. Nick doesn’t even go to school there. She tells him what a horrible father he was. Nick never had a chance with him.

Stef and her partner hang outside the foster home waiting for diamonds pimp to come and get her. Diamond calls 911 and the police show up. Diamond and another girl Christina left the foster home to meet up with her pimp behind Stef’s back.

Daphne and Callie are driving in the car. They see diamond and Christina walking down the street they have backpacks. They pull over to talk to them. Diamond has to get back to her pimp or he will kill her. She pleads with Christina to go. Callie says she’ll take her spot, she has nothing to lose.

Mike and the captain question Troy. He finally snaps and admits to her murder. He killed his grandmother with an axe.

Callie and Diamond get picked up on the side of the road. Mike calls Stef to tell her the news. Daphne shows up to tell Stef where Callie is. She needs to track her phone.

Jesus sees Brandon outside of the school board meeting. He confronts him about knowing Emma was pregnant. He runs off.

The school board votes to turn the charter into a private school. The kids all chant outside.

Callie hides her phone in the van in a bag that gets dumped before she makes it to an Inn where they are brought.