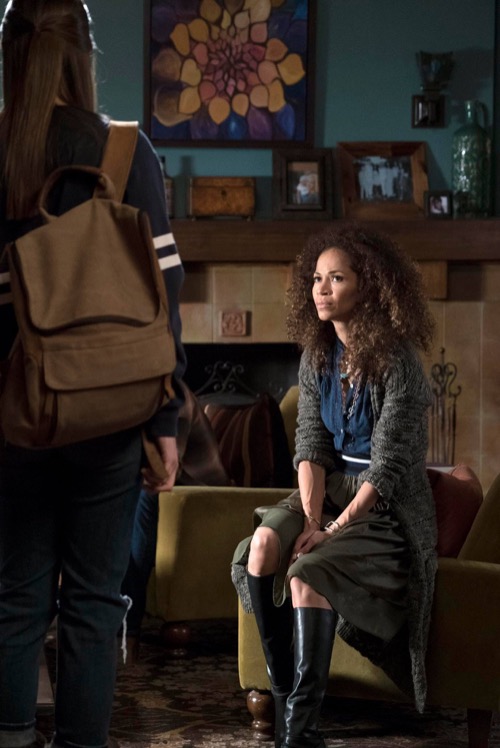 Tonight on Freeform their hit drama The Fosters returns with an all new Tuesday, July 18, season 5 episode 2 called, “Resist,” and we have your weekly The Fosters recap below. On tonight’s premiere episode as per the Freeform synopsis, “In the Season 5 premiere, Stef frantically searches for Callie after she offers to help Diamond; Jesus struggles with his TBI and unleashes his anger after discovering Brandon helped Emma with a deeply-personal decision; and protests continue over Anchor Beach Charter’s privatization, with Mariana leading the charge.”

New neighbors moved in next door. However, the neighbors were the least of the family’s concerns because Callie was still in trouble. She had put her life in harm’s way more than once and it didn’t seem to be hitting her that she could have died. So Stef wasn’t going to let up on Callie anytime soon. She wanted Callie to start valuing her own life and nothing she’s said or Lena said has been getting through to Callie, but the women were fortunate because they could turn to Robert when they needed him.

Robert had thought that Callie was some brave hero when he found out she was looking into her foster brother’s case. But he’s opinion of her had quickly changed once he found out about everything else. So he chose to side with Stef and Lena and together they talked to her. They told her that she needed to focus on where she was going in life and had suggested that maybe she could take up that art school director on her offer just because that might lead to art school one day. And so Callie had tried to do as they suggested yet she hadn’t been ready for the amount of work.

It turns out art school would need to see a portfolio before they could allow her in. Yet, Callie didn’t have a portfolio and she wasn’t sure if she was even an artist. So Callie had told Robert that she could put off art school for a year and that didn’t matter anyways because she wasn’t that sure about it. And, well, that had disheartened Robert. Robert had hoped that Callie had finally found something that was hers and so he had been disappointed when she chose to suddenly drop the dream.

Though there wasn’t anything that Callie’s parents could say to cheer her up. She had given up herself following the failed interview with art school. So Callie had been willing to throw away all her hard work and toss her Senior Project away because she thought that was the best she could do however she had later heard back from Helen. Helen had been her interviewer and she thought that Callie had so much potential that she offered to help Callie build up her portfolio. And the teenager could also sit on a couple of classes to get a feel of the place.

So Callie had thought that she found the path she wanted to be on though her siblings hadn’t been half as lucky and Brandon more than anyone was lost. He had gotten kicked out of his dream school and had found out that he couldn’t reapply for at least a year. However, Brandon doubted he could get into Julliard twice and so he was looking into other music school only he thought he would end up as bum more or less. And that was one of the reasons why he wasn’t going after an older girl that he liked because he thought she deserved better even if she disagreed.

Grace happens to like him as well and she had made a bold move to show him how interested she was however he had misunderstood the situation when he saw her handcuffed to the bed because he thought she had been attacked. But Grace downplayed the whole thing and said her ex-boyfriend had left her there. So Brandon had freed her and had been late to his job interview only he didn’t realize how big of a fool he was until he told Callie about it. Callie had put two and two together and she pointed out that Grace had been making a move on him.

That he apparently missed by the way. Yet, it did help Brandon knowing that she was already interested because he really did want to go after her. So Brandon was hopeful about a possible romance even as Jesus was making it a habit to push everyone away. Jesus was fighting with Brandon and had told Mariana that he wanted to complete their Senior Project on his own to prove to himself that he could do. Except Jesus couldn’t complete the project on his own because there was a chance he would have to repeat the grade and no had wanted to tell him that.

Stef and Lena thought Jesus couldn’t handle it and so they wanted everyone to hide it from him. Though Gabe had cracked and had told Jesus everything. So Jesus had spiraled out and had started breaking things up in his room to the point that Emma didn’t bother telling him that she was there. And, frankly, Emma wasn’t the only one giving Jesus a wide berth. Mariana hadn’t wanted to be sent to her room at the same time as he did because she was afraid he would take a bat to her whilst he was losing it.

However, Gabe seemed to the one person that could calm him down and so the moms didn’t want to kick him out just yet. So Gabe had come through for Jesus. He had found out afterwards that the school was taking money away from Senior Projects so he offered to get the materials donated and that way Jesus could complete the project, but Jesus still hadn’t wanted to do it with Mariana. He instead wanted Emma to be his partner and had tried to tell Mariana as gently as he could and she still had been upset.

Mariana was flirty with the teenage boy that just moved next door yet she had a brother that didn’t want to work with her and the interim school principle had tried to blame her for what happened at the protest as well as Jude getting pepper-sprayed. But while Mariana was left sidelined, Callie had found out that her parents do believe in her and that no one had paid to get her into art school because she had earnt that for herself. So Callie was still trying to adjust to being loved and she had found a new friend in art class that was helping her realize her own self-worth.