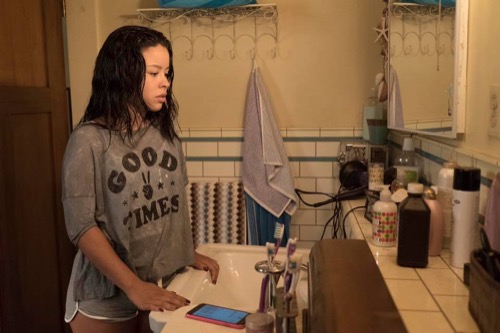 Tonight on Freeform their hit drama The Fosters returns with an all new Tuesday, August 1, season 5 episode 4 called, “Too Fast, Too Furious,” and we have your weekly The Fosters recap below. On tonight’s premiere episode as per the Freeform synopsis, “Callie and Aaron discuss taking their relationship to the next level; Mariana finds fulfillment training with the Latina derby team; and Brandon’s new girlfriend, Grace, catches him playing hero to his ex-girlfriend, Courtney.”

Mariana is walking down the hall at school when she sees some of the engineer club looking at the trophy they won in the case. She walks up to congratulate them. Emma is rude to her, telling her they plan to do some work after class. She’ll let her know when – NOT! Mariana takes it in stride and walks away.

Meanwhile, Brandon and Callie are walking by down the hall past AJ who is with his new girlfriend. It’s visibly difficult for Callie who tells Brandon it is her fault. If she didn’t make things difficult, AJ wouldn’t have cheated. Brandon disagrees. Emma catches up with Brandon after Callie leaves. She has questions about Jesus’ latest outburst.

Jesus is with Lena and Stef at the doctors. The doctor wants him to stay on his seizure meds. Jesus doesn’t want to because he can’t get it up. Lena and Stef are embarrassed and refer to his newest problem, his outbursts. The doc will give him a medication with less side effects. Jesus is happy. He leaves the room. The doctor explains that there isn’t a combination of pills that will make Jesus go back to his old self. Lena cries.

Mariana shows up to meet her new friends who are all practicing their roller derby. They give her some much needed protection and she gets on the track to skate.

Callie and Aaron are kissing in her room. She hears a noise and stops. Aaron tells her that they should go to his house. Stef comes in and interrupts. She saw Cole at the center and he wanted to say hi to Callie and hang out with her soon. Stef leaves. Aaron seems a little jealous.

Mariana practice going around the derby rink with a butt pad on. A girl stops to teach her derby stance. She falls a couple times but keeps getting up. Meanwhile, Jesus calls Emma to tell her about his med change. He asks her what is wrong. She admits that she is scared after he bashed in Brandon’s door and keyboard.

Brandon and Grace are having sodas and talking out on the patio. He asks her if she wants to go to an upcoming festival. She says yes. Jesus comes out yelling. He is mad that Brandon told Emma. He shoves Brandon who shoves him back. Lena comes out and yells at Brandon. Jesus could have fallen and hit his head again.

Grace calls him while he is at Mike’s and offers to have him stay at her house so things can cool off at home. He agrees. AJ comes out of his room with his new girl. He kisses her goodbye. Brandon is annoyed.

One of the girls asks Mariana when she will be back for more practice. Mariana isn’t sure. She isn’t any good.

Ana, Mike, AJ and Brandon are all eating dinner together. Brandon gets a few digs in at AJ about possibly cheating on Callie after Mike asks AJ about his new girl. Brandon asks Mike if he can stay a few days. Mike asks if home is okay.

Callie and Cole are hanging out. Cole shares that he is seeing Marissa. Callie shares that she is dating Aaron. Cole is surprised. He didn’t think she would see someone like Aaron. Callie asks about how to approach sex.

Mariana is back at practice. They think she has potential. Meanwhile, Ana is in one of Mike’s draws when she finds a diamond ring. AJ sees this through the crack in the door. He comes in. Ana didn’t think anyone was home. Ana admits what she found. AJ is surprised.

Grace shows up at Brandon’s to hang out. She missed his text that he couldn’t hang out. He is busy babysitting Mason, Cortney’s kid.

Cole asks Callie what she wants when it comes to sex. She isn’t sure how to answer.

Brandon, Grace and Mason play outside. Jesus shows up at school to see Emma. He wants to know if they are done. She doesn’t want to be. Jesus tells her not to be afraid. She is, she’s afraid he is mad at her for having an abortion. He admits he was angry. Emma tells him that she wasn’t ready for a baby. It was her choice. He tries to explain himself, but Emma tells him to save it. She walks away.

Mike and Stef talk about the issues between Jesus and Brandon. Mike tells Stef that he bought an engagement ring. Stef asks if he thinks Ana is ready for that. Mike seems doubtful.

Callie is kissing Aaron, complimenting him on his masculinity like Cole told her. Aaron asks what’s up. She thought he would like it. Aaron tells her that he doesn’t like it. Callie explains that she spoke to Cole. Aaron is upset that she talked to Cole. She doesn’t know who to talk to. Aaron explains that he isn’t ready for sex. He wants to make sure that he isn’t Callie’s rebound. She is insulted. She leaves.

Brandon, Grace and Mason are still playing. Brandon is playing like a monkey when Stef comes in. Stef asks where Cortney is. Grace picks up on this. She didn’t know Mason was her kid. After Mason falls asleep, Grace has a lot of questions about Brandon and Cortney’s relationship. He explains that he doesn’t want to move to fast with Grace and make the mistakes he made with Cortney.

Mike and Ana head out to dinner. On their way out Callie shows up to see AJ. Callie wants AJ to face that it wasn’t her fault he cheated.

Callie goes back to Aaron’s. She tells him that this isn’t a rebound thing. But she is hurt still. So she doesn’t want to have sex yet. They talk freely about sex and when they are ready how to deal with it.

Mariana looks in the mirror at her bruises. Lena comes in and sees the bruises. She is alarmed. Mariana tells her she fell.

Cortney picks up Mason. She explains to Brandon that she is staying at a motel and couch surfing until her new apartment is ready.

Jesus freaks out after Lena and Stef tell him he can go back to school but with a para aid. He says that he is going to drop out.

Mike and Ana come home. They are engaged! Cortney and Mason stay in Gabe’s room while he is gone. Grace texts. Brandon ignores it while he helps them make their beds.