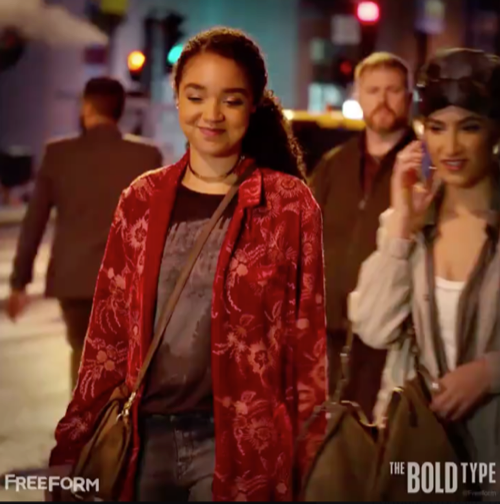 Tonight on Freeform their hit drama The Fosters returns with an all new Tuesday, July 25, season 5 episode 3 called, “Contact,” and we have your weekly The Fosters recap below. On tonight’s premiere episode as per the Freeform synopsis, “Callie and Aaron go on their first official date; Mariana and Jude spearhead an underground school paper; and Mariana is introduced to the roller-derby world.”

Mariana was starting an underground school paper. The official one had gotten shut down after the staff had started to write about the transition from a charter school to a private school however Mariana had had a lot to do with that as well. She had hacked into the school paper and had put in an anonymous article detailing how the school board sold them out so Mariana was simply continuing what she started with the school paper. But ensuring the board couldn’t censor them and circumventing their direct orders to shut down the school paper was a step too far for Callie.

Callie had been in and out of trouble all year. However, their mothers had put their foot down and had told Callie to straighten out her act. So Callie didn’t want to risk angering them by helping Mariana with her paper though Mariana hadn’t thought that was fair. She alluded to what Callie did for other people like helping someone get out of prison and entering prostitution so she didn’t understand why her sister wouldn’t just help with the paper. Except Callie was trying to turn her life around and focus on her art.

Callie was still taking classes at the Art School and she had found out that she had to do a self-portrait. Though she didn’t really know how to go about doing that. She said she didn’t know how she saw herself and so her family had tried to help her with that by offering up suggestions yet Callie couldn’t decide between them all and so they focused on the element of surprise. The others had said that that they were going capture a candid photo of Callie when she wasn’t looking and that she could pick the one she felt best described her.

Yet, everyone had the same idea on how to get that candid photo. They all kept jumping out at Callie to get a picture of her and that merely made her even more nervous when she started to get ready for her first date with Aaron. Aaron had asked Callie out and she had let him plan everything. So she didn’t know what they were doing until he told her that he bought the movie tickets and that he wanted her to wear a dress, but Callie didn’t often wear dresses and so she had scrummage for a while before she settled for one.

So Mariana had tried to be nice and she had offered Callie a dress to wear however Callie had laughed at the idea of wearing something from Mariana’s closet and Mariana had heard it. She wanted to know what was so funny and so Callie tried to downplay it because she didn’t want to hurt her sister’s feelings. But clothes and the school paper weren’t the only things that the sisters disagreed on. They had also had different opinions about Roller Derby seeing as Mariana was interested in taking up the sport while Callie was concerned about their mothers again.

Stef and Lena were against contact sports and this was something they brought up recently after they invited the neighbors. The neighbors as it turns out have a son that’s into football and so he passed on Anchor Beach because the school didn’t have a football program. Yet, both Stef and Lena had spoken about that and had asked the boy’s mother Tess about whether she was fine with football. Tess was a doctor after all and so she more than anyone should know the risks though Tess said that her son loves football and that it came with its own benefits.

Tess and her husband believed that helped boys get rid of their pent-up aggression and that was something the others could agree to as well. Though Mariana had voice her own concerns about how girls were actively discouraged from contact sports and how they had aggression too. So that started a little spat between her and Jesus. Jesus had joked that girls had Twitter to vent and so Mariana had said that Emma would break up with him if she ever found out how sexist he was. And so that’s what truly started the spat because Jesus was worried Emma wanted to break up with him.

Emma hadn’t bothered answering any of his texts or phone calls since she went to World’s for S.T.E.A.M. However, she had been acting differently even before that. So Jesus thought that Emma didn’t want to be in a relationship with him anymore and that on top of his condition was making him more confrontational than usual, but Stef and Lena later talked to Tess about that as well and she said that it was expected. She had known of a few similar cases in which the affected person needed a monitor because they couldn’t control their temper. And so she thought that family could try that.

Only Lena didn’t want to have Jesus tested so soon. She thought that Jesus was a bright and sweet young man that just needed time. So Lena tended to snap at people that pressured into making a decision about Jesus and she that with both Tess and Stef. Stef and Tess knew each other back when they were younger and Tess had been Stef’s first crush. But Lena had let some of her own doubts color her thinking and she realized in the end that Jesus wasn’t the same. She later told Stef that there were times when she was afraid of him and unfortunately Jesus had overheard that.

He now likes to listen in on conversations because he’s never quite sure when they’re telling the truth. However, Jesus had been so caught up with what’s been happening with him that he didn’t realize that Mariana was also coming going back to secret-keeping. She had started a new school paper and then had used the STEAM club to help distribute it so that got them into trouble. S.T.E.A.M. Club had gotten suspended because it had been one of their drones used to deliver the paper and so the other members blamed Mariana for what happened.

They told her the reason why she wasn’t at World’s with the others was because she didn’t know how to be on a team. So Mariana had gotten so upset that she decided to stop delivering the paper and she also forged her parents’ signatures on a permission slip for Roller Derby.