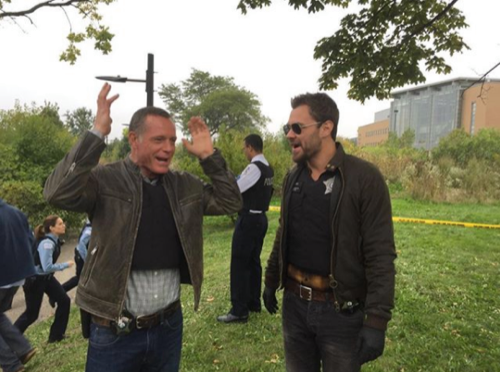 Voight meets Olinsky at a cafe and shows him a photo of a guy, its the junk Voight found breaking into his car, Olinsky says his name is Rubin Gilbright and his guess is that they are going to use this guy to build a homicide case against him. Ray puts a gun to Adam’s head because someone sees him and he was protecting his cover. Ray asks Adam for a loan, Adam says it is the last one.

There is a call, shots are fired and Adam leaves but warns Ray not to ever put a gun to his head again. Ray and Kevin arrive at the scene to find two men down and non-responsive. They hear a women crying, they rush to the door and find a boy hurt, Kevin calls for help immediately but it looks like it is too late for the boy. Kim asks the boys mother if she saw anything, she says that she saw two Latino men runnings down the stairs, they had ski masks and took off in a dark car. The little boy, Felix, is dead. Voight tells Olinsky he knows where Rubin is, Voight tells him to back off, he will take care of it.

Voight finds Rubin and searches him, he finds nothing and lets him go. Adam goes to see Ray and tells him about the shooting and the little boy being killed, he tells him to get info. Adam got intel on two Hispanic banners moving product in a vacant house, they head out to get the two guys. At the house, they bust in and the two guys try to get away but they don’t make it. Antonio tells everyone to tear the house apart, they do and they find drugs.

Voight tells Haley to call Felix’s mother and see if she can id the two guys. Adam shows one of the guys a photo of Felix dead and he laughs, he tells Adam that what is funny is a Chicago cop acting like he cares about a Mexican war, Adam jumps him but gives up quickly and lets him be. Felix’s mom couldn’t id the two guys. Adam goes to see Ray and tells him that he gave him false intel, the two guys are innocent and have an alibi. Ray promises to go back out there and get him the intel. Voight sees Rubin go into a meeting, he follows him and sees that it is an alcoholic anonymous meeting.

Voight and Dawson speak to Kenny, tell him that they think someone in his squad is linking intel to the rip crew. Voight says in the last few months his crew issued more warrants than anyone else. Voight says they have to set up a stash house to leak out who is behind this. Voight is alone with Olinsky and says that he spoke to Jimmy at the pension station and asks if there is anything he wants to tell him. Olinsky says it’s not what he thinks. Voight tells Olinsky about Rubin, he is trying to go clean and has been sober for a year, but tells him not to worry about, they will find a way out of it.

The set up is in place and two Hispanic guys show up in ski masks, they think they have their guys. A shootout erupts, only one of the guys is alive, the other is dead. The one that is alive, his name is Moldando and his weapon is a match to the gun who killed Felix. Voight is happy, he thinks they got their rippers. Voight believes he found the person who was leaking intel to the rip crew, detective Roehaus, one of Kenny’s but she is highly decorated and doesn’t seem like the type of person who would do this. Moldanado is dead, but they have intel on his cousin Frank and even though it is a long shot they decide to chase him.

They bust into the guy’s apartment and find him flushing coke down the toilet. Frank tells them the leak is a dirty cop and meets at a bar named Nemos. It turns out that Ray was the one in nemos and Roehaus thinks he stole her password. It turns out that Ray was planting the heroin in the house. Ray tries to make a run for it, but Adam catches up with him. Ray tells him to look the other way and Adam says no, he tells him to get on his knees. Ray walks closer to Adam who warns him to stop moving closer to him. Ray is apprehended and he shouts at Adam that he should have just shot him. Trudy finds out that Olinsky’s pension has been flagged and asks Voight about it but he won’t say anything.

Meanwhile, Rubin gets pulled over, drugs are planted in his car, he is arrested and Olinski looks on from a car. Olinski then meets with Voight who tells him it looks like Rubin was using again and he was apprehended. They both know it is a setup.