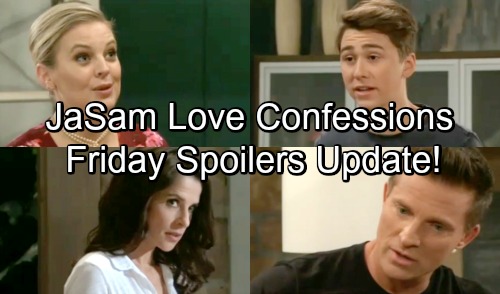 General Hospital (GH) spoilers for Friday, October 5, reveal that Liz (Rebecca Herbst) will have some questions for Aiden (Jason David). He’ll end up at GH, so it’s possible he feigned illness to see his mom. Liz will speak with Aiden in an exam room, but she won’t seem very concerned about his health.

Instead, Liz will be worried about Aiden’s emotional well-being. She’ll feel like something must’ve upset Aiden at school, so she’ll push her son to open up. Franco (Roger Howarth) will be on hand to get some answers, too. It seems likely that Aiden has been bullied, just as Cameron (William Lipton) predicted.

Aiden’s Princess Calinda of Everwood pencils probably earned some teasing from his classmates. If not, there must’ve been some other reason Aiden was ridiculed. Franco and Liz will do whatever they can to show Aiden he’s loved. They’ll also work on a game plan to prevent bullying, but that may be impossible. General Hospital spoilers say more school issues are looming in the coming weeks.

In the meantime, Peter (Wes Ramsey) will give Maxie (Kirsten Storms) an explanation. She’ll want to know why he’s avoiding her, so he’ll try to help her understand. Peter hates the fact that he hurt Maxie. He doesn’t want to do any additional damage, so he feels like staying away is his best option.

Since Maxie will have a different opinion, they’ll have to hash things out and try to get on the same page. Back at GH, Oscar (Garren Stitt) will defend his choice. He decided to drop out of school and fully enjoy the time he has left. When Kim (Tamara Braun) and Drew (Billy Miller) try to send Oscar back, he’ll argue that they’re taking control again. Oscar will just want to make some decisions for himself.

Across town, Josslyn (Eden McCoy) will snap that this breakup isn’t real. Cameron (William Lipton) may think Joss should accept that it’s over and move on. He knows Oscar could be fading fast! Josslyn will once again urge Cam to spill what he’s hiding, so he’ll definitely be tempted. He’ll decide he can’t lie for Oscar any longer, but will he confess or give his frenemy a final opportunity?

At the boxing gym, Kiki (Hayley Erin) and Griffin (Matt Cohen) will discuss where they stand. After they finish up that steamy lip lock, they’ll determine that nothing’s holding them back. They might as well give dating a shot and see where this romance might lead.

Jason (Steve Burton) and Sam (Kelly Monaco) could be left wondering about their own future on Friday. Danny (T.K. Weaver) just asked if Jason loves Mommy, so he’ll naturally say yes. That’ll bring the follow-up question of whether Sam loves Jason. She’s eavesdropping nearby, so now’s her chance to jump in and express her love, too.