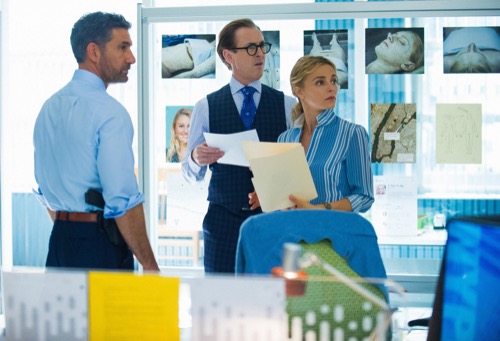 We see a young girl, she is talking to her mom on the phone and tells her she needs a favor, tell her dad she can’t meet him because she has a test – she is packing her bag.

Next, we see a homicide victim, it appears to be the same girl. Dr. Dylan is in class, he starts talking about psychopaths make up 1% of the population so there are two of them in class right now – then he tells them to enjoy their walk to lunch and everyone laughs. Dr. Dylan gets a text from Lizzie, meet me at pier 48 when you are done.

At the scene, Dr. Dylan is surprised to find out that the victim had her heart taken out – she has no wallet, no phone and no ID of any kind. Lizzie notices that the label on the victim’s jacket is a Gemma Kadin, a designer downtown – they head there. At the store, Lizzie asks who purchased the jacket in a size 3, it turns out that her father, Mr. Fallon did and his daughter’s name was Maggie.

They go to see Mr. Fallon and tell him what happened, they also ask him if he can identify her and he says no. They head to her apartment and surprisingly when dad opens the door, Maggie is there. Maggie identifies the victim, her name is Amy Jenkins, they met online through Stay B&B – she wanted to rent out her apartment and was in town from Ohio for the week.

Maggie is wondering why Amy is wearing her jacket Lizzie says she probably stole it. Dr. Dylan doesn’t buy the story, the murder is way too personal. If Amy didn’t know anyone in the city, why would someone want to cut out her heart? Lizzie thinks maybe it was a case of mistaken identity because the girls look so much alike. Dr. Dylan notices fresh flowers in the garbage and Maggie just installed new locks.

Maggie says she has a stalker, he sends her photos – she complained to the local police the previous week. Dr. Dylan and Lizzie leave the apartment and he says to Lizzie, did she notice how the dad didn’t look nervous when they first went to see him. Dr. Dylan says that he never thought the dad would be such a loving father with a pinky ring.

They get the photos of Maggie that the stalker sent her, they are all taken from the same place. The find a florist and figure out that this is the guy working there that was sending Maggie the flowers. Lizzie and Dr. Dylan can tell that this is not the guy who cut out a person’s heart. They head to Andy’s bar and have lunch. They then head to the morgue and find Doug laying on a table – he says the victim had no signs of a struggle and no drugs in the system. Dr. Dylan tells Lizzie to distract Doug while he goes to get a fingerprint from the victim.

Dr. Dylan goes to see Julian to get him to analyze the fingerprint. At home, Dr. Dylan is at the piano and thinking about the case, to blonds, the same jacket, did they kill the wrong girl – he can’t figure it out. Andy comes in and tells him to stop being obsessed with this case. Andy says he is sorry that someone died, but he is worried about him and wants him to talk about it.

At the station the next day, Lizzie tells Dr. Dylan that he needs to respect how they do things around here. Lizzie says that the killer surgically knew how to take out that heart. Julian calls, he tracked the victim’s fingerprints, her real name is Beth Lennon from North Dakota – 27 online identities, lots of complaints about her stays at B&Bs. Dr. Dylan goes to leave the station and he has a flat tire, two cops watch him and he leaves by showing off and doing a wheelie.

Dr. Dylan meets with Julien and who tells him that he looked into his homicide squad and found evidence of an opened CIA FBI MI6 task force who were investigating a smuggling operation that uses NY ports. They were zeroing in on a detective Chalie Pavlik, he was killed in the line of duty.

Julian doesn’t know the details yet but he does know that the investigation is ongoing and leads him to believe that there are others on the team who may be compromised – meaning Lizzie, his former partner. Julian implies that Lizzie might be dirty and asks Dr. Dylan if he should keep digging, he says no, he trust Lizzie and knows she is not dirty.

Lt. Gooden and Lizzie are going through the dating apps that the victim used and narrow the list down to a doctor she had a date with the day she was murdered, Dr. Damien. Lt. Gooden asks Harris to get a warrant but Lizzie doesn’t want to wait, she wants to make a date with Dr. Damien. Lizzie is at Andy’s bar waiting for Dr. Damien, Dr. Dylan is behind the bar to keep an eye on her.

They start talking, she asks him what his specialty is, he says he became a doctor to heal those in pain. It turns out Dr. Damien is a Kinesiologist. Lizzie ends the date there and shows him her badge, he says she left before the cheque was even paid, he tried to chase her but he couldn’t catch up with her. It’s midnight and Dr. Dylan finds Lizzie at the station.

The next day, Joan comes over and Dr. Dylan talks to her about the case. Lizzie and Dr. Dylan get a video from a street video, they find a video of the victim, someone attacks, injects a needle in the back of her neck and she collapses. The guy who was stalking Maggie comes into the station, he is hurt by a young guy who was ripped. Dr. Dylan thinks he may have figured out why the victim was killed.

Frank is a black market organ broker and a guy named Onishi bought a heart for her daughter but she never got it, she died of congestive heart failure. It turns out that Frank ended up selling the heart to the highest bidder and it was not Onishi. Out of revenge, Onishi attacked the victim, thinking it was Maggie.

Dr. Dylan and Lizzie rush to where they know Frank is having lunch with his daughter, they are worried that Onishi is there and will find out Maggie is alive and try to kill her. They find Onishi, he confesses but he injected himself with something and tells Lizzie they can’t save him, he is going to die. Dr. Dylan goes to see Andy, he tells him that he needs him – Andy tosses him a Sheriff’s badge.