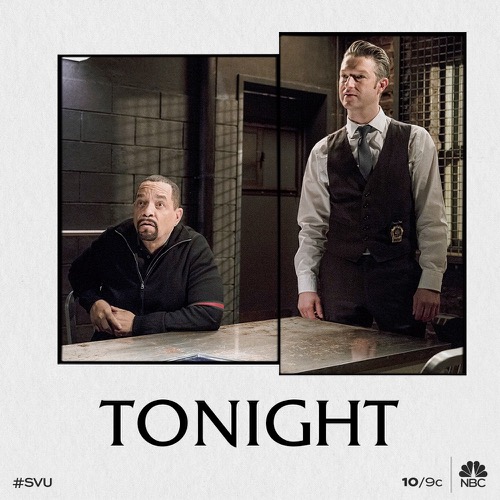 Tonight on NBC Law & Order SVU returns with an all-new Thursday, October 25, 2018, episode and we have your Law & Order SVU recap below. On tonight’s Law & Order SVU season 20 episode 6 called “Exile” as per the NBC synopsis, “A young woman wakes up in the hospital with no memory of her assault, and Carisi’s investigation stalls when she disappears.”

A victim came to at the hospital with no memory of what happened to her on tonight’s all new episode of “Law & Order: SVU”.

The victim later said her name was Grace Walker. The last thing she remembered was that she went to bar and got drunk however her tox screen as well as blood alcohol level indicated she was blackout out drunk. She also had drugs in her system. The reason Grace couldn’t remembering anything was because she had been in no condition to remember anything much less consent and so unfortunately it was believed she had been sexually assaulted. She wasn’t found with her panties or her wall and the police has a reason to believe she had robbed at top of everything else. Benson and Carisi talked to her about what she could recall at the bar and she said she met some guy whose name she was sure started with a “D”. And so someone sent to go to the bar while Carisi’s job was to stay with the victim.

Grace had later gotten cleared to leave and she hadn’t wanted to stick around. She said she didn’t want her boyfriend Tommy to find out and then later she told Carisi she didn’t want the doorman to see them together because the guy was too nosy. The detective decided to go up a little on the block and hadn’t watched as Grace entered the building alone, but when they tried to go back to question her they found out that Grace had lied. The number she gave the police had been for a sorority house and the building she claimed to live in had no knowledge of her. Grace had lied about pretty much everything and that made things worse for her because they did find the man that assaulted her. He and his buddy Drew had been at the bar and this Silas Perry said that he hadn’t raped anyone because Grace had attacked him.

Silas claimed that he partied with Grace and that they even had consensual sex. He also said that Grace went for his money clip and that he had to knock her over the head with her own pipe because she was trying to rob him. Silas hadn’t robbed her by the way because Grace didn’t have a wallet or cash. She liked using guys to buy her things and the only other thing she told Silas was that she liked pancakes. She told him that she had this favorite spot and so the police went there looking for her. It turns out to be a homeless shelter. Grace stayed there occasionally and they found her alleged boyfriend. Tommy has breakfast with her sometimes and he was more friend than anything else. There was a grain of truth in every lie that Grace told the police and they thought that maybe her phone number at the sorority house was once hers.

They were right. Grace had gone to school at Spence College and she had been at that sorority. Her real name was Sophie Simmons and her parents reported her missing three years ago after she disappeared one day. Sophie’s friend thought at first she was spending the nights with a guy she met and they got worried when she never showed up again or attended class. Something happened all those years ago and since then Sophie has been going by the name of “Grace”. The police found her on a homeless app panhandling and they got to her right about the time Tommy was beating her up. It turns out he was her boyfriend. He was beating her up and calling her whore for getting raped though Grace didn’t seem to care. She hadn’t wanted to press charges against him or Silas because she said she got greedy.

Grace admitted to selling sex and that she went for the money clip because she wanted more money. Her testimony meant the charges against Silas were dropped although Benson still had a few questions. She wanted to know why Grace was putting up with someone like Tommy beating her up and she said that she had no choice because Tommy protected her. Benson knew that wasn’t true and she asked Grace about herself. Like her real name or what her parents name was. “Grace” couldn’t remember and she had no memories until she saw her dad again. It was seeing him that brought her back to Sophie. She remembered seeing him Freshmen Weekend and didn’t remember anything that happened since she became “Grace”. Benson had gotten the psychologist to take a look at Sophie and the doctor was of the opinion that the young woman suffered from a Dissociative Fugue Disorder.

Sophie was either traumatized at college or something reminded her of a much earlier trauma,  so to distance herself from it she became “Grace” and basically killed her old identity. Benson wanted to help Sophie and she personally went with the young woman back to the college. They walked around for a while until Sophie didn’t want to go into a room and they went anyways. Being in that room, Sophie remembered that her college professor had raped her and after that she let her other identity take over. Sophie even manage to recall her life as “Grace” and she was in so much pain that Benson promised her justice. The lieutenant said that she would feel better if she could look her rapist in the eye and tell the world what he did to her. And unfortunately that was never going to happen because Professor Adams died a year ago.

Sophie spiraled after that and she even back to the streets, but Benson realized that if Sophie could confront her rapist that she would freer and so she took Sophie to the professor’s grave.

Sophie read her letter at her attacker and she made peace with losing three years of her life.

She’ll probably always need to seek treatment though being able to express her anger and her frustration had put her on the right path.