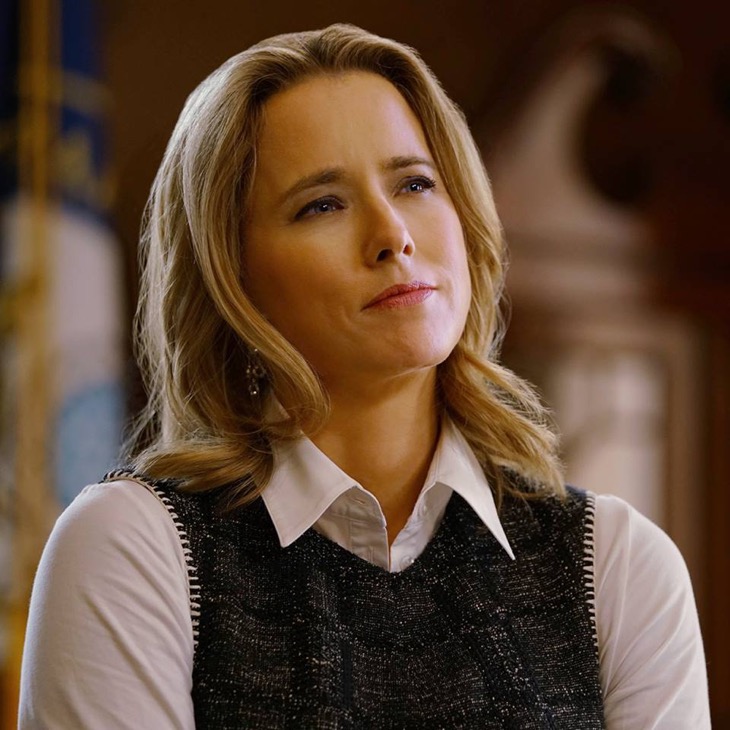 Tonight on CBS Madam Secretary airs with an all-new Sunday, April 1, 2018, season 4 episode 16 called, “My Funny Valentine” and we have your Madam Secretary recap below. On tonight’s Madam Secretary episode, as per the CBS synopsis, “As the 20th anniversary of the American embassy bombing in Mali approaches, emotions run high among the State Department staff, who had personal connections to lives lost that day, including Elizabeth, who must decide if the U.S. should lift sanctions against the country deemed responsible. Also, Henry tries to help Jason break up with Piper.”

It’s Daniel’s birthday party in the office, Pete asks Marla for dinner goes to leave, he is in the stairwell and all of a sudden there is an explosion. Pete goes back into the office, Daniel is there and his eyes have been damaged, he can’t see. Pete finds Marla, she appears to be dead. Elizabeth is advised that she has to give some brief remarks, followed by the names of all the victims and then there will be a moment of silence, followed by a small reception. Elizabeth disagrees, she is not looking for a parade, but there should be more than a small reception since they are commemorating the 20th anniversary of an attack that took the live of many people. Elizabeth wants everyone’s names mentioned who died. Jay asks Elizabeth if she wants him to scale up the memorial, she says its ok as long as they say all the names it should be ok.

Elizabeth tells Jay that even though Special Envoy Peter Harriman can be a pain, go easy on him because he survived the bombing in 1998 – Jay says he will do it. Jay is with Pete in a meeting and Pete asks him why the White House is so eager to lift sanctions all of a sudden, Pete says something stinks. Kat says that Sudan has done what they wanted, they have stopped supporting terrorism, they are allowing more food aid to the population so in short, the sanctions have been lifted because they worked.

Pete thinks it is too soon to lift the sanctions and they should keep the boot on their neck. Everyone in the meeting agrees to keep the sanctions in place. Henry arrives to have lunch with Elizabeth, he brought a brown bag and they are going to the park. Matt tells Elizabeth that they may have found a way to cut through the noise on the embassy security funding issue; bomb sniffing dogs. They want to make a video of Elizabeth and a dog, that is adorable, to put pressure on congress.

At the park, Elizabeth tells Henry she snapped at her staff regarding the memorial. She goes to say that she has to acknowledge her own failure at the memorial. The next morning Jay tells Elizabeth they need to talk, the CIA has been expanding its relationship with Sudan and they are pretty far down the road in building a base there – that is the reason for the urgency to lift the sanctions. Elizabeth is standing her ground, she does not want the sanctions lifted and doesn’t trust Sudan. Conrad wants to get to the bottom of Sudan’s finances first, he gives Elizabeth three days.

Elizabeth and Jay find out that the Forensic Accounting unit has been finding that Sudan has been getting money out through slight of hand and there is no way of tracing it. Pete says that wants the money passes through it is clean and hard to track. Although there a few that they were able to drill down the Forensic should have some information soon. Pete tells Elizabeth that he disagrees with lifting the sanctions.

Matt & Daisy are looking for a dog, Matt finds a dog names Waffle, but he is told that this one is a washout. Henry is at home, he and Jason chat and he tells Henry that he has had enough of Piper, she is too controlling and clingy. Henry gives him advice to tell Piper to her face if he doesn’t want anything more to do with her. Pete gives Elizabeth his resignation, she says she won’t accept it. Pete says he has been stabbed in the back and stays firm, she asks him to please give her a few days. She then offers for him to speak at the memorial. Pete refuses and gets angry, he says he doesn’t understand why he is here and all the people who died are not.

Elizabeth is in with the president, she expresses her concerns about the sanctions being lifted but it looks like since the department cannot find anything to not lift them, they will be lifted. Elizabeth is called in by Jay, Forensic Accounting found something. It turns out that the Al-Quaeda money man behind the bombing in 98 was supposedly killed by a drone strike, but now it appears he wasn’t and he is in Sudan.

Elizabeth calls the president and tells him that Sudan is harboring a known terrorist for years and that is violating the terms of the sanction. Elizabeth wants to slow play lifting the sanctions and grab the terrorist. At home, Elizabeth tells Henry the whole thing makes her sick that the terrorist responsible for the bombing in 98 is still alive. Henry tells her that he told their son to tell Piper to her face about their relationship, Elizabeth tells him to butt out of it. Henry goes to see Jason and tells him that he is driving him over to Piper’s house to talk to her in person. Henry goes in with him, he grabs a coffee with Piper’s mom. It doesn’t take long and Jason comes into the kitchen and announces they are leaving.

The next day, Elizabeth is giving her speech at the memorial. Her speech is followed by a moment of silence, Pete can’t take it and walks out. After the memorial, Matt tells Daisy that she needs a companion, Waffles. Jay tells Elizabeth that have intel on their terrorist. Elizabeth speaks to the Foreign Minister of Sudan and she tells him that they learned something of concern, that Albosha, the terrorist is alive and in Sudan. The Foreign Minister promises they will do everything they can to find him.

Back home, Elizabeth talks to Henry about going over to Piper’s house – they laugh at the awkward situation when he was having coffee with Regina and Jason came out and announced they were leaving. The next day, Elizabeth tapes her video with the dog. Elizabeth sees Waffles and falls in love with him, she asks him if he wants to go home with her and Daisy announces that she already committed to adopting Waffles. Later Elizabeth, Henry and the president are talking when there is a knock at the door, the seals are inside Albosha’s compound.

The next day, Elizabeth calls the Foreign Minister of Sudan again and tells him that they are going to wait a year to lift the sanctions and when it comes to avenging harm to her people, they never forget. At home, Jason comes in the house with Piper while he was just on the phone about to apologize to Regina, he hangs up. Henry asks Jason what is going on, Jason says that he realized that he wanted some space but not infinite space, the are back together.

Elizabeth calls Pete in and tells him that she accepts his letter of resignation and she has recommended that the President name him the next Ambassador to the UN. Both try to apologize to each other, but Elizabeth tells him that she was in the Bin Laden issue station in 98 and they knew something was coming and couldn’t figure things out in time and for that she is profoundly sorry. He tells her not to beat herself up about it, they all failed and he forgives her. He goes on to tell her his guilt that his family was ok when other family’s loved ones died. He goes on to tell her about the women he was having the affair with and tells her that he was the love of his life.