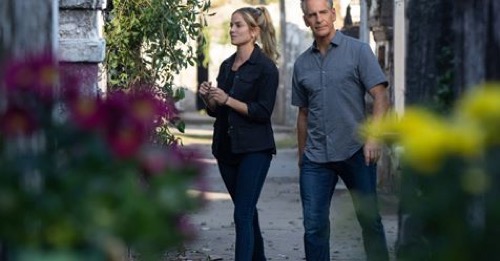 Tonight on CBS NCIS: New Orleans returns with an all-new Tuesday, December 11, 2018, season 5 episode 10 Fall Finale called, “Tick Tock,” and we have your NCIS: New Orleans recap below. On tonight’s NCIS: New Orleans episode as per the CBS synopsis, “While on a sunrise jog, Pride is grabbed by two masked men who order him to complete a series of tasks in order to save Wade and his father, Cassius Pride, who are being held captive.”

Pride was kidnapped. He didn’t who was behind it, but they grabbed him on his morning run and threw him into the back of a van. Pride had tried to reason with them and didn’t fight them. He used the fact he was willing to comply as a weapon and it got his kidnappers talking. They told him that they wanted him to do everything they said or they were going to start killing their others hostages. There were Pride’s father Cassius and Dr. Loretta Wade! There were also three more that the kidnappers had and unfortunately those people remained under the black bags because they weren’t directly important to Pride. And luckily that hadn’t mattered to Pride because he cared about everyone that had been endangered.

Pride agreed to do whatever he had to safeguard everyone and so the kidnappers let him out in the middle of the road with the only way of contacting them – an earpiece. The man that seemed to run the show had issued orders to Pride through that earpiece and Pride had to follow him because the man could hear everything. He could hear when someone asked Pride if he was alright and he advised Pride to talk to no one. Pride was ordered to get into a car and to drive back to his office in Bellchase. He had only an hour to get across town and so he raced a bit. Pride was driving over the speed limit when a State Trooper pulled him over. They were following since almost ran into another car and so they demanded answers.

Pride had had to get permission to speak to the officer and so he identified himself. He said that he was Special Agent Dwayne Pride of NCIS and that he was rushing to a crime scene. The police officer had understood the rush and he said that he should escort Pride in order to help clear the way for him however the kidnappers didn’t want that. They told him to get rid of Trooper or they would be consequences and so Pride tried to get rid of him. He told the other man that he didn’t need help and said that it was important that he go on his own. Pride had been so adamant that the Trooper became suspicious and so that’s when the kidnappers struck. They shot and killed the police officer before telling Pride to keep driving.

Pride believed that he could have talked the trooper down and he argued against the senseless violence. He didn’t understand the rules and he tried to get the mystery man to renegotiate, except there weren’t going to be any renegotiations. The mystery man told Pride to get back to the office and then he directed Pride to the safe in his ASAC’s room. There were going to be a file listed information on something called Operation Copperhead. Pride found the file and was then ordered to start driving through before he could even leave the building he was confronted by Agent Khoury. Khoury had been called out to the crime scene of the State Trooper and she wanted to know why he fled the scene.

Pride said that he could talk to her in a minute and then he directed her to a room before he fled the scene. It hadn’t taken Khoury long to realize something was up and she thought it might have to do with the CIA file she had seen. She called the others and they all told her disturbing news. They said that Dr. Wade wasn’t at her office and that Cassius was also missing. The team put two and two together and realized that someone was forcing Pride to act of character. They figured it had something to do with the CIA file that Khoury had seen and so they did some research. They started asking around about what the CIA was doing in New Orleans and they were also tracking down Pride.

Pride had gone to a house out of the way and there he had been forced to free Amelia Parsons. She was the woman that tried to take down Pride and when they didn’t work she tried to kill him, but NCIS arrested her and they all believed she had gone to prison. Instead, she had used the information she had to make a deal with the CIA. The CIA wanted to know about Apollyon. Apollyon was a Private Intelligence Firm. They were comprised of former operatives and took on jobs that no one else wanted. And now they want Amelia. Amelia had been a part of Apollyon and she gathered intel for the day she would need to exchange the information for her freedom and she was going to tell all of their little secrets if they didn’t stop her.

Pride got Amelia out of the house and they were supposed to get into the van with two masked guys however Pride’s team had shown up and they had killed the guards believing they were helping Pride when they really weren’t. He still had to hand over Amelia for his friends and family. So he asked his team to trust him. He said that he got this and they had to believe in that. They let him get away with Amelia and then Apollyon demanded that Amelia give them the information they wanted, only she refused and so they had to punish her. They showed her that three of their hostages were her family members and they killed her brother-in-law. They said they would kill her sister and niece next. And so Amelia agreed to get them what they wanted.

Pride had seen this exchange and so he saw for himself that Amelia was in the exact same position as he was. They were both forced to do Apollyon’s bidding and so he thought Amelia would take him to where she hid the information yet she had tricked him. Pride followed her to the cemetery and dug through a wall as she wanted. Only the files weren’t in there. Amelia had wanted the team that was following them to think that they got it and walk right into the trap. The guards showed up demanding the information and they had been shot and killed by both Amelia and Pride. Pride hadn’t known what Amelia was going to do and he genuinely thought she had ruined all chances of them finding their loved ones.

Thankfully, his team had been dependable like always. They had gotten the information that Pride wanted and they helped them get to the site. They said they were a few minutes behind and so Pride could have waited for them but he didn’t want to with his loved ones inside. He chose to enter the building with Amelia and together they freed Cassius and Wade. Pride then looked behind him and saw that Amelia disappeared. She might have gone to save her family and so Pride told Cassius and Wade how to leave the building – when he went after Amelia. Amelia had apparently gotten caught again because the group had a gun trained on her and even with her life in danger she told him to take the shot.

Only Pride wouldn’t do it. He dropped his gun and kicked it over like he had been asked. He was waiting for further instructions when Amelia tried to take on the guard by herself and was knocked out. The guard would have then shot Pride if Cassius hadn’t shown. Cassius said that he wasn’t going to leave his son in danger and so together they followed Patton’s directions to where they believed the Mastermind was hiding. They went into the room and they found it empty. There had just been computers and an angel that no one other than Pride could see. Pride was wondering what was going on when the angel said time was up. Pride thought the angel had been talking about him and she had actually been talking about his father.

Cassius had gotten several times by Amelia who woke up and was on a vengeance mission. It really didn’t matter who stood in her way by that point and so Cassius fell victim and then Pride killed Amelia for Cassius. Cassius later died in his son’s arms and before he left he had seen the angel. Cassius had held the angel’s hand when he died and that at least told Pride that he wasn’t hallucinating.

He had just lost his father and according to the angel his own time was coming up soon!