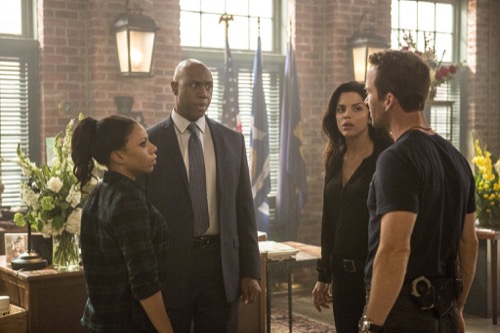 Tonight on CBS NCIS: New Orleans returns with an all-new Tuesday, January 9, 2018, season 4 episode 12 called, “Identity Crisis,” and we have your NCIS: New Orleans recap below. On tonight’s NCIS: New Orleans episode as per the CBS synopsis, “Sebastian receives a plea for help from his high-school friend Adrian Conner after her business partner is killed at the Crescent City Gaming Convention. Also, FBI Special Agent Raymond Isler believes Adrian is a hacker the Cyber Crimes division has been tracking for years”

The team was informed about their latest case over social media on tonight’s all-new episode of NCIS: New Orleans.

A Navy civil servant was found murdered in his hotel room, but videos of the aftermath were posted on social media on long before NCIS actually received a call and that hadn’t even been the oddest thing in regards to this latest case. It turns out someone had posted a message on one of Sebastian conspiracy theory forums and they had tried to warn Sebastian about a murder at the same location. They said that someone was going to die there and Sebastian had dismissed it because he thought it was from another one of those kooks out. And so finding it had been wrong, Sebastian had wanted to fix his mistakes.

The boss had been out of the office and, before he left, he had put everything in LaSalle’s capable hands. But Sebastian managed to sideline LaSalle and so he eventually ran point on the case. He assigned tasks to everyone and had the team check up on a man dressed as a wizard that he thought was suspiciously hanging around at the crime scene. The only thing was the wizard hadn’t been a man. It had been a woman and later on, that same woman had reached out to Sebastian through social media because she had been the inside source. The woman was Adrian Cohen and she had gone to high school with Sebastian.

They were apparently nerds together and, so when she needed help, she reached out to him. Adrian later claimed that she had been developing a gaming app with the victim when he told her that he thought his life was in danger yet Adrian hadn’t been sure if that was really the case and so she had a pseudonym to contact Sebastian. She called herself PluckyDog and had asked him to follow up on the lead because she had been genuinely concerned about her business partner Nate Carr. Carr hadn’t explained why he thought he was in danger and so he had sounded paranoid enough that Adrian hadn’t wanted to sound paranoid either when she reached out to Sebastian.

Adrian had sort of had a thing for him and he had had a thing for her though nothing had ever happened because Sebastian had thought she was way out of his league to even ask her out. But finding out the inside source had been Adrian, Sebastian had quickly agreed to help her and so there was only one problem with that. Sebastian couldn’t help someone that was wanted by the FBI. The FBI has been tracking a known computer hacker that goes by the name the Jackal and they thought Adrian was their hacker. The hacker’s online signature had led right back to her and so Isler wanted to arrest Adrian.

He knew that bringing her or the person he believed was the Jackal in would be a major a victory for him at the FBI because the hacker had surprisingly managed to hack into it most of the federal agencies. Except Sebastian was sure Adrian wasn’t the Jackal. He went to bat for her with his own team and a returning Pride had sided with him. He had asked Isler for some time to investigate things on their end because they still find out who murdered Carr. Carr had only been working on an app and so it didn’t seem like something someone would kill him over, but Isler had ended up agreeing to a partial trade-off.

Isler was going to stay behind at NCIS to help Patton cut some corners as he searched for the real Jackal and in the meantime, Sebastian was going to go with Adrian to FBI headquarters. But a problem cropped up along the way. The convo that Adrian and Sebastian were traveling with had gotten hit. The real Jackal had shown up to murdered Adrian and fortunately Sebastian managed to get her away in time, however, he and his people still had their questions. They knew now that the Jackal had tried to frame Adrian for his crimes and so what they couldn’t understand was why he changed his mind about simply framing her.

If the Jackal hadn’t revealed himself then Adrian would have gone to jail and no one would have been wiser yet the Jackal suddenly wanted to kill Adrian and so Sebastian took her to a safe place to get some answers. And what he found out was that the app technically was all Adrian. She had invented a gaming app that would allow the user to step away and for the game to continue playing as if they were still on. So Adrian realized that she had created an app that could more or less act as if it was artificially intelligent. And so that helped clear up a few things because Sebastian realized someone like the Jackal could use the app to take over another computer without much hardship.

Therefore, the Jackal wanted both Carr and Adrian dead because he hadn’t wanted anyone to be able to stop him once he got going. So the team was just figuring out what the app could do when they got a call from the FBI. The Jackal had apparently struck again and that time he had wanted twenty million dollars in exchange for handing back control of one of the biggest airports in the country. And so the team was out looking for the jackal when Sebastian realized they could also use Adrian’s software to track him down.

They first had to deal with the hired guns that the Jackal paid off to kill Adrian, but once that had been handled, they used the app to track down the Jackal’s location and finally arrested the notorious hacker.

And while Sebastian did realize he was the bigger nerd in high school, he still asked out Adrian figuring it was better late than never and she said “yes”.