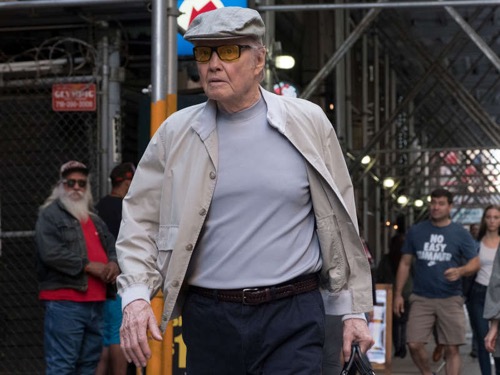 Tonight on Showtime Emmy Award-winning drama Ray Donovan airs with an all-new Sunday, December 9, 2018, episode and we have your Ray Donovan recap down below.  On tonight’s Ray Donovan season 6 episode 7 called,  “The 1-3-2,” as per the Showtime synopsis, “With Ray’s work on Anita’s campaign getting in his way, Mac lays all of his cards on the table; knowing what his friend is facing, Ray must choose where his loyalty lies; Terry and Darryl bring Bunchy home to Boston.”

Tonight’s Ray Donovan season 6 episode 7  is going to be exciting.  So be sure to bookmark this spot and come back from 9 PM – 10 PM ET for our Ray Donovan recap.  While you wait for our recap make sure to head over and check out all our Ray Donovan news, recap, spoilers & more!

Ray is walked through the police station and brought into a cell. Bunchy is drinking and sitting on the ring when Terry comes in. Bunchy says he is going to turn himself in, Terry tells him not to, just stay there with him.

Ray is woken up by two officers, one sits on a chair and tells Ray to stop pulling the shit in the Mayor’s race, help them fix what he broke. Ray says he has no idea what he is talking about. He hits Ray with a stun gun, then asks if it refreshes his memory, but Ray doesn’t give in.

Mickey is at the train station, he wants to buy a one-way ticket to Buffalo.

Bunch asks Terry if he thinks Maria will forgive him, he says yes. Terry suggests they go to Boston.

Mac goes to see Ray and starts shouting at him that he told him to get out of town. Ray asks why he is there. Mac says that he has to work with them, rat everything out or else, well, think of his kids. Ray won’t have anything to do with it, Mac says that he is trying to save his life.

Mac is convinced that Ray can win the election for them and tells Rad, and if he doesn’t, he will take him out. If Ray delivers, Mac wants a seat at the table with Ferrati.

Daryll and Bunchy get into an argument, Bunchy tells him it’s his fault about Maria because he didn’t throw the gun in the river. Terry tells them both to smarten up, they are all heading to Boston together.

Mac got Ray out of prison, tells him that he vouched for him, put himself on the line. Ray asks what he told them, Mac told them that Ray will miss Novak’s campaign. Ray gets out of the police car and goes into his own, Mac says he doesn’t have a choice, Ray drives off.

Ray calls Lena and tells her that he needs her to bring him a gun.

Mickey gets himself a disguise.

Lena meets Ray and gives him the gun but wants to know what is going on. He explains that he was arrested the night before, they know everything, they work for Ferrati, he is going to get Bridget. Lena offers to go get her, they don’t know what she looks like.

Ray gets a call from someone saying they need to talk to him about his friend Mac.

Lena blows up a car to cause a distraction, so the two officers outside of Bridget’s place leave. Lena tells her to text her boyfriend and tell him not to return, she also wants her to get dressed and leave with her, Bridget is not happy.

Mickey ends up at Bridget’s apartment, her boyfriend is there and answers the door while he is on the phone with her. Mickey takes the phone and says that he loves her. Bridget tells her boyfriend to leave the apartment and go to a cafe.

Ray meets Mac and asks him how long he has been wearing a wire. Ray tells him about a guy who he wants him to take down for possession. Mac tells him that he didn’t want to put him in a position, he just didn’t know what to do.

Bunchy, Terry and Daryl are at the graveyard, Terry tells Daryl that Bunchy wants to turn himself in. Terry and Bunchy are in front of their mother’s grave, Terry tells him that she did the best she could.

Ray calls Justine over, introduces her to the executive producer of Nighty Nation, who then leaves the room. Ray tells Justine that she is going to be the lead guest on the show, he wants her to say that she was hired to stage the central park attack, tell them it was fake. Justine asks him why she would do that, he says her brother was arrested and he can get him out.

Novak sees the newscast and Justine says that she got $50 thousand dollars to stage the rape.

Rad meets Mac in a bar and tells him he did good but Ferrati says it is not enough. Rad says Ray has to incriminate Winslow and its not a request, its an order.

Terry, Bunchy, and Daryll get into a fight in a bar when some guy starts to make racists remarks at Daryll.

Mickey sees himself on the front page of a newspaper, he is sitting at a train station and notices that the guy across from him is looking at him strangely so he runs off. Micky walks bumps into a police officer and almost doesn’t get away.

Ray arrives home and Lena is there. She tells him that Justine called her and wants to know if it was worth it. Bridget asks Ray if she can go home, he says yes. Bridget asks how far does she have to go to get away from all this, Ray doesn’t have an answer for her, he just says he is sorry.

Bunchy goes to church and gets down on his knees. He breaks down and cries about what happened to him as a child. Terry walks in, he is beside Bunchy and just rests his hand on his shoulder and then walks out. Outside the church, Bunchy still wants to turn himself in. Bunchy sees a woman get in a car and drive off, he starts to run after the car.

Ray is drunk, there is a guy sitting across him, Ray gets up and asks who he is, the guy hits Ray in the face.