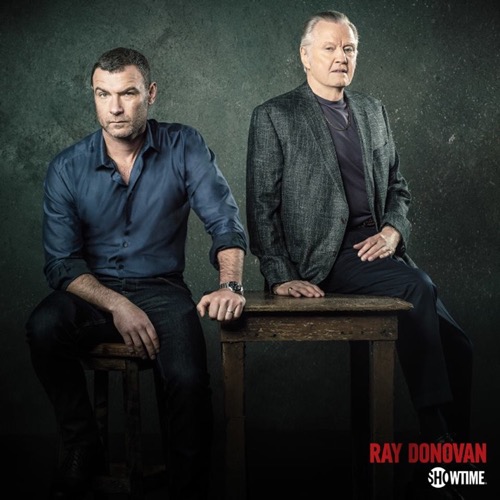 Tonight on Showtime Emmy Award-winning drama Ray Donovan airs with an all-new Sunday, December 23, 2018, episode and we have your Ray Donovan recap down below.  On tonight’s Ray Donovan season 6 episode 9 called,  “Dream On,” as per the Showtime synopsis, “Ray makes a move to save both Novak’s campaign and Mac’s life.”

Tonight’s Ray Donovan season 6 episode 9 is going to be exciting.  So be sure to bookmark this spot and come back from 9 PM – 10 PM ET for our Ray Donovan recap.  While you wait for our recap make sure to head over and check out all our Ray Donovan news, recap, spoilers & more!

Ray Donovan begins with Ray (Liev Schreiber) jumping off the bridge after Abby, in his dream. He wakes up in a psychiatric facility and his restraints gently removed. Ray is being held under supervision for 72 hours; he says nothing out of the ordinary happened besides not eating. He admits he was in therapy last year, but it was court ordered. The psychiatrist (Alan Alda) gives him a sandwich and learns that Abby died. He admits his wife died too, but wants to know if Ray can tell him about the night before.

Ray says it feels like sometimes he can’t breathe and it is like he is drowning; when the doctor presses, Ray wants to make a phone call but is told it can only be to a family. Later, Ray sits in the lounge when a man sits beside him asking if he has seen his twin – a twin he hasn’t seen since he has been there. Several of the patients are called out to visitors; Ray is told he only has 20 minutes with Bridget (Kerris Dorsey). He swears he is okay, he simply got dizzy and passed out. He wants Bridget to contact Sean “Mac” McGrath (Domenick Lombardozzi) for help, admitting he is in a tight spot and she talks Mac’s number.

Bridget calls Mac, who wants to know if Ray was arrested or was it a 5150. He assures her that she did the right thing calling him and quickly called Barry, saying he needs his friend out of Grandview, like yesterday.

Danny Bianchi (Chris Tardio) meets with Sgt Mikey “Rad” Radulovic (Tony Curran); both feel they need to be done for now because if there is a rat, he is going to find out who it is. He leaves. Bridget calls Lena (Katherine Moennig) saying Ray has a panic attack and is inside Grandview but they won’t let him out. Bridget remains at the hospital, waiting for Lena to come.

Daryll (Pooch Hall) shouts for Sandy (Sandy Martin) to get him a towel after his shower; he sees all the recording equipment she has. Mickey (Jon Voight) comes downstairs, calling Terry (Eddie Marsan), who is laying in his bed with uncontrollable shakes. Sandy listens as Daryll sings his song; Bunchy (Dash Mihok) rolls his eyes as Mickey wants to know Ray’s address in the city as he needs to have a serious conversation with him.

Ray stares out the window until his doctor returns with his belongings saying he has been released; he admits it doesn’t matter who made the call to release him. The Psych feels he shouldn’t leave again as he could use a real break from everything; reminding him that him blacking out and assaulting an officer is not the definition of “fine”. He suggests he calls him next time.

Mickey comes to see Terry, learning he is back to fighting in bare-knuckle fighting. He is impressed with the amount of money the fight can bring, but he is only there to see Ray; he insists he is there only to mend fences. Terry tells him he isn’t calling Ray for him and he can get the f**k out of his place. Mickey leaves, calling Daryll about the fight and the money.

Meanwhile, Lena goes to see Bridget about to tell her stuff she didn’t know, but Ray walks out. Lena demands he tells his daughter why he was in Staten Island two months prior; when he doesn’t say anything Lena reveals he jumped off the bridge to kill himself and the person she called is the cop that saved his life. Bridget is upset, saying that all he had left was her and Conor, suggesting he is sick and needs to get help. Ray says he needs to go see someone.

Mac follows Ray out of the hospital, saying there are too many people are in the inside and it’s going to lead to him and Ray. Ray tells him to go home and he will take care of the situation.

Bunchy and Mickey come to see Terry. Bunchy says Terry looks like hell and f**k’d up. He knows if he gets into a fight like that he will get his ass kicked; Bunchy wants to take his place. Ray arrives at Astoria Bowl, revealing he is there to see the Mayor; whom he is sure he will want to hear what he has to say. Inside, after Ray is frisked and then brought to see Ed (Zach Grenier); where Ray says he has an IA problem and isn’t working for Sam Winslow (Susan Sarandon). Ray tells him if he helps his brother, he will fix his IA problem, at whatever cost. Ray makes a call to meet the IA agent.

Bridget cancels her trip with Smitty (Graham Rogers), explaining that the night of Smitty’s surgery, Ray tries to kill himself by jumping off the bridge and she feels like she can’t leave him because he needs her. Smitty says Ray is sick but she needs to understand that Ray won’t allow her to help her, so there is no use. She has a bad feeling, but Smitty reminds her they don’t need to be around any of this anymore; leaving and not look back.

Ray meets with the Agent Emerson Lake (Max Casella), revealing everything Ed knows. He wants to be wired up, so he can tell Ed the agents name and the informants; he suggests they use another name to keep Mac out of it. The IA agent gives him the name of a Judge Scholl, who has been after Ed for a long time. He tells him that Scholl has gone too deep and that is how he got the information and Ed just might buy it. Emerson reveals more dirty information to Ray as he gives him the wire and where to place it.

The Underground fight is set up as Mickey brings in Bunchy, who isn’t so sure of his abilities but Big Easy reveals Bunchy is fighting Thomas; just as the fight begins, Terry tells him that when he is in doubt, he needs to take a dive. Terry smiles as Bunchy beats the crap out of Thomas, the biggest fighter in the room.

Ray goes to see his guy, asking him to make a copy of the wire and he is about to adjust the frequency. Once that is done, Ray calls his psychiatrist but hangs up before he can say anything. Ray enters Astoria Bowl and learns that Bunchy’s charges can be dropped but he doesn’t care what they do to Mickey. Outside, both Emerson and hear as Ray tells Ed the story about Scholl; he says the only way they are done is if Ray kills the Judge and makes him disappear. Ray calls, telling someone to stay home and he will be there soon.

Mickey and Terry talk to Bunchy about the next fight. Daryll is frustrated that they lost everything they recorded but Sandy tells him it was shit anyways. She puts on Aerosmith’s “Dream On” plays as Bunchy fights a beast in the ring. Ray is stuck in traffic as Bunchy just smiles while he is beating repeatedly, over and over in the ring. Mickey walks away in utter disappointment. Rad drives past the traffic with his sirens on, Ray spots a dead body. Mickey locks the guy who runs the underground club in a closet as Terry helps Bunchy home.

Ray arrives at Mac’s where he shouts at Ray that he trusted him and Rad punches him out, accusing him about wearing the wire. Ray gets beaten badly by a baton.