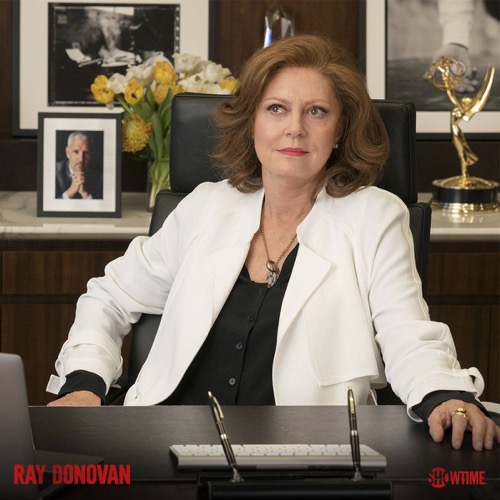 Tonight on Showtime Emmy Award-winning drama Ray Donovan airs with an all-new Sunday, December 30, 2018, episode and we have your Ray Donovan recap down below.  On tonight’s Ray Donovan season 6 episode 10 called,  “Baby,” as per the Showtime synopsis, “The Staten Island cops take a drastic measure that sends Ray on a warpath.”

Tonight’s Ray Donovan season 6 episode 10 is going to be exciting.  So be sure to bookmark this spot and come back from 9 PM – 10 PM ET for our Ray Donovan recap.  While you wait for our recap make sure to head over and check out all our Ray Donovan news, recap, spoilers & more!

Ray Donovan begins tonight with Ray (Liev Schreiber) jumping out of a second story window and running away; badly beaten and being shot at. Sam (Susan Sarandon) is confronted on not coming through for the board, but she assures them that they have her word. Ray walks into a diner, takes a jar of sugar and goes to the restroom. He slowly removes the piece of glass in his chest and covers it with sugar. He calls Sam, telling her to meet him at the diner as he has something she wants, sticking a thumb drive into his pocket.

Bridget (Kerris Dorsey) is busy packing up the apartment when Smitty (Graham Rogers) walks in, informing her that they have a car. She demands to know how he paid for it as he tells her that he gave a guy named Bobby a bunch of cocaine. Bridget calls him a terrible person when he reveals that he still has more; but she loves him anyway.

Sam sits with Ray, he slips her the drive asking her to tell Ed (Zach Grenier) that he is going to kill a judge. He walks away when Sam asks if he is going to be okay. Bunchy (Dash Mihok) asks Terry (Eddie Marsan) for a thousand bucks. Terry suggests that Bunchy should just give Ray the “Old Man” Mickey (Jon Voight). He talks about suicide or possibly how he would start over in a place like Croatia. Terry is shaking really bad as both brothers said they would do a lot of things differently; but turns Bunchy down about going with him as he’d only slow him down. Terry lectures him about never talking about killing himself again; reassuring him that everything will be okay.

Bridget comes out of the apartment with a box and shoves it into the back of the car. She grabs her phone and begins texting. Ray gets in the elevator, staggering into his place. He throws the keys down and is about to pour a drink when Mickey comes out, pointing a gun at him wanting to know why he always turns on him and orders Ray to give him the money. Ray collapses on the floor.

Smitty comes outside, finds the car open and Bridget’s phone on the floor. He looks panicked. Ray wakes up to Mickey drinking. He wants to know why Ray would want to have him locked up again. Ray tells his dad that he gave the money back; Mickey lowers his gun, sits down and sighs. Ray has the nerve to ask his dad for a drink as well. Mickey talks about being locked away for over 20 years, with no comforts of any kind.

Ray apologizes but says he doesn’t have any money for him. Mickey says he knows about Ray having friends in high places, but their conversation ends when Smitty tells him Bridget is gone and he thinks something is wrong. Ray gets dressed but Mickey warns him he needs to take it easy as he isn’t 100%. His phone rings again and it is Mac (Domenick Lombardozzi), saying he had no other choice but reveal everything. Ray tells him to let his daughter go, but Mac says as long as the recording isn’t released; Bridget can come home after the election. Ray tells Mickey that the cops took Bridget, he has no idea where they have taken her and Mick leaves with Ray.

Rad (Tony Curran) brings Bridget out of the squad car, but when she screams he punches her in the stomach. Rad tells Mac to keep her quiet and not even talk to her, even though she acknowledged that he was her dad’s friend. Mac tells her to stay calm, as this will all be over soon. She begins to cry.

Ray tells Mick to stay in the car while he goes to Sam, asking for the recording back as they have Bridget. Ray wants the drive back and she says she won’t release it when he says they will kill Bridget if she does. Once Ray leaves, Sam makes a call, wanting numbers.

Ray returns to his car and calls Mac, saying he has the drive. Mac says they don’t want that, everything needs to remain quiet for a couple days and then they can talk. Ray learns its not up to him and Mac hangs up. Mick tells Ray to stop and think, as he knows what this is. Ray calls Daryll (Pooch Hall), telling him to get Smitty and meet him on Staten Island; he refuses until he learns Bridget is in trouble.

Mac removes Bridget’s gag, suggesting they watch TV and try to relax. He turns on Dirty Dancing and sits in the chair. Bridget wants to know why he is doing this but Mac tells her the same thing, that it isn’t up to him and they will kill him. She says Ray can help him, but he assures her that Ray won’t help him now. He apologizes as he looks for some alcohol. Mac says he doesn’t care about himself, he has a kid and a wife and if he doesn’t play this right; they will find them. Ray needs to keep his mouth shut.

Bridget begins to scream when Mac says they can’t speak any more when she questions what happens if here dad doesn’t do what they say. Mac punches her in the face and then offers her some gin, which she refuses. Terry watches from the corner as Bunchy is taken away by the FBI in handcuffs. Mac asks her again if she wants a drink, but she only wants him to turn the movie off as she used to watch it with her mom, who has died; Mac puts her gag back on.

Sam learns that her candidate Anita Novak (Lola Glaudini) has a chance, calling it a miracle. Sam calls for Melinda to come to see her. Ray finds Daryll and Smitty, ordering them to get into the car. Ray tells them they are going to wait at the bar. Sam plays the recording for Melinda, who says she needs this out right away and wants a copy within three hours, tossing the recording to Melinda; even though Ray won’t reveal it’s his voice on it.

Smitty, Mickey and Daryll go to the bar when Ray receives a call from Terry, who informs him that the Feds got Bunchy. Terry is upset that Bunchy’s life is ruined and talks about a memory they had with Bunchy and how he took the blame for the car ride and how Mick hit him. Ray apologizes for everything but doesn’t reveal what is going on to Terry.

Inside the bar, Smitty wants to be out looking for Bridget; but Daryll tells him to relax and trust Ray as he would kill everyone in NYC to save Bridget. Sam calls Ray, saying she had to release the recording to her source at the Tribune. She hangs up, saying it is already done. Sure enough, Danny (Chris Tardio) walks into the bar and Daryll gives Mickey the signal.

Mac talks about how his wife loves Dirty Dancing too. He offers his condolences about her mom, and what her death is what makes him think. He begins to apologize to his own wife. Mickey tries to strike up a conversation with Danny who tells Lou to buy him a drink. Mickey toasts to Danny but then begins to beat him. Daryll and Smitty jump in as Mick grabs a gun and they take Danny with them.

Anita is on the phone when Sam arrives at her campaign office. Together they listen to the recording, Anita thinks Ed is insane trying to order a hit on a judge. Sam is there to discuss that when she comes to win the Mayoral election, she will remember who put her there. Anita will win the election but Sam will be the Mayor and Anita will answer to her.

Mac continues talking about how he has screwed up his entire life; wondering how it got so bad. He can’t remember the last time he felt good. He passes out from the drinking.

Mickey continues to beat Danny, demanding to know where Bridget is. Ray gets out of the car and demands Danny give them an answer or his father will kill him and Ray will go kill everyone he knows and has put his hands on. Mickey cocks his gun when Danny finally gives them an address. Smitty and Daryll throw Danny in the trunk and Smitty go to Sandy’s; Mick and Daryll go with Ray.

Big Al (Gerard Cordero) calls Mac, saying Ray took Danny; telling him to remain calm as they will handle it when he gets there. Smitty drives with Danny in the trunk, but it is clear he is having doubts. Daryll, Ray, and Mick drive in silence, arriving at the address Danny gave them. All three approach the house with their guns out, Ray enters through the kitchen as Daryll goes upstairs. Big Al sneaks up behind Ray and Mickey shoots him in the head. He exchanges look with Ray who walks into the basement.

The room is empty, but he finds Bridget’s necklace on the ground. Dirty Dancing is playing the scene where “Baby” is apologizing for letting her father down and Ray looks devastated.