The Young and the Restless Spoilers: Adam Newman Rides Dark Horse – Victor Trampled By Both Sons? 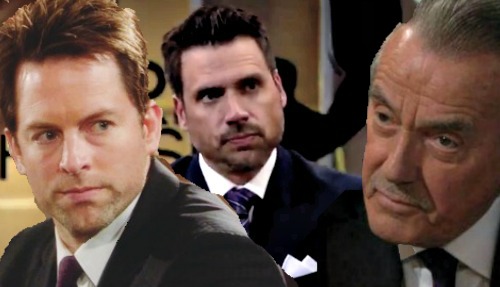 The Young and the Restless spoilers tease that Adam Newman (as most recently played by Justin Hartley) will help Nick (Joshua Morrow) to bring down Victor (Eric Braeden), eventually. The fuse has already been lit which will spur Adam’s return, that being Victor’s custody snatch attempt of Christian (Jude and Ozzy McGuigen).

Michael Muhney recently offered cryptic comments via social media that appeared to offer hope to Y&R fans who have been longing for him to return to the Adam role. The possibility of this repairing exists based on the show having interviewed him for rehire in the summer of 2014, months after non-renewing his contract.

This actor was, is, and will remain eligible to be hired. Any comments by doubters purely reflect opinions that aren’t fact. So, Muhney’s return to Y&R, or non-return won’t serve to have proven this scribe, oppositional detractors, or everyone up through and including Genoa City’s mascot, a goose, right, wrong, or indifferent.

Pet goose? Yes, that point was invented. The difference with that purposeful joke and the rumors started about Muhney is that the sources of the rumors did so without intending humor and have never apparently admitted their moral crime.

Now, shrug off the above and read this tale of the future. Projections are offered because no one other than TPTB at Y&R know (generally) what Nick’s fate will be, as they’ve had the writing staff story-boarding it.

Nick has thus far recruited Noah (Robert Adamson) to head the London division, as this character is off-camera. Abby (Melissa Ordway) is also on-board and will be leading the company’s public relations and marketing efforts.

Jack (Peter Bergman) might not be an Abbott, or maybe he is. Regardless, he’s serving as a senior consultant. Jack’s name plate will probably be finalized, like his paternity storyline, by the fall (at the latest).

The coming addition of Adam will not only rock this fictional world, it will incorporate the second most ruthless businessman that Victor has ever known, after himself, into Dark Horse. Who better to help foster the killer instinct within this new Newman family company than a man who’s twice been thought killed?

Oh, it’s not that Victor will go down without a fight. He’ll bob and weave, yell and scream, likely even land some punches.

But when all is said and done, Nick’s brilliantly gutsy idea, to do to Victor what he did to his own children, to John Abbott (Jerry Douglas), and to countless others through these many years will succeed. The end of Victor’s reign will leave him penniless, disheveled, fully discombobulated, and maybe even bald.

The last word used in the above paragraph was, again, a joke. But that perceived image is hilarious and so it was written. Unlike invented rumors about real people, it’s application to a soap opera character creates laughter among this audience instead of a smear mark on an actor’s career.