The Young and the Restless Spoilers: J.T. and Phillip Mysteries – Y&R Summer Horror Show Revealed For Nikki and Jack 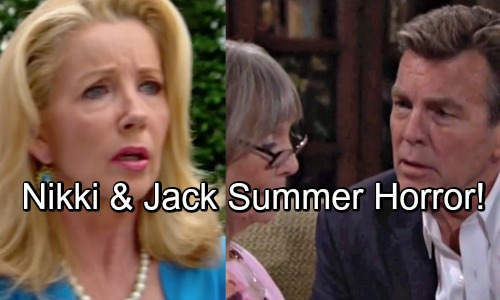 The Young and the Restless spoilers tease that that Phillip’s (Donnelly Rhodes) decayed bones are still lying in the coffin he was placed into under the Chancellor estate grounds in the 1970’s. And J.T. (Thad Luckinbill) remains dead for a month-plus under the center of Chancellor Park, despite four character’s guilty thoughts that he might not be there.

Y&R fans continue to digest the separate storylines that remarkably involve not one, but two grave-digging attempts. What are the odds that sets of separate characters, even on a soap, would be motivated to dig up the deceased within the same time frame? One gruesome adventure would be plenty to watch, but two? Come on.

Upon arriving they discovered that Jill (Jess Walton) paid to cover-over J.T.’s unmarked grave site with a cement circle which now surrounds a piece of modern art positioned in honor of Katherine (Jeanne Cooper). As such, these inquisitive, unsettled minds won’t be able to unearth the answer they were seeking.

It must be said that Nikki’s accidental act was unforced, which then caused J.T.’s apparent death. Her choice and that of the other three ladies present then became the initial crime in not reporting who literally went down.

Meanwhile, Jack’s failed attempt to get a court order to dig up Phillip has spurred Kyle (Michael Mealor) to become a grave-digger himself. This prodigal son also wants to know if his veins are coursing with Chancellor blood.

Kyle’s attempt to see what’s left of his potential grandfather won’t go as planned, but will create July Fourth week fireworks of a different kind. As a result, Jack will still be digging (no, that’s too cheeky for this sentence), uh, attempting to reach the truth, somehow.

The evidence that Jack and Nikki are running with is surely thin in both cases. Phillip might be Jack’s dad because Dina (Marla Adams) said so and a black and white photo shows her standing near him fifty-plus years ago? And, received documents at Newman, along with a blurred photo mean that J.T. is alive?

As this horror movie-type summer bleeds on in Genoa City, Nikki and Jack remain set as characters who are aimlessly searching for answers they think they’ll never find. Of course, savvy soap fans know that both truth’s will likely arrive well before fall. CDL is a leading source for everything linked to The Young and the Restless. Check back regularly for Y&R spoilers and news!