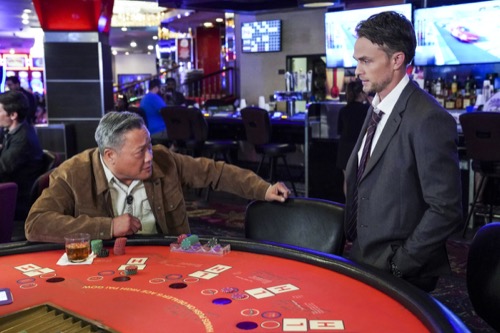 Tonight on CBS their new series All Rise airs with an all-new Monday, November 18, 2019, season 1 episode 8 called, “Maricela and the Desert,” and we have your All Rise recap below. On tonight’s All Rise episode as per the CBS synopsis, “Lola and Emily find themselves on opposing sides when the key witness in a murder trial is the victim’s 11-year-old daughter.

Also, when Mark’s key witness in a case winds up in a Vegas jail, Luke accompanies Mark on a road trip to the desert to bring the witness back to testify.”

Tonight on All Rise, in the trial people vs Flores, a man named Felix is charged with murdering his girlfriend Linda 18 months ago who’s body they haven’t found, leaving their daughter Maricela an orphan. Lopez is Felix’s lawyer who is refusing to allow her to take the stand, during a hearing Felox has an outburst begging Judge Carmichael to let him see Maricela. Judge Carmichael holds a private meeting in her chambers with Maricela to ask her a few questions in regards to the case and if she’s be able to handle taking the stand which the little girl says she can, the judge agrees to allow her to take the stand and Lopez objects.
Judge Carmichael tries to find a more comfortable way for Maricela to testify suggesting she do it in a secluded room on camera but Judge Benner disapproves.

Lopez asks Felix about what happened on the day of the murder, but the only thing he was worried about is speaking to Maricela and he tells Lopez they had an argument that day which upset Lopez because she knows Maricela will say this on the stand.

The day of trial begins and each side questions witnesses but they paint Felix as a violent man towards Linda and the fact that he didn’t report Linda missing for five days. During the questions, Maricela walks in and Felix emotions run wild as he hasn’t seen her in four months and they both run towards each other and they go into recess. Felix’s emotions take over tells Lopez he wants to consider a plea but Lopez is against it refusing to allow him to serve 11 years saying Maricela will go into the system.

Luke is shadowing Callan today to learn some things until he passes the bar. Callan is defending a man named Paul who has a shattered leg from him being thrown off the roof. His star witness is locked up in Vegas do him and Luke head out there on a road to bail him out. Callan tries to bail him out but bail isn’t set and tries to bribe the officer which leads into a verbal altercation.

Luke takes his shot to try to talk to the officer to try to get the witness released and gets him to refer him to a judge who can set bail. Luke and Callan go find Judge Roberts at a casino to hold an emergency bail hearing. They play a game at the blackjack table and Roberts makes a bet that if Callan wins he’ll waive bail, and Callan wins so then drive back.

Lopez learns that Felix doesn’t speak great Spanish and a witness says during one argument she overheard with Felix and Linda she says Felix says a phrase which he doesn’t even know what it means. Lopez asks the detective to look into Linda because she feels she is hiding something.

Judge Carmichael finds a way to modify the courtroom to make Maricela more comfortable by having stuffed toys and blankets in the room where she is testifying from. Maricela testifies saying she did tell the detective that she saw Felix throw a vase at her mom during an argument. Lopez questions Maricela leading the young girl to get emotional and Felix does too Judge Carmichael gets upset and decides to remove Felix from the courtroom and she and Lopez get into an argument about it .

Maricela goes missing, she is later found in a staircase and only agrees to talk to judge Carmichael, the begin to discuss a necklace given to Maricela by her mother and she reassures her that her mother is with her, they go back into the court and Maricela takes the stand. The detective comes into the courtroom and asks for a recess they go back into the Chambers and he tells them that the woman Raquel who testified against Felix earlier lied about the argument because in fact she and Linda were doing drugs and Linda overdosed on her house and she panicked and disposed of her body. The case is dismissed and Maricela reunited with Felix.

Callan witness takes the stand saying during a hazing for a fraternity pledge night saying Paul was pushed off the roof by another frat member named Winston.