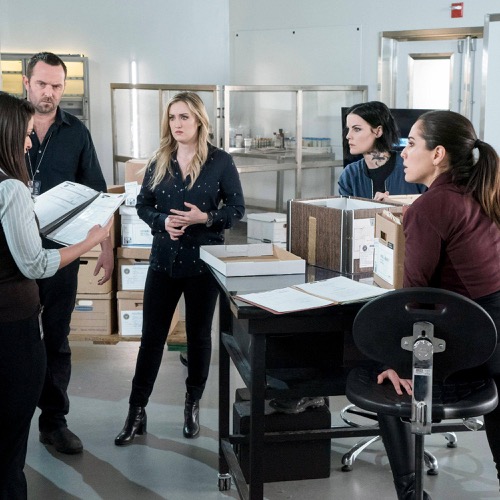 Tonight on NBC Blindspot airs with an all-new Friday, May 24, 2019, episode and we have your Blindspot recap below. On tonight’s Blindspot season 4 episode 20 called, “Coder To Killer,” as per the CBS synopsis “A horrifying and vengeful villain threatens the FBI. Weller considers his priorities. Zapata and Reade try to navigate their living situation. Patterson explores a budding interest.”

An old enemy came to the team with information. Sho was put away after he tried to use an NSA computer virus to kill several members of the team and so no one was willing to trust a former terrorist on mere faith. They wanted proof before they were willing to discuss deals and this meant Sho had to reveal something big. Not just good or any small problem. It had to be big enough to warrant witness protection and so that’s when they got their source to give up the information. He said that right around the time that he got picked up he was working with a terrorist group called Dabbur Zann.  This group had wanted a bunch of missiles and it was taking quite some time to finish this deal, but members of this group ended up getting arrested in the raid on Sho and so he recently heard from his fellow inmates.

Sho told the team that he learned that the Dabbur Zann did get their hands on the missiles. They were also going to be using it in an attack on NYC and this attack was imminent. The team’s source of information said he didn’t know anything after that and of course, no one believed him. It was only natural on their part. So they took Sho to an interrogation room while they continued working. The team investigated this terrorist group that they’ve never heard of before and it wasn’t surprising that they couldn’t find anything. There was nothing that states Dabbur Zann was a real threat and to make things worse the computer system was being overhauled. They needed an update. The Director felt that Patterson’s system was no longer good enough and so he brought in a tech company to handle this update.

These people didn’t know the system and it was taking them forever to complete the job. Blue Annex Technologies was rebooting the computer on Patterson at the last minute and she found herself shut out at the most crucial moment. Unfortunately, the team was a little too quick to dismiss this new terrorist group and it came back to bite them. They were all looking one way and in the meantime, this group had managed to infiltrate their building. Dabbur Zann must have figured out that there was someone leaking information and taking the cover of someone from the Blue Annex Technologies helped them get past security. This assassin killed his way to the security cameras and saw that Sho was in an interrogation room.

The assassin headed to Sho and along the way he continued to harm innocent people. He killed Leonard Perkins from BA Technologies and he knocked out Reade to get Reade’s fingerprints. He needed the fingerprints of a seasoned agent to gain access to Sho. While this was all happening, Patterson and Brianna were trying to pinpoint a possible attack using basic mathematics and Rich was off on one of his tangents. He took a peek at Patterson’s browsing history and found out that she was looking at adoption. Patterson later explained to him that she wasn’t all that sure about it and that she only got the idea after spending a lot of time with Bethany. Little Bethany was visiting Weller and Jane and she really was just adorable. And she even gave Patterson the idea of creating a child-friendly computer game that could get children interested in computers at an earlier age.

In other words, the team was all scattered and considering their own problems without looking at the bigger picture. It wasn’t until much later on when they found out that Sho has been lying to them that they asked themselves why? Why would Sho come to them with misleading information? The team theorized that Sho was probably using this false intel as a diversion and they figured out he planned on escaping federal custody right as their computer systems came back online. They used the new system which was admittedly much faster to determine that Sho got his information from a third party and that was using it to lure out Dabbur Zann. It was Dabbur Zann that was willing to break him out. Not because of what Sho claimed to knew but what he actually knows.

The man sent do this was technically assassin because he killed anyone that got in the way, but Sho was in no danger with him. Sho and his rescuer used Reade as their escape plan. They used his fingerprints to get to the lower levels of the building and then they used his body to throw off the team. By the team came after them, they had already doused Reade in lighter fluid. So they set Reade alight and escaped in the chaos. Neither Sho nor his Dabbur Zann cared what happened next only someone did care enough to throw herself into the fire to get Reade out. Zapata might have revealed she still has a feeling for him with that one act yet she would do it again to save Reade’s life. She also wanted him to go to a hospital and he turned it down because he wanted to catch the people that almost killed him.

Everyone wanted to assist with this manhunt. They knew that Sho was working some angle with Dabbur Zann and so they finally got information on the terrorist group. The leader was identified as   Pavel Makarov. He was the man that infiltrated their building and the fact he came personally meant Sho was important to him, but the team couldn’t figure out the way on this one alone. They had needed Brianna. Brianna was that put the pieces together and she realized that Pavel was working with Sho out of revenge. Sho must have found out who killed Pavel’s family. Pavel was a survivor of a drone attack and while it didn’t kill him it did kill his wife and daughter. It would make sense that he would someone like Sho to gain access to government files. He would want to know who ordered the attack and sadly Sho must have finally passed on the name.

Sho told Pavel that Colonel Sheryl Meeks killed his family. The Colonel has since retired to Upstate New York in order to spend more time with her own family and so the team knew that’s where Pavel would strike. They cut him off on his way to kill the Meeks family and took the shot when they saw it. Pavel was now dead and that left only Sho out there. The team knew that they would have to stay on guard but they didn’t want to let Sho dictate their life. Weller and Jane went back to spending time with Bethany and Rich finished Patterson’s adoption papers for her because he didn’t want to miss out on something she really wanted. And while she was upset with him at first, she came around to the idea.

Reade, on the other hand, canceled drinks with an old college friend that just so happens to be female, but he and Zapata weren’t in a place to reveal their real feelings for each other.

But as the team was celebrating their win, Madeline Burke’s foot soldier got to Brianna and threatened her parents if she didn’t help him.