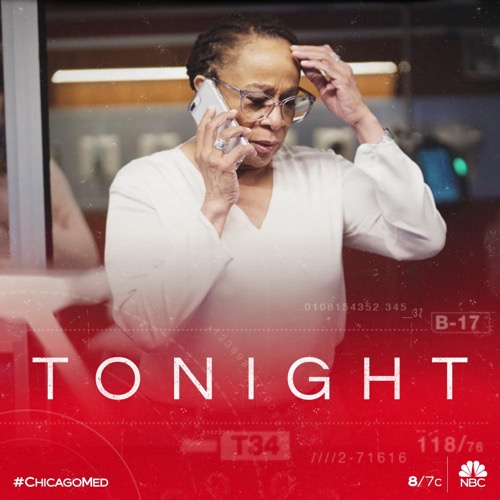 Tonight on NBC their medical drama Chicago Med airs with an all-new Wednesday, April 24, 2019, episode and we have your Chicago Med recap below. On tonight’s Chicago Med season 4 episode 19 called, “Never Let You Go,” as per the NBC synopsis, “The hospital goes into lockdown mode when a man with a gun holds medical staff hostage. Goodwin is forced to make a tough decision. Dr. Rhodes begins to realize his time with his father is getting short.”

There was an issue in the ED and it all stemmed from an issue with a patient. Dr. Manning’s patient was Lily Cooper and she was thirty-eight weeks pregnant, but there had been a car accident and it had started her labor early. It was a little too early for Lily herself because she planned on a c-section. She was giving her baby up and she wanted the c-section because she just wanted to wake up afterward having never seen the baby. She told her doctor all of this and Manning tried to accommodate her. She spoke to the doctor on call in the OB/GYN department and she arranged for the surgery. The doctor was telling Lily the good news when Lily ex-boyfriend suddenly showed and said he wanted to be a family. He was a kid himself and hadn’t reacted well when Lily told him she was pregnant. And so clearly he had a change of a heart.

David said that he wasn’t ready before because he lost his job and his mom was sick, but he’s since found a job that paid twelve dollars an hour and he thought that was enough to support a family. He told Lily that they could be together now and that nothing would get in the way. Except Lily didn’t want that and her father stopped liking David when he first took off. Joseph Cooper tried to get David out of the hospital and he fought him back so security needed to be called. David thought he had a right to be there because it was his baby and so to get him to go Lily said it was too late because she was giving up the baby. The baby’s adoptive mother was even there. The only one that Lily didn’t want around was David and so security escorted him out of the room.

David still didn’t want to leave the hospital and so Sharon Goodwin went to talk to him. He kept saying how it was all Lily’s father’s fault because the older man was making Lily give up the baby and Goodwin was forced to be honest with him. He believed that he was going to be a family with Lily and Lily no longer wanted that. If he had made this decision earlier than maybe she could have been talked around. Now, she wants to finish high school and go to college. She didn’t want to be a teen mom and her dad wanted what was best for her. It was up to Lily if she wanted to keep her baby and she didn’t. She even claimed that she didn’t know who the baby’s father was and that meant David had no rights. He had to let go of her and Goodwin tried to tell him this as best as possible

Goodwin thought she did a good job with getting through to him because he left, but then he came back with a gun. He pulled it when he saw Lily again because he claimed that with it no one would get in his way and all he did was scare Lily. Lily’s father tried to step in to wrestle the gun away and he got shot in the struggle. David then went on to shoot the security guard that tried to intervene and so the other guard was forced to put his gun down. He handed it over and David used his new control to start making demands. He said that he was going to get his girlfriend and his baby out of there. He allowed the doctors to treat critical patients like the guard that was shot and Lily’s dad. And the rest was fair game.

There was a little boy named Joshua who had a fever and his nanny had only stepped away to take a call, but there also Dr. Rhodes who had been treating his father for pneumonia at the time when everything kicked off. His father’s bad heart was ignored for a while and it wasn’t until David was convinced to let go of Lily’s dad that the doctors and nurses in the ER could begin treating other patients. Rhodes was allowed to see to his father then and unfortunately, there wasn’t another doctor that could see to Joshua. His doctor had been Dr. Choi and Choi had tried sneaking up on David. David had handcuffed him and he wouldn’t let the man see to the kid no matter how many times everyone asked. David only cared about his family and it didn’t matter that Lily couldn’t stand the sight of him.

It was just not getting through to David. He was seventeen-year-old high school dropout who still believed that he was going to get away from everything that happened if he could just leave the hospital with Lily and the baby, but she was in labor and as her labor progressed she developed a complication. She had a ruptured uterus and both the life of the mother as well as the child was at risk. Both of them needed hybrid OR and Rhodes. Rhodes refused to leave his father unless the man was transferred out like Joseph Cooper and only then did he see to Lily. If Lily or the baby died,  David said he was going to start killing doctors and so Rhodes worked with Halstead, Manning, and Maggie to try and keep both alive. They eventually got the baby out without a problem and then they saw to treating to Lily.

Lily had several bleeds and it had been touch and go for a while before Rhodes was finally able to staunch the most serious bleeding, but even then David talked about just taking his family and going. David went in once they stitched Lily up and he told her the “plan”. But she turned him down. Lily wasn’t going with him and so he told her that if she changed her mind about joining him and their son that she could contact his mother. He was about to pick up his son when he noticed that Goodwin picked him and that she was slowly backing away from him. David tried to follow and he unknowingly went into the kill shot that Goodwin had set up with the police. The police took the shot when they saw it and he suffered a killing blow to the neck. David never got to hold his son and he died thinking the adoption would still go ahead.

There was just one problem with that. The adoptive mother ran out of there the first second she could and she wasn’t coming back. This meant the baby was still in the hospital and so Lily ended up changing her mind about holding him. She picked him up and from that moment she didn’t want to let him go. Lily told her dad that she wanted to keep her baby and he seems to have accepted it. The other patients that had gotten trapped in ED were also recovering. Rhodes found out Bekker did his father’s surgery and despite his fears, she hadn’t killed his dad. The little boy still got treatment in time thanks to Choi talking April through the procedure and everyone was alright. Manning even found Halstead afterward to thank him for staying because she knew he had only done it for her and that he could have gotten out if he wanted to.

She also ran into his new girlfriend and that had been awkward enough.

The only person that remembered what happened to David and knew that it didn’t have to end the way had been Goodwin because she regretted bringing him to the kill shot.