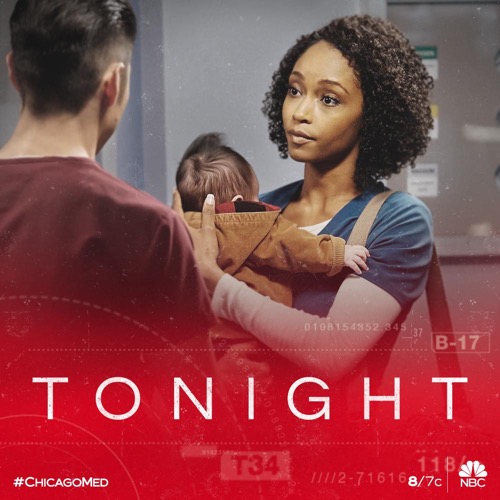 Tonight on NBC their medical drama Chicago Med airs with an all-new Wednesday, May 15, 2019, episode and we have your Chicago Med recap below. On tonight’s Chicago Med season 4 episode 21 called, “Forever Hold Your Peace,” as per the NBC synopsis, “Caroline has news to share, forcing Dr. Charles to make a serious decision about their relationship. Maggie meets her sister’s new boyfriend but discovers danger may lie ahead. Dr. Rhodes experiences a devastating loss while Dr. Choi and April are faced with an unexpected challenge that strengthens their relationship.”

Sometimes life is unfair. Emily got pregnant easily and she thought she would live out her pregnancy in a fairytale with her married boyfriend Bernie. Bernie’s wife left him when she found out about the pregnancy and Bernie told Emily that they would make a life together out of Chicago, but things changed a few months ago and now Emily is back with her son Vincent. She said that she was still with Bernie and that things were just complicated. Which was an understatement on her part? Emily came back because Bernie told her that he had to finish things with his ex-wife and somehow that meant living with her and their daughter again. Bernie was over there most of the time and he left Vincent to Emily. And she became overwhelmed like most first-time mothers that have to do this on their own.

Emily continued to delude herself that Bernie was coming back and so she moved into April’s place on a temporary basis. She told April over and over that it was just temporary until she got Bernie back, but its been weeks since this conversation and April more or less became the second parent. April was helping with the diapers and the feedings. She was late to work on most days because she was so busy helping Emily. Emily would say she was tired and then she said it would be different once she talks to Bernie. She told April that she has this and she doesn’t. Emily has no fallback plan and her reliance on April was risking April’s livelihood. The one person that saw this and tried to say something was Choi.

Choi was Emily’s brother and he knew that his sister’s reliance on April was just another her of taking advantage. Emily did this when she was an addict and she doing this now that she’s mother. She couldn’t handle it. Emily thought that Bernie would come back and with each passing day, the truth is outing itself. Bernie was not coming back. Emily might have guessed as much from his absence and so it was very telling when she stopped being in communication with April. April was watching Vincent and she had to go talk to work. She took him with her and Choi asked what happened to his sister. April didn’t know and she tried to calm down Choi by saying that last night was particularly hard on Emily, but he had enough by then.

Choi took over with baby Vincent and he tried to get into contact with his sister, but he couldn’t reach the mother and so that was just another of life’s unfair moments. Emily could pick up and start again at motherhood whenever she likes while others like Manning’s patient Desiree struggle. Desi, as she likes to be called, was early in her pregnancy. She was also going through Stage 4 ovarian cancer and the cancer was spreading. It spread to her brain and she developed a brain tumor. It was advised that she abort this pregnancy to begin chemotherapy and she refused. Desi has already named her son Elijah and she didn’t want to give him up. Only she’ll die if she denies treatment and so her husband may have to make the call.

Desi signed over power of attorney. She knew that it would get worse towards the end and so she left it to her husband to see out her wishes. Desi didn’t want any medical intervention that could be a threat to her unborn child and she wasn’t going to treat the tumor or the seizures it caused, but the doctors went to her husband and they told him the truth. They said that Desi might die before she could even deliver the child and so they told the husband that she could become a human incubator. She was going to slip into a coma and never wake up. Her body would be put on a ventilator and she would remain in a vegetative state until the fetus became viable. And so the husband could have gone against her wishes.

He talked to Charles about it and Charles had to bring in his own personal experience. The doctor was in love with his ex-wife and Cece wanted to leave Chicago. She talked to her doctors to switch her treatment over to someone closer to her own apartment as well as her job. Charles had tried to stop her by getting her a job in Chicago, but that isn’t what she wants. Cece wants to go and Charles has to let her go. He said that sometimes it isn’t about what he or Desi’s husband feels about the matter because they both knew that she wants something different. Desi wants to give birth to Elijah and so her husband realizes he couldn’t push her. He couldn’t get her to see another way and that’s part of the reason they fell in love to begin with. And to use his power of attorney to act against her wants would be a violation and so he receded his permission for surgery.

It was the right thing to do. It also wasn’t easy, but he made that choice based on his love for his wife and that’s even why Maggie did what she did. Maggie finally grew close to her sister Denise and it had practically been a miracle because they’ve been estranged so long. Maggie wanted to just love and her sister for who she is and she tried. She just was never going to allow her sister boyfriend to beat her. Maggie went against her sister’s wishes and confronted the boyfriend with Halstead’s help. Together they scared the boyfriend away. Trevor knew if he ever contacted Denise again that the police were going to be brought in and so he wiped his hands clean. He said he was glad to be rid of that freak and that was so hurtful that Maggie didn’t bother to mention it to Denise.

She let her sister lay all the blame on her and she took it because she didn’t want to hurt Denise more than she had to, but who knows if that lie truly helped. Rhodes has been telling himself this whole time that he had the most caring mother in the world and that she killed herself because of his father. Only his mother was barely involved in his life. She always depressed and so Rhodes sort of created this lie to make himself feel better. And it worked for a while because his father just took it. Then as the man was sick he began trying to tell his son the truth and at first Rhodes refused to believe him. He didn’t start remembering what actually happened until he went through the photos books and never saw his mother. She wasn’t there and his dad.

Rhodes tried to make it up to his dad, but by the time he returned to the hospital, his father was going through cardiac arrest and sadly the man passed away. He died before he and his son could ever make things right. But Charles didn’t want to let an opportunity pass him by and so he told Cece how he felt. He explained to her that’s why he was trying to get her to move and all it did was make her sad. Cece didn’t really miss her old job. She wanted to leave town because her trial wasn’t working and she was dying. She didn’t want Charles or their daughter Robin to see her like that and so she tried to leave town. And now that Charles knows, he’s never going to abandon her again

Oh, Emily came back. She said that Bernie was in the hospital and that had freaked her out, but she’s back now and she changed her mind about running away. Emily thought that would be it and it wasn’t. Her brother and April got back together as they thought they were going to be raising Vincent and now they the two of them were demanding that Emily provide consistency for her child or they weren’t going to let her be a part of her son’s life.