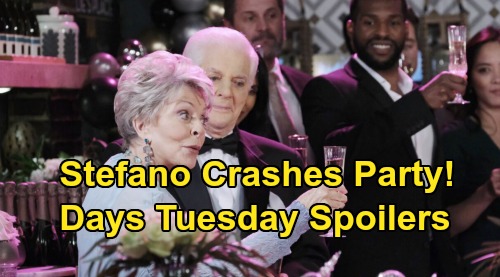 Days of Our Lives (DOOL) spoilers for Tuesday, December 31, tease that Eli Grant (Lamon Archey) will get some startling news. After reviewing the security footage, Eli will catch a glimpse of the vandalism culprit and receive quite a shock. Whether Eli can see Lani Price’s (Sal Stowers) face or not, he’ll surely see her nun’s habit and assume it’s his ex.

Naturally, Eli will wonder why Lani was battling enough rage to strike this blow. It was a targeted attack on Gabi, so Eli won’t understand what Lani was so upset about. He may suspect this was about jealousy, but there’s far more to the story. Eli has no idea that Gabi rigged Julie Williams’ (Susan Seaforth Hayes) pacemaker and threatened to kill her if Lani didn’t cooperate.

Eli will ponder this shocking development, but he’ll also make time to celebrate New Year’s Eve with Gabi. A big bash will get underway at Julie’s Place, so many Salemites will mix and mingle. Days of Our Lives spoilers say John Black (Drake Hogestyn) and Marlena Evans (Deidre Hall) will be on hand to ring in the new year.

Justin Kiriakis (Wally Kurth) and Kayla Brady (Mary Beth Evans) will also be around for this festive gathering. The gang will soon find themselves mulling over an intriguing mystery.

Days spoilers say that secretive Santa Claus will still be on Kayla’s mind. Justin, John and Marlena will toss around some possibilities with Kayla on Tuesday. They’ll try to figure out who might’ve dressed up as Santa and joined the Christmas party at the hospital.

Kayla may insist she was so certain it was Steve Johnson (Stephen Nichols) after she saw him. She’ll wish she’d had a chance to stick around and pry some answers out of Santa, but an answer’s about to walk through the door!

DOOL fans can expect “Steve” aka Stefano DiMera to crash the New Year’s Eve shindig. After taking advice from Princess Gina Von Amberg aka Hope Brady (Kristian Alfonso), “Steve” will put on an eye patch and make his debut.

Stefano isn’t ready to reveal his true self just yet, but he’s sick of being in limbo. Coming forward as “Steve” now is his best solution, so that’s exactly what he’s going to do.

Days of Our Lives spoilers point to a surprising duo showing up at this party, so that could be “Hope” and “Steve.” They might spin some story about how “Hope” ran into “Steve” and brought him over. Of course, Kristen DiMera (Stacy Haiduk) will make an appearance at this gathering, too. You can always count on Kristen to stir up plenty of trouble!

Kristen will dwell on Nicole Walker (Arianne Zucker) and Brady Black’s (Eric Martsolf) bond all evening. She’ll fume over how close they seem, but their next kiss will really rile Kristen up. It’ll lead to Kristen and Nicole’s catfight later this week, so don’t miss all the hot drama.

We’ll give you updates as other Days details emerge. Stay tuned to DOOL and don’t forget to check CDL often for the latest Days of Our Lives spoilers, updates and news.