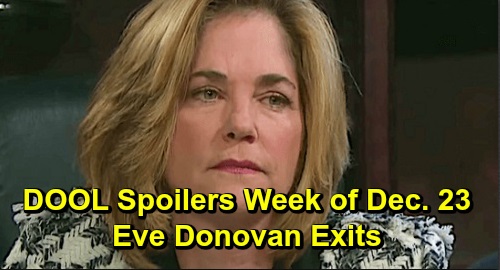 Days of Our Lives (DOOL) spoilers for the week of December 23-27 tease that some holiday shockers are looming. For starters, Christmas Eve will bring good news for Eve Donovan (Kassie DePaiva) and Hattie Adams (Deidre Hall). They’ll both be released from prison, so it’ll be time for them to part ways. It looks like Hattie will make Salem her home again, but Eve will have other plans for the future.

Eve will decide to leave town and get a fresh start somewhere else. Before she goes, Eve will stop by to see Abigail DiMera (Kate Mansi). She’ll offer her sincere gratitude to Abby for working hard to clear her name, so they’ll share some nice moments.

While Rafe seeks answers, Stefano DiMera aka Steve Johnson (Stephen Nichols) will consider revealing himself to Marlena Evans (Deidre Hall). He’ll be hiding in Kate’s room when Marlena drops by for a visit, so Stefano will contemplate sharing his secret right then and there. However, Stefano will ultimately think he’d better be a bit more careful about how he drops the bomb.

At the hospital’s holiday party, Stefano will swipe Roman Brady’s (Josh Taylor) Santa suit and don it himself. Kayla Brady (Mary Beth Evans) will catch a glimpse of “Steve” and follow him soon after. Nevertheless, Stefano will keep his eye on the prize. He’ll slip a black onyx brooch in Marlena’s purse, which she’ll show to John Black (Drake Hogestyn) after the gathering.

Marlena and John will recall that black onyx was an important part of her past with Stefano. They’ll also consider a premonition from Celeste Perrault (Beverly Todd), which will warn them Stefano’s in Salem and could cause trouble. At the Horton house, Julie Williams (Susan Seaforth Hayes) will fear nobody’s going to show up for the annual tree-trimming. She’ll be bummed until her loved ones eventually file in and help her celebrate as usual.

As for JJ Deveraux (Casey Moss), he’ll have a confession to make. Days of Our Lives spoilers say JJ will admit his addiction to Jack Deveraux (Matthew Atkinson) and Jennifer Deveraux (Melissa Reeves). They’ll be proud of their son for confessing his problems and wanting to get better.

Other Days of Our Lives spoilers say Hattie will pop in Kate’s room and find “Steve.” She’ll certainly battle some confusion over the strange bedfellows. Over with Nicole Walker (Arianne Zucker), she’ll catch Brady Black (Eric Martsolf) off guard by pulling him close and planting a big kiss. There’s a good chance Brady will gently tell Nicole they can’t do this. He knows she still loves Eric Brady (Greg Vaughan) and is just acting from a place of pain.

Brady still loves Kristen DiMera (Stacy Haiduk) deep down – and he could come face to face with her sooner than he expects. DOOL fans will see Kristen and Lani Price (Sal Stowers) make their joint Salem comeback. It won’t be long until Lani strikes a blow that hurts Gabi Hernandez (Camila Banus), but she’ll do it in a roundabout way.

Some fantastic scenes are coming up, so don’t miss all the action. We’ll give you updates as other Days details emerge. Stay tuned to DOOL and don’t forget to check CDL often for the latest Days of Our Lives spoilers, updates and news.