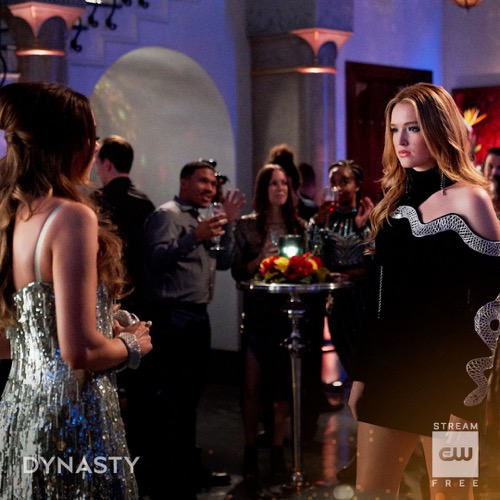 Tonight on the CW Dynasty the reboot of the 1980 series that followed the Carrington family airs with an all-new Friday, November 8, 2019, episode and we have your Dynasty recap below.  On tonight’s Dynasty season 3 episode 5 “Mother? I’m at La Mirage,” as per the CW synopsis, “Adam receives unexpected attention from Blake while Fallon turns her attention from her former flame to her former business.

Kirby makes a new friend despite Culhane’s disapproval. Sammy arranges for a very special guest for his grand opening, and Dominique invites Jeff as her guest for some mother-son quality time.”

Adam was in a better position than before. He was injured and everything, but now Blake was being attentive to him. He and his father were getting closer and everything seemed to be going well. Then Cristal came up with a bright idea. She suggested they hire a nurse to look after Adam and that was going to be cutting into Adam’s time with Blake. Blake was still facing possible prison time. He knew he couldn’t be relied upon to always be there for Adam and so he thought hiring a nurse was a great idea.

The fact Cristal undercut Adam in doing so – had been great for her. Not so much for Adam because it was completely overlooked by Blake and Blake probably never even realized there was a problem. Blake chose to instead focus on his case. He left Adam in Cristal’s hands and she later turned him over to Nadia. Nadia was the nurse. She also seemed very professional and it was a little unfortunate that she got stuck with Adam. Adam was bound to push away anyone Cristal hired and so the poor woman was in for the worst treatment of her life.

Meanwhile, Adam’s sister was also taking a beating. She ran into Liam and sadly Liam was staying firm in wanting to put some distance between them. He even asked for his passport back. He had given to Fallon before he lost his memory and, while he’s sorry about stirring up some memories for Fallon, it wasn’t enough to change his mind. Liam wanted to move on from her. He was done with the relationship and now so was she. Fallon promised to get him his passport the moment she had to free time to look for it.

She then filled up her calendar in order to not look for a certain passport. Fallon started paying attention to her businesses and she wanted to buy back Femperial from Kirby. She later made an offer on it. She was willing to pay two million dollars for a company that sold for a dollar, to begin with, and so that had been dealing. A deal that was rejected. Fallon couldn’t get her company back in a buyout and so she turned to other possibilities. She was speaking to a lawyer about her chances at getting the company back and surprisingly she turned to an old foe.

Fallon turned to Evan. She explained to him that the family lawyers were all busy with her father’s case and so she needed someone new. Someone like Evan. He was a lawyer and he tried to get her thrown back into prison, but Fallon was willing to put that behind her. She needed his help and he came through for her. Fallon found out that she still owns the building where Femperial was stationed and so she promptly threw all of Kirby’s things out on the street. And so Fallon was clearly winning their little war.

Fallon also had a few other things planned for Kirby. She was going to attend the opening of La Mirage and so she wanted to use the opening as a chance to humiliate Kirby even further. Fallon had planned everything. She was set on getting revenge that when Liam called her she had been a little thrown. Fallon still hadn’t looked for his passport. She knew when she handed it over that it would be it for them and so she was stalling on that as long as she could. And unfortunately, her stalling tactics were going to mess with Sammy Jo.

Sam was putting everything into the opening of his hotel. He practically stalked Ashanti in order to get her to come and he was doing his best to get her to perform as well. It had all been a part of his plan. Sam wanted the night to be perfect for everyone, so he had been really been on the edge and he didn’t need anyone playing games at his opening. Not Fallon and Not Dominque. Dominque’s stepdaughter had gotten a job as a bartender at the hotel. She seems to be part of whatever Dominque was planning and so Dominque had been upset with her for coming to Atlanta without her permission.

Dominque wanted to hold off on using her. She said Jeff would lose it if he saw Vanessa and so she did her best to hide her stepdaughter from Jeff. Jeff had attended the grand opening as well and he made peace with Fallon there. It was great to know that Fallon cared because she was genuinely worried when he disappeared and so they put some of the past behind them. Jeff and his mother were happy when suddenly she came up with an idea. She wanted to be put in charge of his new streaming service because she said she could find the talent.

As luck would have it, the first person she wanted to sign happened to be Vanessa. Vanessa was a bartender and she did serve Ashanti a drink right before Ashanti began feeling ill. Which happened to be convenient for Vanessa because Ashanti couldn’t perform at the opening and she could. Vanessa managed to grab a mike and she gave her own performance. It was so noteworthy that Dominque pointed it out to Jeff and suggested they hire her. Dominque was so sure of the idea and so happy that Jeff felt bad about lying to her.

Jeff finally admitted tonight that he was suffering from neurotoxicity. It’s a condition that could kill him at any time. Jeff knew he didn’t have long and so he wanted to settle things with his mother, but she continued to lie to him. Lying came to easy to Dominque. She was devious and she fit in with everyone at the club. Fallon did some dirty dealings too. She got Kirby drunk and then showed Kirby off to the woman Kirby wanted to hire as her new CEO. It ended up being such a disastrous meeting that the CEO quit.

Kirby was left embarrassed as Fallon planned. The other woman even offered to sell Femperial back to Fallon and it was they were discussing the deal that Kirby finally realized what was happening. Kirby accused Fallon of doing all of this to her because of Liam. And she was right! Fallon was still hung on Liam and she couldn’t move past him or start over with Evan until she returns all of Liam’s things to him. And so that’s what she did. She gave Liam back his stuff and as it turns out it helped him to remember her.

And over with Adam, he stopped being mean to his nurse because he realized his father would send him away if he wasn’t doing better and so now he was more willing to accept Nadia in his life. Especially as it means Cristal couldn’t turn his father against him.

Then there was a minor issue with Culhane but he worked it out by himself.