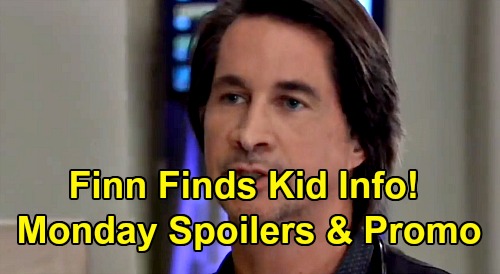 General Hospital (GH) spoilers for Monday, October 21, tease that Ava Jerome (Maura West) will get defensive. She was pretty shaken up after she learned Ryan Chamberlain (Jon Lindstrom) had killed again…for her. Ava collapsed into Julian Jerome’s (William deVry) arms, so he’ll think she needs to get checked out on Monday. At GH, Lucas Jones (Ryan Carnes) will examine Ava and ultimately bring Neil Byrne (Joe Flanigan) into it.

Ava will quickly realize they think she’s having some sort of nervous breakdown. Her wild outburst won’t help as she works to convince them otherwise. Even so, Ava will contend that she’s entitled to be rattled over Ryan’s obsession. She fears Ryan will just keep killing until he finds a way to get what he wants.

Meanwhile, Brad Cooper (Parry Shen) will try to get to the bottom of the flowers that were went to him. He’ll eventually call the florist and determine that they were paid for in cash. They won’t have any record of who sent the bouquet since there was no card.

When Julian gets updates on the special delivery, he’ll hint that maybe it was another lover. Brad will be appalled by the notion that he’d cheat on Lucas. In addition to the fact that he loves his husband, Brad’s got too much on his plate to be sleeping around. He wouldn’t dare tack on another secret right now.

Julian will probably acknowledge that’s true, but that still leaves them with the mystery of who sent the flowers. General Hospital spoilers say Brad will confess that he suspects Nelle Benson (Chloe Lanier). He won’t be able to think of anyone else who’d have a reason to show appreciation.

Over with Hamilton Finn (Michael Easton), he’ll follow up on his hunch about Hayden Barnes (Rebecca Budig). Finn feels like Hayden may be lying about her miscarriage, and GH fans know the doc is right. Their child indeed survived, so it’s great that Finn’s being smart about the clues. He’ll turn to Curtis Ashford (Donnell Turner) on Monday and try to gather a bit more information.

Finn will ask Curtis about Hayden’s time away. He’ll wonder how much Curtis knows about what Hayden was up to, so Curtis may be in a tight spot. Although Curtis doesn’t know anything about Hayden’s kid, he does know about the plot she’s working on with Jasper “Jax” Jacks (Ingo Rademacher). Curtis may dance around that part, but it’s not the info Finn really needs anyway. He’s looking for personal details, not details on Valentin Cassadine’s (James Patrick Stuart) takedown.

Elsewhere, Hayden and Elizabeth Baldwin (Rebecca Herbst) will squeeze in some sister bonding time. Liz will enjoy the distraction since all this Franco Baldwin (Roger Howarth) chaos is so stressful. She’ll let Hayden open up a bit, but which will deepen Hayden’s deception. The longer Hayden allows this to go on, the more lies she’ll have to tell.

Hayden may have to talk her way out of a tricky moment or two along the way. She should be uncomfortable when Liz suggests Hayden would be a wonderful mother. Hayden will put on a smile, but she’ll undoubtedly hate lying right to Liz’s face. Nevertheless, it’s what Hayden feels she has to do at this point.

At the Metro Court, Carly Corinthos (Laura Wright) will tell Sasha Gilmore (Sofia Mattsson) that they’re long overdue for a chat. Michael Corinthos (Chad Duell) will join in this discussion and try to keep Carly’s anger under control. She doesn’t have the same faith in Sasha, so she’ll want to put Michael’s girlfriend on notice. If Sasha tries to use Michael in any way, she’ll have to face Mama Bear Carly’s wrath!

Finally, Jax will be confused about where Valentin and Nina Reeves (Cynthia Watros) stand. He’ll question Nina about it, so she’ll have to explain. Nina may defend Valentin and argue that she’s forgiven him, but something feels off about her behavior. It seems like Nina could be playing Valentin, but she may keep that tidbit to herself a little longer.