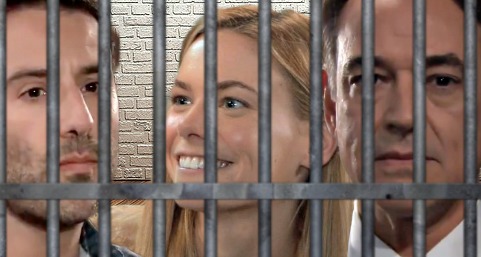 General Hospital (GH) spoilers tease that Shiloh Archer (Coby Ryan McLaughlin) finally went too far. As GH viewers know, he was already in serious legal trouble. At best, he was going to serve 15-20 years on a plea deal, but now he’s made his situation much worse.

Shiloh totally went off the deep end when he decided to kidnap Sam McCall (Kelly Monaco) and tried to blackmail Jason Morgan (Steve Burton) into becoming his memory mapping subject. Of course, that plan failed, and then a desperate Shiloh really lost it. He kidnapped Cameron Webber (William Lipton) and ultimately used Franco Baldwin (Roger Howarth) for his memory mapping subject.

Of course, all of these desperate moves were Shiloh’s last-ditch attempt to discover where a large stash of cash is located – something that only Drew Cain (Billy Miller) knew. Ironically, those memories will finally be unearthed since it looks like Franco will end up with Drew’s pre-2012 memories. But they surely won’t end up helping Shiloh at this point; rather, they may help put him away.

Speaking of being put away, it doesn’t seem like Shiloh has any hope of ever running around Port Charles a free man now. After what he did to Sam, Cameron, and Franco, there’s just no way that a judge is going to set bail for him, which can only mean one thing – that’s he’s headed for Pentonville to be held until his trial.

So, what’s ahead for Shiloh now that he’s surely going to Pentonville? Well, first off, we have to think about his personal safety. After what Shiloh did to Sam, surely Jason and Sonny Corinthos (Maurice Benard) are going to see to it that Shiloh ends up paying the ultimate price, right? Can we expect some sort of prison “accident” to happen soon, totally taking Shiloh out of the picture?

Or will Sonny and Jason decide to wait and let the dust settle a bit before Shiloh meets his end? They might not want to arouse suspicion by eliminating Shiloh right away. We also can’t forget that Sonny promised Kristina Corinthos-Davis (Lexi Ainsworth) at one point that he wouldn’t “disappear” Shiloh, but maybe in light of what Shiloh’s now done, all promises are now off.

At any rate, it looks like Shiloh will end up at Pentonville in the short term. And that will be interesting, given that Lorraine “Harmony” Miller (Inga Cadranel) is also there. They could have some intense run-ins, since Shiloh blames Harmony for landing him in legal trouble to begin with. Harmony could wind up in danger from Shiloh if she’s not careful.

And of course we can’t forget that Nelle Benson (Chloe Lanier) is also at Pentonville, as well as Ryan Chamberlain (Jon Lindstrom). It will be interesting to see if Ryan and Shiloh cross paths, especially since Ryan was recently shown picking up Shiloh’s Dawn Of Day book from the prison library cart. Ryan may feel like he already knows Shiloh psychologically, but how will the two men get along?

If Shiloh’s not careful, he could sufficiently irritate Ryan and face danger from being killed by Port Charles’ most notorious serial killer! Shiloh could wind up facing danger all the way around, if he’s got Ryan out to get him, plus any inmates who might be carrying out “elimination” orders for Sonny and Jason.

At any rate, it will be interesting to see what happens with Shiloh now, since it seems like his days on the outside are over and his life will be in danger in prison. Do you think that Shiloh will meet his end soon? Stay tuned to the ABC soap and don’t forget to check CDL often for the latest General Hospital spoilers, updates, and news.