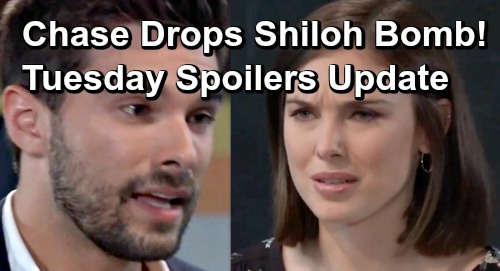 General Hospital (GH) spoilers update for Tuesday, June 11, tease that Peter August (Wes Ramsey) will have a deep discussion with Maxie Jones (Kirsten Storms). He’ll suggest he thought about throwing in the towel on love, but Maxie will insist that’s something he should never give up on. Peter may admit he agrees with Maxie now. He’ll feel like Maxie showed him what love could look like, so there’s no turning back now.

Of course, happiness tends to be short-lived on soaps. Peter and Maxie will face some bumps in the road soon, but we’ll see if Paxie can weather the storms. In the meantime, let’s talk about Willow Tait (Katelyn MacMullen) and the tough blow she’s about to face. Harrison Chase (Josh Swickard) will break the news of Shiloh Archer’s (Coby Ryan McLaughlin) freedom in Tuesday’s new GH episode, June 11.

Chase will hate that Shiloh once again poses a threat, but he’ll resolve to protect Willow and “Wiley Cooper-Jones” no matter what. He’ll do his best to curb Willow’s worries, but she’ll remain on edge. Over with Sam McCall (Kelly Monaco), she’ll fume over Shiloh getting off the hook. Naturally, Shiloh will take the opportunity to taunt Sam and make it seem like he’s unstoppable.

Sam won’t think there’s anything left to say between them, so she’ll urge Shiloh to get lost. However, Shiloh may resort to veiled threats before he heads out. Sam will be shaken up by this faceoff, but she’ll refuse to lose hope. She’ll have even more hope once Jason Morgan (Steve Burton) assures Sam that Shiloh’s going down. One way or another, Jason’s getting rid of this guy!

Jason will also talk to Sonny Corinthos (Maurice Benard) about that on Tuesday. He’ll grow impatient since Shiloh continually works around the legal system. General Hospital spoilers say Jason will think they should do the same. He’ll be ready to take action and forget about all the planning. Basically, Jason’s deadly fury will be unleashed and he’ll want to dash off and murder Shiloh immediately.

Sonny may insist they should delay on any deadly moves because of Kristina Corinthos-Davis (Lexi Ainsworth). She would battle serious guilt if Jason and Sonny made Shiloh disappear. Kristina will reconvene with Sonny soon and remind him of that on Tuesday. She’ll argue that she needs to stand on her own. Part of that is facing Shiloh and helping to take him down legally.

Still, there are other people involved like Lucas Jones (Ryan Carnes), Brad Cooper (Parry Shen), Willow and “Wiley.” General Hospital spoilers say Sonny and Jason will have to put a lot of thought into their next move. Dr. Neil Byrne (Joe Flanigan) will wonder about Alexis Davis’ (Nancy Lee Grahn) next move as well. He’ll ask what she’s planning on doing, but Alexis may not know the answer.

Kristina and Sam are safe for now, so that’s what’s most important here. Alexis may just hope to fight Brucas’ legal battle if need be and continue to focus on her daughters’ safety. We’ll give you updates as other GH details emerge. Stay tuned to the ABC soap and don’t forget to check CDL often for the latest General Hospital spoilers, updates and news.