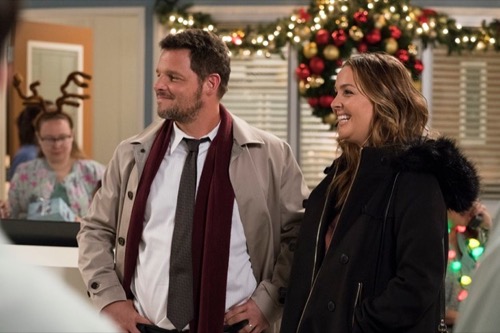 Meredith was in a love triangle. She didn’t want to admit she was involved in a love triangle, but everyone at the hospital could see it. Meredith was torn between DeLuca and Linc. Linc was very thoughtful and he knew to give Meredith cookies for her kids as her Christmas present because odds are she wasn’t going to be one baking them for Santa. Meredith’s friends were also Team Linc. Jo and thereby Alex wanted Linc for Meredith because she believed Linc would be the perfect countermeasure to Meredith’s grumpiness and so the couple invited both to their New Year Eve party because Jo was hoping that it could finally seal the deal between them. Except Meredith didn’t ask Linc to go with her as her date and she instead asked Deluca.

DeLuca was the man she was dreaming about. He doesn’t take any crap from Meredith and she must be secretly turned on by that because she invited him to the party. DeLuca and Linc both dressed to impress for this party and so they thought they would see Meredith, but she sort of stood the both of them up. Meredith had Schmidt pass on the message that she was busy with a patient. She didn’t bother to call them herself and so she was still a little rude even as she did have a good excuse. Her patient Natasha Deon had woken up from a month-long coma and needed to be constantly watched. Meredith and indeed every doctor involved with Natasha’s care had wanted to get her through recovery.

Natasha was in a nasty car accident. She still has injuries from that time that made it hard for her to walk, speak, and even eat. But everyone at the hospital had thought the world of Natasha. She woke up and was ready to go. Natasha was able to speak quite clearly when the tube was removed and she showed early signs of mobility within the first few weeks. All the doctors thought that Natasha was the poster child for recovery and so they had been surprised when out of the blue she took a downturn. Natasha was supposed to have surgery to remove a plate from her spine and the doctors couldn’t do it because they noticed fluid in her abdomen. They first had to drain the fluid before they could touch her spine and that meant opening a wound that was just beginning to heal.

Natasha was taken into surgery and the doctors got to talking. They all noticed how Schmidt was less “Glasses” like. He said that he had gotten contacts, but that hadn’t been it. Jo mentioned that he had been assigned something and hadn’t messed up at all. That’s what they met when they said he’s changed. Schmidt confessed that he’s in love and that’s what they’ve been seeing. He went on to say that he was with someone that was confident and who loved him so that in turn made him confident. He also said that he was gay and was dating a man. He called realizing that and finally being happy was life-changing. And, really, no one could begrudge Schmidt his new found happiness because what he described was beautiful.

The doctors had been happy for Schmidt and they told him so, but their patient Natasha’s problems were bigger than they thought. The fluid in her abdomen was coming from a ruptured bowel and so the surgery was a lot more intensive than they planned. It set back Natasha’s recovery rate and it was like hits kept coming. She suffered a pulmonary embolism and had needed more surgery to fix that, but she also had to go back on the tube. She then began running a temperature and her condition soon deteriorated to the point she was sicker than when she woke up. There didn’t seem like there was anything the doctors could do to slow down how sick she was becoming and so Natasha made plans.

Natasha’s boyfriend has been there for her from the beginning. He was the one that told her the embolism left problems with her heart as well as most of her organs and so she realized that wasn’t the type of life she wanted. It certainly wasn’t the life she envisioned with Garrett. They had planned to get married at the Planetarium and when her condition first took a turn they thought they could settle for a courthouse wedding, but Natasha was tired and she decided to come off the ventilator knowing that she would die. She wanted her final moments on earth to be her marrying Garrett and so Meredith arranged a wedding in Natasha’s hospital room. She got someone to marry the pair and collected a bunch of doctors shows the star constellations on their smart device, therefore, the couple still got to marry under the stars.

Meredith had seen Natasha and Garrett fight for what they had until they couldn’t anymore and she realized that she didn’t fight at all. She gave up DeLuca without a thought and had even arranged a date for Valentine’s with Linc, but at the last minute she stood up Linc and celebrated the holiday with DeLuca on the roof of the hospital. It hadn’t been the grand restaurant she planned with Linc and that was okay because the rooftop as it turns out was more her style. She was going to take a chance on DeLuca and she wasn’t the only one celebrating the holiday right. There had also been a very happy Ben that forgave Bailey for calling for a break from their marriage and so those two celebrated getting back together at their home.

Catherine whose condition was slowly improving from her surgery had finally leaned on her husband and the two got to celebrate the way Catherine has been dreaming since surgery – in their bedroom.

Even Teddy went out on a date. She went to the beauty parlor where she received treatments and massages with Dr. Koracick.

Amelia and Owen got to share some flowers and they fit in some time to visit Betty at the rehab, but it turns out Betty had a few secrets she needed to share with them as part of the program and that nearly soured the mood.

And so the only one that was rejected for Valentine’s was Linc who deserved a lot better than to get stood up at a restaurant.