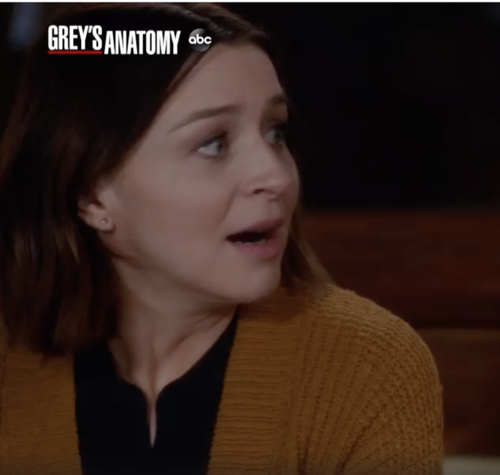 Meredith created even more drama when she skipped out on community service. She got back to jail for that and, so while she awaits her fate, her frenemy Bailey was doing her best to tell her husband the good news. She was pregnant. She was happy about it and she wanted Ben to feel the same way she just had to tell him when he’s awake enough to hear it. Ben’s been working a lot of shifts lately. He was so tired when he got home that it didn’t make much sense to talk to him in that state and so Bailey kept finding reasons to delay telling him.

Bailey even used work to hide. She was still running a hospital and this time she had stepped in when a case caught her interest. The patient was a woman who may have tried to kill herself. Unfortunately, she had botched her attempts and so the doctors were doing their best to preserve her life. Bailey had asked Jo to join her and Jo felt like she had to assist. She knew the patient. They met at the treatment facility and it turns out the patient had been one of her doctors. Jo had had several of them at the facility.

The patient stood out because Jo had thought she was the worst. The doctor pushed her and she forced Jo to confront her own pain. If she knew now how much Jo was freaking out about treating her, she would have been disappointed. She pushed Jo like she did because she wanted Jo to get better and so it came as a nasty shock to Jo that someone who seemed so strong could have done this to herself. Jo figured if the doctor could do this that what does that say about her? Jo began falling apart and she didn’t in the worst possible place.

Jo fell apart in the pressure chamber. The doctors had taken their patient there because it was the best thing for her and yet the confined spaces were working against Jo. She tried to go back to the calming technique that the therapist taught her and it didn’t work. Jo had needed to take her mind off her own panic attack and so Bailey blurted out that she was pregnant. It got Jo’s mind off what her issues and she had to absorb what Bailey told her. And so the two of them were so busy with themselves that they didn’t know Meredith came to the hospital.

Meredith went there because her daughter was sick. Zola said she had headaches and Meredith was afraid Zola’s past medical history could be working against them here. Its also why Meredith had to take Zola to the hospital she trusted the most. She took her daughter there because that’s where Derek first performed brain surgery on their daughter and this time she put her faith in Koracick who she knows taught Amelia. Amelia and Maggie tried to be there for Meredith as Zola’s past did come back to haunt them and as it happens the little girl needed more surgery.

Maggie and Amelia helped to get Meredith of the surgery by talking to her about what’s been going on. Maggie admitted that surgery might be her truest love and how she felt more alive during a rare surgery that she ever had when she was with Jackson. Meanwhile, Amelia talked about her relationship with Linc. They were having a baby together and she didn’t know anything about him. She thought about that one day when she tried to recall if he ever told her what his parents’ names were. And guess what, he never told her that or anything else.

Richard’s friend Gemma had come onto him. She used his previous history of cheating on his wife with someone else as an excuse to say he’s done it once before and so why he couldn’t he do it again? But Richard still loves Catherine. He learned from his mistakes with Adele and he wasn’t going to repeat them. If anything he felt sad for Gemma. She was acting out of character because she was going without a sponsor and was looking for ways besides booze to hate herself. And Richard wasn’t going to provide her an excuse to relapse.

Richard advised Gemma to keep looking for the right sponsor. He thought that might help her because he surely wasn’t going to do it and so he left her at the restaurant by herself. She needed to think about her inappropriate actions and he wanted to go home to the house he shares with his wife. Richard no longer cared if his marriage was perfect. He just knew he wanted it and that he wasn’t going to jeopardize it anytime soon. Richard was off enjoying his newest epiphany and maybe this will make him resent Bailey less as well.

Bailey created a huge stink when she fired three of her best doctors. She had done her job and they hadn’t reacted well to it. Richard had pushed his wife away, Alex took a job he hates, and Meredith couldn’t be in the OR with her daughter. Zola had to deal with Koraick instead. He was a great doctor and he got her out of surgery doing much better. It just still irked Meredith. She had missed out on surgery and she missed her appointment with the judge. Meredith was not in a lot more trouble than before because she was genuinely facing jail time.

Bailey, however, had finally come clean to Ben. He was so happy about the pregnancy news that he twirled her around the room and then had to stop because she was getting nauseous. Bailey had also learned a lot from being around Jo. Jo talked about what she did with the therapist and she helped Bailey to see that she was actually more prepared this time than she was the last time with her son. And there was even great news for Jo because her therapist, Carly, hadn’t tried to kill herself.

All Carly did was read by her heater and not put in fresh batteries in her CO detector. So, Carly wasn’t suicidal. She was a long time ago, but not now because she said she was never again going there and so that reminded Jo that she was getting stronger by the day.