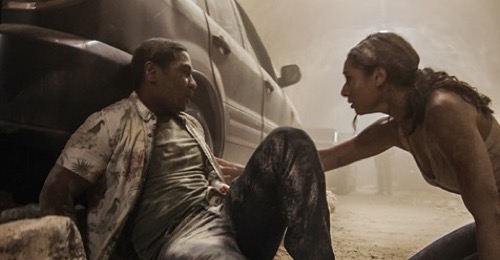 Tonight on CBS Hawaii Five-0 air with an all-new Friday, October 4, 2019, episode and we have your Hawaii Five-0 recap below.  On tonight’s Hawaii Five-0 season 10 episode 2 called, “kuipeia e ka makani apaa, ” as per the CBS synopsis, “Tani and Junior must plot an escape for themselves and several civilians after they become trapped inside a deadly tunnel collapse, while Five-0 investigates the cause and culprits of the cave-in.

Also, Eddie the dog uses his field experience and sniffs out a bomb that has been planted in McGarrett’s home”

The Kapahulu tunnel collapsed. Tani and Junior noticed it on their way to work and they decided to offer their help. It was something their boss McGarrett would have done if he was there, but McGarrett wasn’t there and he didn’t find out about the collapse till much later on. He was too busy dealing with a bomb at his house. It turns out someone left it for him in his garage and he was stopped from setting it off thanks to his dog. Eddie had sniffed out the bomb beforehand. He also warned McGarrett and so McGarrett was dealing with the bomb squad when everything went down with the tunnel.

At first, Tani and Junior were merely guiding people out of the tunnel. It was after they had been doing this for a while that Junior heard gunshots and realized something was using this tragedy to cover up a crime. Junior tried to follow the sound. He even got close enough to see some guys fleeing the scene when a second explosion occurred at the tunnel and it trapped both Junior and Tani inside. Along with several others. And so Tani went looking for Junior because she didn’t know what happened or what he saw.

Junior was lucky, though, because he had just been knocked out by the blast rather than people committing the crime. It seems he witnessed a prison break. Junior saw men killing the guards and they were also responsible for the second bomb. They didn’t set it off until after they had made their way out of the tunnel. Junior believes that the bomb was a diversionary tactic and that the prisoners wanted to use that to create confusion long enough for them to make it off the island. Junior also got the word out about the prisoners before the collapse.

It was like the last thing did before the second collapse. So, while Junior and Tani were figuring out a way to break out, the rest of the team were hunting down he prisoner. They had gotten the license plate and their search on it came back as belonging to the Department of Defense. The only one they knew with that connection was Quinn Liu. She was still in Hawaii and McGarrett knew she would like getting into trouble. And he wasn’t wrong because Quinn had jumped at the chance to help, she searched for information on the transport vehicle and it led her to a redacted file.

Quinn hadn’t the clearance to access it. But did that stop her? No, it did not and she ran into Danny and Adam back at the safehouse for the former prisoner. The guards there had been killed as well. They were also apparently feds. The feds had borrowed the transport vehicle for the DOD because their prisoner was very dangerous and so lucky for the team the guards had left behind a tape. It seems they had been carrying out interviews with their prisoner. They even got him to admit his name on tape and so that’s everyone identified their missing guy as Jackson Wilcox.

Wilcox was this big time distributor of methamphetamines. That it he was before he apparently died after the feds raided his place and so the team were able to piece together what happened pretty fast. They figured out that the feds faked Wilcox’s death. It removed Wilcox from his illegal business and it stopped everyone from suspecting how the feds would eventually get information on the other big shots. Wilcox knew quite a few names. He also needed to be removed far from his allies without leaving US soil and the best place to do that was Hawaii.

What they couldn’t figure out was why he circled back to the safehouse? He already made his escape and so coming back to kill the guards seemed a little too much. The team therefore called in the feds. It was when the feds showed up that they realized that there were supposed to be four bodies and not three. Their guy Wilcox had unfortunately taken an agent prisoner. The feds believed he needed this prisoner because he wanted to find out where the feds put his wife and he was just going kill his way into finding out the information.

Shayla was actually being broken out of protective custody while the feds were finally filling in Five-0. Meaning by time Five-0 arrived at the apartment where Shayla was being stashed, she was long gone and there were dead guards as well as one of Wilcox’s men left behind. The guy was the silent so he wasn’t talking. He had needed to motivated and the team found just the right thing when they evidence that Shayla was having an affair. She was using a burner cell to send racy text messages to a lover. And the cell was traced back to Wilcox’s brother Mike.

Mike’s blood was also found at the entrance to the tunnel. He had taken a bullet when he helped his brother escaped and so it begged the questioning why he was doing all of that when he was having an affair with Shayla. The team dug into this Mike. He had also purchased two plane tickets for himself and Shayla to leave the island. There was nothing there for Wilcox. He brother must have helped him escape as a means to kill him and so the team put them before Wilcox’s guy in order to get him to talk.

Danny and Adam were worked with Quinn to find Wilcox in time. They found out that Wilcox’s brother sold him to a rival and they saved his life. Even if Wilcox did manage to escape again. The rest of the team however were working together to evacuate the tunnel. McGarrett had come up with a plan to help the people escape through the air vent and it worked until Junior, who went last, had had his rope split open with him almost to the top.

Tani had to go back down into the tunnel to get him, so she saved his life and she started up the rumor mill about the two of them with their friends.

And it was when they were all having burgers together that McGarrett found out the bomb squad didn’t find anything that could identifiable with who created it.

Not that McGarrett didn’t have his suspicions.