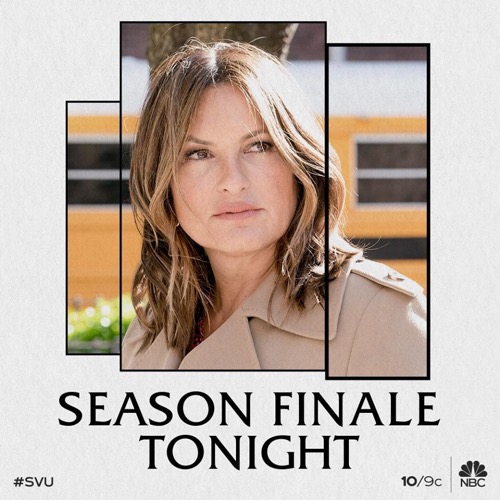 Tonight on NBC Law & Order SVU returns with an all-new Thursday, May 16, 2019 episode and we have your Law & Order SVU recap below.  On tonight’s Law & Order SVU season 20 finale episode 24 as per the NBC synopsis, “Lt. Benson suspects Rob Miller is behind the mysterious death of a girl found dead in the Hudson River but can’t prove it. Despite having only circumstantial evidence ADA Stone takes the case to court before Miller can destroy more lives.”

Rob Miller made bail. He shouldn’t have been allowed bail much made it, but he did and then he used his position out in the world to get the case against him to be thrown out. The feds had dropped the charges. Everyone knew that Rob had bribed or blackmailed his way out of that case and so the only way SVU could get Rob was to go through Nikki. Her rape could get Rob sent away for at least ten years and so Lt. Benson went to speak to Nikki. Nikki had changed her story and claimed the sex was consensual because she had been frightened by Rob Miller. He was a dangerous man that needed to be put away and Benson was hoping she could get Nikki to again change her statement. And she couldn’t.

Nikki had been threatened a second time. Her daughter was out walking the dog when a woman told her to tell her mother to keep her mouth shut and right afterward someone poisoned the teenager’s dog. It was meant as a message. Nikki knew that she would die next if she talked and so she wasn’t going to risk. She told Benson as much and Benson then tried a new tactic. She asked after Nikki’s phone. The one Rob wanted so badly that he drugged and raped Nikki to get it. Nikki wouldn’t say what was on her phone because Attorney-Client Privilege was still in place and she couldn’t be disbarred on top of everything else. Nikki wouldn’t say and she asked Benson to leave. Benson tried figuring out what Rob was looking for on her own with her team and they couldn’t get any answers.

All the leads they had on Rob dried up when the feds back down on pressing charges. No one wanted to talk about him. The witnesses against him were either claiming memory lapses, or they lawyered up, and some even left the state. They didn’t want to go against Rob and so Benson was forced to put her case against him on the backburner. She didn’t like it and her team said that they had other priorities. They had gotten a new case. The squad was called to the scene of potential murder because a teenager was found dead and naked in the Hudson. The girl didn’t have an ID on her and her prints weren’t in the system. She was a Jane Doe and certain things about her didn’t add up. She had fentanyl in her system and wasn’t an addict because it wasn’t found in the root of her hair.

Jane Doe also had organs that were practically liquidity. It was like she was dropped from a greater height than any bridge and so she may have been dropped from a plane. Jane Doe also had a rare eye condition and so they used her prescription to finally identify her. Jane Doe’s real name was Lindsay Parker. She was sixteen and hadn’t been reported missing. Benson and Rollins went to go do the notification because they wanted to ask why she hadn’t been reported missing, but they ran into Rob Miller at the house. He was Parker’s family attorney. Rob was called when Lindsay didn’t come home because her parents found out she had lied about staying with a friend and wanted to hire a private detective to find her.

The detectives saved the family from having to hire someone and they delivered the news. They asked Lindsay’s parents to identify a picture of her body on a slab and that’s how it hit them that she was dead. The parents were devastated. They hadn’t called the police because this wasn’t the first time that Lindsay went to a party and came home late. They just thought it was another wild child incident, but they did mention that Lindsay went out with her friend Brooke and Rob said he would help ensure the cops got everything they needed. Only Benson doesn’t believe in coincidences and so she asked Rob how he came to be there when a teenager was murdered. And Rob tried to deny any wrongdoing but Benson just didn’t believe him.

The detectives talked to Lindsay’s friend Brooke. Brooke admitted they went to a party and that it isn’t wasn’t the first one. Brooke and Lindsay have been attending sex parties for a while, but underage sex parties weren’t the first time that Benson heard of it in connection to Rob Miller. Miller went after a client of Nikki’s that might also have been involved and so the man could have overreacted with Nikki by going as far as to rape her because he was afraid she had proof of his involvement with these parties. The detectives asked Brooke if she recognized Miller and she hesitated. She recognized Nikki’s client and she recognized someone else that the detectives put away. It was a guy involved with the Italian sisters and so the detectives talked to him.

The man said sure he remembered Brooke and he also knows Rob Miller was at a party in the Hamptons that Brooke also attended, but he refused to testify and he wouldn’t say anymore. It turns out that Rob was behind underage sex parties in the city and if he ran into a daughter of his clients then maybe he’d give her a hotshot to get rid of her! Benson only had circumstantial evidence when she went to Stone and neither of them could do anything with it. So Stone concocted a plan. He worked with Nikki and Finn to frame Rob. They made it look like Rob was bribing Brooke to forget his face and it would have worked if the defense hadn’t called Nikki to the stand. She was forced to admit that she framed Rob.

Stone asked her why she did it and she mentioned her real fear of Rob Miller. He was dangerous and he could threaten anyone he likes. Nikki gave such convincing testimony that she swayed the jury. They found Rob Miller guilty on murder with little to no real evidence, but now he was going away and Benson was safe. She was the reason why Stone did all of it and he confessed to her after the trial.

Stone said he let his feelings for her cloud his judgment and so he was walking away from his position as the ADA attached to her office.

They took down a serial offender but lost a friend in the process.