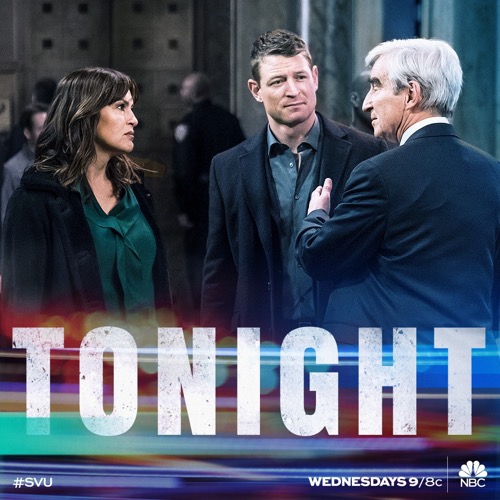 Tonight on NBC Law & Order SVU returns with an all-new Thursday, October 24, 2019 episode and we have your Law & Order SVU recap below.  On tonight’s Law & Order SVU season 21 episode 5 as per the NBC synopsis, “The detectives are spread thin when three major cases come in at midnight. Rollins and Carisi argue over an arrest.”

Manhattan Special Victims Unit was flooded one Friday night with emergency calls. They had had one foot out there when they received three different calls to three different rapes, and they all happened right before midnight so the detectives found themselves busy at the very last moment. Detective Finn went to Joelle Fuller. She was raped by her husband Leon and it had been her son Andre who called the cops. The boy had seen everything. He waited to call the cops after his father left and he only called because he saw his mother was bleeding.

Joelle was a different story. She didn’t want to report what happened to her and she complied with Finn’s orders because she had been too weak to turn down an ambulance. Even if Joelle hadn’t wanted to file a report against her husband, it was too late to shut it down. Her son was quite graphic on the 911 phone call and he told the police everything that his father was doing. He also sounded so scared that the recording of the phone call had almost broken the detectives listening to it.

The boy hadn’t deserved that and neither did his mother. The two of them were clearly traumatized after everything that happened, but this wasn’t the detectives’ only case. They were also working two other rapes. One of which involved a teenage girl. Chloe Cooper said she had used the car service HailMe and that the driver had attempted to rape her. She just barely got away when she called her father for help. Her parents were unfortunately wealthy. They had connections and they even used those same connections when they spoke to ADA Hadid to report the rape.

The Coopers were extremely hands-on. They wanted to be a part of everything and they also demanded actions now rather than later. They said they wanted justice for their daughter and they just happened to go about it the wrong way. The Coopers pushed the boundaries on everything. They wanted to be there when their daughter went to the hospital and they started talking for her when she was supposed to ID her attacker. Rollins had had to remind them that this crime happened to Chloe.

Chloe was the one that needed to identify her attacker. There was also nothing her parents could do to ensure the man went to jail because that was the detectives’ job. Rollins had tried to find evidence against the driver who was identified as Mohammad Sayeed and she ran into the brick wall known as his lawyer. His lawyer showed that the car service app reported that Chloe never showed for the ride. She had missed it and Mohammad had taken another man to Brooklyn. So, he couldn’t have assaulted Chloe.

Detective Rollins had taken the unraveling of her case personally. She blames herself for it falling apart and she lashed out Carisi because as an ADA he couldn’t help her anymore. He now had to play politics. He couldn’t take the risk on a case like Mohammad’s and therefore he couldn’t back up Rollins when she needed it the most. She just had to deal with her new situation like everyone else. Then there was the last rape. The victim in Rape #3 was a transgendered prostitute by the name of Lakira.

Lakira has been down this road before. She was first attacked when she was a teenager and her mother had thrown her out of the house. The detectives working that case had told her to take off the makeup and go home. So, she was a little skeptical of the justice system. She didn’t think anyone would believe her and yet Detective Tamin did. Tamin believed Lakira when she said she was raped. Lakira says that she went with a john for the night and that she went down on him. He had been too soft so he got angry. Lakira then teased him about it and so he started beating on her.

Until the john decided to use a flashlight to rape her. Lakira described him for Tamin and she also mentioned that she’s him around before. It turns out he has a type. Tamin later identified him as Paul Davies and Davies likes transgendered women. He goes by the boardwalk where they usually are and he tends to beat them in order to get a hard-on. Except this time with Lakira had been different and so Davies played it smart. He ditched his car after the rape. He claimed it was stolen and had even come up with a story for himself where he allegedly ordered an Uber that night.

Tamin, therefore, had the trickiest case out of the lot. She had witnesses who recognized Davies and saw him pick up Lakira on the night of the rape and they could give evidence that he was violent, but they were also prostitutes. Davies’s lawyer would argue that they weren’t credible and so Tamin was sidelined from the case. Captain Benson took over because thought Davies needed a more experienced hand. She and Carisi questioned Davies over his involvement in the area and they got him to admit on record that he knows Lakira.

His lawyer tried to argue that wasn’t enough to convict him. Only he said what he said and it was now a matter of record. Benson arrested Davies and Tamin got to pass on the good news to Lakira. Lakira hadn’t thought that was going to happen though she was happy that it did and so she had to face the question if she was going to openly testify against him. Lakira hadn’t been sure she wanted to do it and it had been Tamin that convinced her to take the chance. And so Tamin ended up closing this case anyways or at least that’s what she thought.

Lakira later dropped her case against Davies. Davies had paid her off and so there was really nothing Tamin could have said that would have changed Lakira’s mind. Rollins meanwhile had kept investigating. She found out that there had been misidentification in Chloe’s case and that the teenager really did miss her ride. She had gotten into a stranger’s car and that stranger just happened to have an agenda. Sanjay Patel wanted revenge because his father who was a cab driver who had lost his business to these app services and so Sanjay purposely scared Chloe to teach her a lesson.

Sanjay confessed to everything. The detectives had a firm case against him and they also had a firm case against Leon Fuller as well. Leon’s wife had wavered back and forth over testifying. She didn’t want to lose the child support payments, but Benson reminded her that her son was more important. Andre needed his mother and he couldn’t afford to lose her to one of his father’s rages. Leon would have killed Joelle eventually if she didn’t stand up to him and thankfully she did. She was going to testify against her husband and send him to jail.

And so two out of three cases was still a win for SVU.