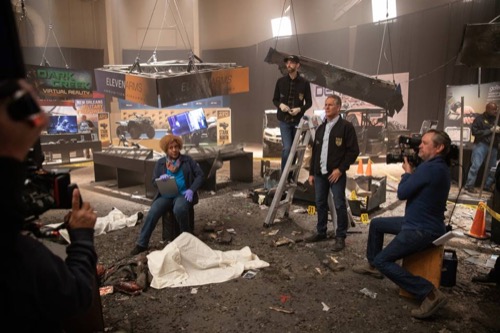 Tonight on CBS NCIS: New Orleans returns with an all-new Tuesday, April 30, 2019, season 5 episode 22 called, “Chaos Theory,” and we have your NCIS: New Orleans recap below. On tonight’s NCIS: New Orleans episode as per the CBS synopsis, “The NCIS team investigates a deadly bombing at a military museum event with over 1,000 people in attendance,.”

A bomb went off at an arms show. There was plenty of specialists in attendance and two of them tried to deactivate the bomb, but it still went off. It killed the two closest to blast and so both Dr. Alice Logan who was a ballistics expert and Seaman Apprentice Ben Frisell who took a one-day course were DOA. Some of the team wondered why they had stuck around. Only neither was the type to walk away when they see a crisis and so NCIS wanted to get justice for them as well as the countless others that had been injured in the blast. Like Seaman Neila Diseris. She on a date with Frisell when they heard Logan spot the bomb. Frisell had gone over to the doctor and he asked Diseris to clear the room. He wanted to protect as many as possible and that included Diseris. And she chose to stay.

Diseris didn’t want to leave Frisell behind. Therefore, she was the perhaps the closest survivor to the bomb and she could have credible information. Diseris didn’t when the bag was left because she didn’t see it and so Sebastian asked her about the shrapnel she had taken in. It could him give some idea on what kind of bomb it was. Sebastian asked if he could collect the largest piece and she turned him down. It was lodged into her spine and her doctor didn’t want to take it out in case it killed her. She was told to leave the shrapnel alone and she wasn’t going to go through even more surgery just for Sebastian’s peace of mind. He had tried to push her and tell her it was her duty to help. And Gregorio had to tell him to stand down.

Gregorio said that Diseris had to make the choice on what was best for her. It wasn’t their place to push her or risk her life to make things easier on there. There were other options and Patton found one. He found footage of the event and it showed a man named Alan Van Syoc go into the building with the bomb. The man was in real estate and didn’t have a criminal record, but he did have a brother named Carl facing life in prison and one of the key witnesses in the case had been Dr. Alice Logan. Logan was the one that spotted the bomb first and that’s because it was left at her station. Meaning that this whole thing could have been hit. Alan wanted to kill the one person standing in the way of his brother’s freedom.

Carl Van Syoc was accused of murdering his business partner. He claimed that they were in the car when they got carjacked and the police proved that his story was faked, but Alan didn’t see it that way. He said that his brother was innocent and he denied planting a bomb. He also quickly lawyered up and so the team tried to get him another way. They tested what little of the bag that remains and they found Alan’s DNA. It proved conclusively that he had contact with the bomb and so the team thought it was all over. They arrested Alan and Sebastian carried over the boxes of evidence that they had at their office over to the NOPD evidence locker. And his friend behind the desk was putting it away when another bomb went off.

The second bomb was planted in one of the evidence boxes. It was Sebastian that brought it and he blames himself for the fallout. They had lost all the evidence they had on Alan Van Syoc and the brothers were now responsible for another death. Sebastian counted Lana as a friend. They hug out and would make jokes, but she was dead and Sebastian wanted to get justice for his friend. Sebastian tried to recreate the evidence they had against Alan and without DNA there was just the video. Sebastian worked with Patton to hack everyone that was there that day and together they all the videos these people took to get second footage of Alan with the bomb. It would be inadmissible in court and so the only thing it was good for was showing Alan with a conspirator.

Alan used the second bombing to force the feds into releasing him, but the team must have had a partner and so their illegal footage named the second man. He was a former ATF Agent by the name of Colton Wolf. Wolf was a bomb expert when an investigation into his conduct showed he was taking shortcuts and so a lot of people were able to use his conduct as part of their defense. The lawsuits caused the ATF to drop it and he blamed it all on Dr. Alice Logan. She led the investigation into him and she inadvertently created a common cause between Wolf and Carl Van Syoc. The men met when Van Syoc hired Wolfe to be his counter-witness to Logan and the men must have come up with the plan in prison.

Everything the team has against Wolfe was based on the illegal footage and so Sebastian went back to Diseris. Her whole world was turned upside down and Sebastian hadn’t empathized with her before, but he does now. He also knows that Diseris stayed with her friend even when she didn’t have to and that showed she was a fighter. She didn’t leave because she hadn’t wanted to give up and so Sebastian asked her to be strong now. He was able to convince her to go through with the surgery and they collected the shrapnel. Sebastian couldn’t take part in what happened next because he wasn’t well from surviving his own bomb and so it was the team that got the information. They connected the shrapnel to Alan and Wolfe.

They thought if they approached Alan that he would reveal what really happened. He was a good man before he got involved with his brother’s scheme and so their understanding got him to open up. Alan said that it wasn’t supposed to be a bomb. He thought it was a fish wrapped in Logan’s deposition at his brother’s trial and he couldn’t live with the fact that he played a part in her death. He was willing to testify against Wolfe and right after he said it – Wolfe short him. The bomber has been following Alan since the beginning and he tried to take him out when he proved a problem. Only it failed. Alan survived while Wolfe did not. He killed himself when he was surrounded by NCIS and now Alan could testify against his brother.

And it seems Sebastian is coming into his own.