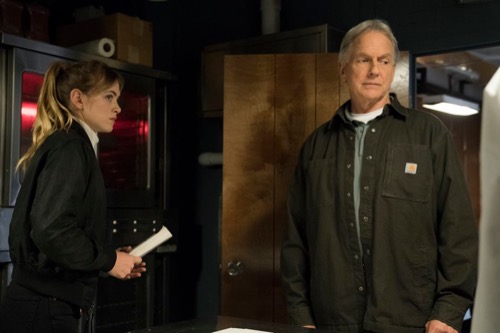 A sailor died in the North Atlantic Sea. US Navy SEAL Petty Officer Robert White was participating in a routine dive when the men and his women on his team noticed that he wasn’t moving. They dragged White’s body back onto the submarine and tried to revive him, but it was already too late. White pronounced dead and his death warranted an investigation. NCIS was asked to work this case at the last minute and it cut into their time with Ducky. Ducky was retiring. Everyone had wanted to be there for the doctor’s last day and they hated how a case came in the way of that. Palmer needed to remove the body from the ship and carry it back to the lab. And both Gibbs and Bishop had to stay behind to carry out interviews.

There was a slight drawback to Bishop to staying on the ship. She has this fear about drowning and so she had tried to get the interviews over with as fast as possible. Only the ship began submerging while they were still onboard. Both Bishop and Gibbs knew that the ship wasn’t allowed to do that as they were investigating a murder and that made them question the decision of the USS Memphis’s captain. The COO was risking their lives and they demanded an explanation. They asked the captain what was happening, and he said something vague about receiving direct orders. The submarine had an order that demanded they dive and that meant they weren’t going up to the surface anytime soon.

The captain thought that would be that with the agents and it wasn’t. They still had people to interview and they demanded that they continue to do their jobs, but the captain said that his people shouldn’t be kept from their jobs. He said as long as they didn’t get in anyone’s way that they could do as they wanted and if they interfered then he threatened to shoot them out of a cannon. The captain was solely focused on his orders and there was no reasoning with him. The NICS agents did their best to stay out of his way and they went ahead with interviewing everyone that went on that dive. They spoke to two divers and both said that they didn’t see or hear anything suspicious. They also thought White’s death was accidental until Gibbs received a message from Kasie.

Kasie managed to send the message before the dive and so that’s how they agents learned that White was murdered. Someone tampered with his overpressure valve on his oxygen tank. It couldn’t have been accidental either because wire deliberately cut and so both Gibbs and Bishop were trapped on a sub with a murderer. They asked one of the divers about that because they had a file detailing how White and he had bad blood, but it was anything serious. The two men fought about who was the best Spiderman and they were both wrongs because the best Spiderman is clearly Tom Holland. At least according to Bishop and so she was willing to stop looking at White’s fellow diver as a suspect.

Gibbs tried informing the captain about their recent findings, but he had been quick to dismiss what he said because he claimed he had to focus on their orders and so that’s when NCIS had enough. They asked the second-in-charge what these orders were and they were told that the submarine was asked to prepare itself for war. Neither Gibbs nor Bishop knew who they were at war with and they were concerned. They thought it was a little too convenient how the sub was preparing for war right after White’s murder and so they questioned if the two events were connected. They received a tip about there being something that White had wanted to show his peers and so they searched White’s room until they found it.

They found a book on the ship’s electrical engineering. There wasn’t a reason for someone like White to have this book and so they traced it back to the kitchen staff. They talked to the cook who said he received orders from the COB Shaw. The COB then claimed that she asked White to get the book because she couldn’t be seen having it. She had some questions because she saw the man that handles the weapons behind an electrical panel one day and wanted to know what he was doing, but she didn’t want to make the connection between that event and White’s murder. She said she didn’t say anything because she knew her crew and the man they were questioning had been her friend for fifteen years.

Weapons Officer Justin Hardy was important to the COB Shaw and so she had two federal agents locked up, but then they got out of their prison and made their ways to the bridge. They believe that Hardy was involved in something nefarious and that he had to kill White to cover what he was really doing. The only thing that could make sense to the two seasoned agents was what if the war hadn’t been declared. Orders like that would take some time to pass to the submarine and so it was odd that everything was happening so quickly. The agents accused Hardy of faking the orders and declared that he murdered White. They didn’t have any evidence to corroborate their take on the situation and so they got pretty lucky with their team up on the surface.

The team was warned that a nuclear submarine had disappeared off the map and that they weren’t taking orders, but they were able to trace this mystery back to Walter Miller. Miller was an engineer that became a hermit seemingly overnight and it happened once he started going on and on about the war should be taken to Russia. This guy was sending false messages to the submarine and stalling the real ones from ever reaching the ship. So it was a good thing when Torres and McGee found him. They were able to send in real orders and got the submarine to stand down. They even threw in the part how they weren’t really at war so that told the captain that the agents had a point. He couldn’t trust his Weapons Officer.

The captain also asked that the agents kindly escort Hardy off the ship and as he was being carted away the man began sprouting about how there was a war coming one day whether anyone was willing to admit. It seems he went into a depression when he lost his whole family in a car accident and being in a vulnerable position made him susceptible to a man like Miller.