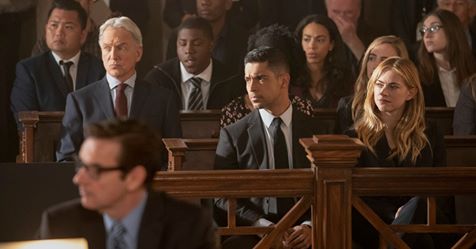 Tonight on CBS NCIS returns with an all-new Tuesday, April 30, 2019, season 16 episode 22 called, “Judge, Jury…,” and we have your weekly NCIS recap below. On tonight’s NCIS season 16 episode 22, “Judge, Jury…,” as per the CBS synopsis, “Kasie solves a 30-year-old murder case, but a loophole in the legal system may set the suspect free; McGee visits an elite technology company that is offering him a highly paid position.”

McGee was headhunted by Silicone Valley. He wasn’t sure if he wanted to take the job and so he decided to go out there on a visit, but everyone at the office thought he was spending time with his family. Its why they didn’t question his sudden day off. They figured he needed as much time with his family as possible and so no one pushed him to help out with trial. The team was asked to give testimony because the federal initiative that Kasie spearheaded had led to an arrest. She wanted all DNA even if it was from cold cases to be tested through modern systems and a hair follicle found in the 1989 Ice Cream Murder case revealed their culprit was Stuart Crum. Crum poisoned and sold a bunch of ice cream bars. And it caused several children to be sick as well as killed, one child.

Tommy Larson was a teenager. He was at the cross between wanting to be an adult and still very much a child. Tommy also borrowed money from his father to buy an ice cream bar, but his father found him later on struggling to breathe and was unable to save his son. His father was in court now and he wanted justice for Tommy. The team wanted justice for each child that was hurt and they have plenty of evidence. The hair follicle was in a great condition when it was found and it connected to Crum because he was once a suspect in an armed robbery two years ago. Crum was then brought in and interrogated. He admitted that his wife left him for a naval sailor and that he wanted someone to blame. Its why he used his job as a driver of an ice cream truck to hurt others.

Crum didn’t know a child would die. He confessed to just wanting to make a bunch of them be sick and from time of his confession to now he still didn’t show any remorse. It was believed he was a sociopath who didn’t need to kill more than one kid because one was enough for him. Crum’s profile said that he has a god complex and poisoning children hade satisfied this need, but Crum now wants to walk away from his guilty plea and he has his lawyer on the attack. Attorney Madson tried to come after Bishop’s testimony and he only changed his mind about going after Kasie because he found something else to toss the case. There was, unfortunately, a clerical error when Crum’s DNA was left in the system. He gave a sample for the robbery and charges it should have been destroyed when he was cleared of all charges.

It was the law in Maryland. Crum’s DNA shouldn’t have been included in the system and if it hadn’t been then there was no way that NCIS would have found him. With this information in his back-pocket, Madson declared that NCIS has nothing and that a mistrial should be declared. The judge was forced to go agree with him even if he didn’t like it and so Crum was allowed to go. He was a free man and that angered Tommy’s father. Former Navy Petty Officer First Class Kyle Larson told Gibbs that if NCIS wouldn’t get justice for his son that he’d do it himself and Gibbs tried to warn him off from doing anything stupid but later that night Crum was killed. He was strangled before he could put up a fight and everyone at NCIS suspected Larson.

NCIS wasn’t upset when they found Crum’s body. They actually joked that now they’ve got their DNA because they didn’t know how they were going to make their case against Crum the second time, but they still had to investigate the case and therefore they had to suspect Larson. Larson had been drinking and a pill bottle was found at his home. It was unfortunate because Crum was strangled and then pills were shoved down his throat as a means of making it look like a suicide. Larson was asked about his own addiction issues and he claimed that he had turned over a new leaf. He said that he hadn’t killed Crum and that he had proof. He was talking to his daughter when Crum was murdered.

The team questioned Jennifer Larson or Jen as she likes to be called. She said that she called her father that night after ten years of not speaking. Jen had always thought her father had let everything go when Tommy died and she didn’t realize just how angry he was until she felt anger herself when Crum was released because of a mistrial. It had been an injustice to be her brother and she now sympathizes with her dad. Larson told her that if she kept calling that he would give up drinking and so she didn’t think her father went from that phone call to killing someone. It didn’t seem plausible. The team thought so as well and they went digging through Crum’s life to see if they could find other suspects.

Kasie later found that Crum has a Splendifida account. She needed to ask the company to let her see what was in Crum’s Cloud, but the company wasn’t going to accept any request at the moment. Splendfida was the company that McGee claimed he was viewing and in fact, he was spying on them. The company was tied to the money that the SecDEF had in a secret account. McGee broke in and found out that the money had been moved and that three million was recently withdrawn. He didn’t know why that was and he got caught looking. He was in trouble when his team came to his defense and got a judge to sign off on a warrant that they claimed included McGee’s search. McGee was freed and Kasie got access to Crum’s cloud.

She didn’t find anything worth hiding, but she did use Crum’s other Splendifida tech to find a video of someone checking out his house and it turns out to be the bailiff in his mistrial. The man said that he believed in justice and that may be, but he didn’t kill Crum because it was the right thing to do. He did it because he was paid by the secret account that again led back to the United States Secretary of Defense.

Gibbs and the Director when to go see CIA Officer Clark about what they learned, but they walked into his home to find him dead and a fellow CIA officer standing over his body.