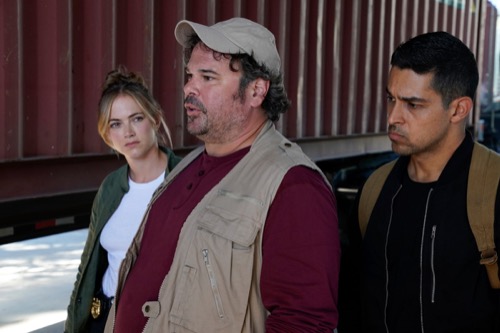 Tonight on CBS NCIS returns with an all-new Tuesday, October 1, 2019, season 17 episode 3 called, “Going Mobile,” and we have your weekly NCIS recap below. On tonight’s NCIS season 17 episode 3, “Going Mobile,” as per the CBS synopsis, “The body of a Marine lieutenant is found hidden under an 18-wheeler, and the NCIS team tracks the vehicle’s previous locations to pinpoint the crime scene and suspect. Also, Sloane encourages the team to talk about Ziva’s recent reappearance.”

Sloane was given her orders. She was told by the Director that he wanted her to analyze the situation with the team and see if they were off since Ziva’s reappearance. Ziva coming back the way she did had brought a lot of things up. The team hasn’t been the same and Sloane noticed that morale was down. She wanted to talk to the agents all the individually to help, but they used their latest case to make their escape and none of them were in any rush to come back. Not once they learned they were investigating a ‘gnome murder’.

The victim had been killed by a garden gnome. The gnome’s bloodied and pointy hat was found with the body. The body, however, was found under an eighteen-wheeler. The driver didn’t know it was there and it wasn’t until he was going through a routine check with the naval yard that the body was found. It was apparently there for a good three to two days based off of decomp. The driver should have smelled it and him not doing so was quite astonishing. Then again, he says he hasn’t gone back there in a while.

Based on how shabby the truck was looking, it was clear he hadn’t cleaned it as well. The team soon moved on from the driver and they focused on the garden gnome. The garden gnome must belong to a garden, right? The team needed to go look for one and first they identify the body. The victim’s name was Elijah Buck. He co-owns a trailer park with his brother Peter and they recently made enemies when they hiked up the rent. It was like the citizens there turned into an angry mob overnight.

They hated the brothers. They hated Eli more because they knew he was responsible for raising their rent and so the brothers didn’t stay at the trailer park. They didn’t want to be around people that hated them. Peter just didn’t know how much they hated them until his brother died. Eli had been killed on one of their lots and thankfully it wasn’t by the guy that owns the gnome. The team knew this because the guy literally reported the missing gnome to them. Which he wouldn’t have done if he killed Eli.

The team would end up questioning everyone at the park. None of them seemed to have hated Eli enough to kill him and so that made the team look at Peter. Peter hated owning the trailer park. He only got into it because his brother promised him it would be quick cash and it wasn’t. The team questioned Peter because they wanted to know if he could sell the property now that his brother is dead. Only Peter brought in a note left on his windshield that said: “You’re Next”. Peter believes someone was threatening him and he wanted to know what NCIS was going to do about it.

The only thing they could do about it was questioned who suspected. Peter told them that the tenants all had a meeting with Esther Daniel’s. She was a little old lady and she was painting a bunch of pictures in the hope of raising money. Esther and the other tenants wanted to buy back the park. They were hoping to make a feasible offer and it helped that their only roadblock was now dead. Gibbs had had a chat with Esther about Eli. She admitted it that was slightly coldblooded, but she used to like retirement and now she was just holding onto the fact she might leave a little something for the grandkids.

Gibbs had tested Esther’s drawing pencil. It wasn’t a match for the note left for Peter and later that night someone had thrown a Molotov cocktail under Peter’s car. He was very lucky it wasn’t something wore. He survived the smoke bomb just fine and the team kept looking for whoever attacked the brothers. They thought they found their perp when they realized one of the tenants was a former criminal. Vince was in the witness protection program and he was doing fine at the trailer park until the brothers came and messed everything up.

The team even brought Vince for questioning. He said that he left that life behind and that he didn’t want to draw attention to himself because his former allies might find him. Vince also had a bad asthma attack in custody. He said that his asthma has been bad for a while now and that it started getting worse when his tomato crop began dying. What he said had given the team an idea. They tested the soil where the crop was found and they found it contaminated. The soil was so toxic that it could potentially kill everyone at the park.

So, the team did some digging. They traced the contamination back to a nearby chemical company called Zullow and people from Zullow were willing to talk as long as it got them off the hook for murder. The company said that they financed the brothers. They did so because it was the brothers’ job to push those people off the contaminated land before anyone else found out. And it wasn’t the brothers doing this together, it actually was just Peter. Peter wanted the get a quick rich scheme and him accidentally his brother when Eli developed a conscience.

Peter later confessed to the whole thing. He was going to be put away for his brother’s death and the company was forced to settle with the tenants. Meaning good people like Vince and Esther were going to be taken of.

And at the end of all of this, Sloane tried to talk to the agents and they instead flipped around because they wanted to know about this “thing” she has with Gibbs.