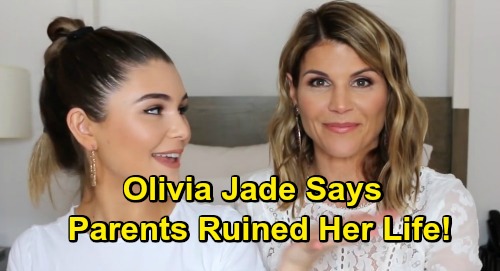 Olivia Jade Giannulli never wanted to go to college in the first place and now she’s blaming her parents, Lori Loughlin and Mossimo Giannulli, for not only pushing her to pursue an education, but for also getting caught in one of the biggest college admissions scandals the nation has seen. In fact, there’s a new report that suggests the 19-year-old YouTube personality and now college dropout is supposedly angry at her parents for ruining her life.

Earlier this month it was revealed that Loughlin and Giannulli, along with about 50 high profiled and well-connected parents, were indicted on charged connected to the admissions scandal. Olivia Jade’s parents reportedly paid up to $500,000 to help a clinch a spot for both her and her sister Isabelle into the University of Southern California.

According to ET Online, Olivia Jade and her sister are both having a tough time, as they believe they are suffering from the fallout of their parents’ decision. The celebrity couple also came up with a plan to designate their daughters as recruits for the university’s crew team, even though they were not athletes.

One insider close to the situation told the site, “She has been passionate about her career and wanted to work and was doing well but that wasn’t enough. Her parents said she would have to juggle college and her career. Now she’s devastated because everything she built implode before her eyes. She feels they ruined everything.”

What’s more, friends say that both Isabella and Olivia are counting more on their friends than their parents these days. They have been looking to their “tightknit group of friends” for support as they’ve been attacked by critics at every turn. Things have been so bad for them that both Olivia and Isabella have decided to drop out of the University of Southern California in fear of all of the vicious bullying that they would endure there.

After the scandal broke out, Sephora decided to cut ties with Olivia Jade while Lori Loughlin was let go by both the Hallmark Channel and Netflix’s Fuller House. The actress is due in a Boston courtroom on March 29th.