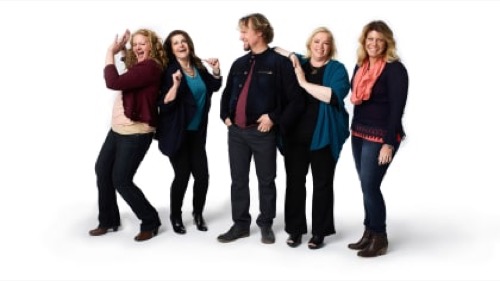 Kady and Christine go to check out Flagship, AZ.  Mariah has something big to announce to the family.  Meanwhile, Janelle talks to her kids about to the move.”

It hasn’t been a fun couple of weeks since Kody brought up moving. The sister wives all agreed that they had to move that it should before their latest batch of triplets enter their junior year and so they needed to find a place fast. They couldn’t go back to Utah and Las Vegas wasn’t anywhere they wanted to stay. Therefore, someone brought up Arizona. Not the desert part of Arizona because the family as a whole was sick of seeing it and so they went to Kody because they wanted him to know that if they had to move then it should be to somewhere pretty. They wanted another cul-de-sac and they wanted it with grass as well as flowers. The sister wives were concerned about moving to a home that felt like home and Kody’s concerns laid elsewhere.

Kody wanted to sell the houses they had now before the market fell out and he wanted to move somewhere cheaper. He wasn’t thinking about the aesthetics and he didn’t know why his wives were until he thought about it. Kody realized that they were stalling him. They didn’t want to move before and still didn’t want to move. They just gave Kody a high list of demands because they were trying to tie his hands until it was too late to move the kids. All of their children would need at least two years in another school for them in order to be considered for scholarships and so if they stalled Kody long enough that will force him to give up on moving. And so Kody said that nothing was going to sway him.

Kody said they were moving and as the leader of their family he believed he said they were going to go no matter what. He just wanted their opinion because he knows that if they don’t add their input that they’ll come to resent the move and so he turned to Meri as an ally. Meri told him like it is and she said that no one actually wanted to be the person that said they were against the move, but the ones with the kids didn’t want to go through the hassle of moving and if two of the sister wives agree then it’s like its fact. It was a saying in their family thanks to Christine and it held true. The sister wives could easily band together on any decision in the family and Mei told Kody that if the others were truly set against it that she’ll stand with them.

Meri wasn’t in the same boat as the rest of them. She didn’t have kids in school and her only child Mariah was officially an adult, so Meri could be impartial. She could see where Kody was coming from about wanting to move to protect their finances and she could see why her sisters weren’t ready to move. Meri ultimately had to decide between these two groups in her family and she chose to side with her fellow sister wives. Their relationships with Meri hadn’t been easy and Meri has been trying to change that. She’s been talking to them more and she’s been trying to repair her relationship with them because she knows that there are trust issues that stand in the way. And that it wasn’t all from the catfish thing.

For example, Meri and Christine used to be really close. They would always do crazy and silly things together. It even used to be a problem with Kody and to the sister, wives had a great relationship. It didn’t change until Christine became depressed after her last child. She began withdrawing from everything and also went through some problems with Kody. It had been horrible for her and she had turned to Meri for help. Meri had told her at the time that she needed to work on herself because she was the only thing she could change and so Meri ended up taking advice. She realized she was looking on her family without seemingly being apart of it and she began working on herself just to fix the problems.

Meri was now in a better place with Christine because they were honest with each other. She was also trying to do the same her other sister’s wives and that’s why she took their side, but the one relationship that was the most crucial was the one she had with Kody. Kody was her husband and unless their relationship fixed itself then it was hard for Meri to consider herself his wife much less be anyone else’s sister wife. She tried to work on what she had with Kody and it never gets anywhere. He couldn’t even let her feel reassured when she opened her business in Utah because he said it was good that he pushed her away and Meri was like’ what does even mean?’. She doesn’t know if Kody wants to be in her life and so she didn’t know if he needed her or wanted her to go.

Kody coming to her to get everyone’s thoughts on moving was probably the first time he willingly reached out. He even stayed around after Meri made it known which side she stood on and so the two of them talked. They talked about Mariah. Mariah was taking a break before grad school and she was moving back in with her mother for the summer. Mariah was also a package deal. She was coming with Audrey and so Kody had wanted to talk about it. He wanted to make sure that Mariah wasn’t going to be cohabitating with her girlfriend at Meri’s house and he considered asking Audrey to move into another house. And Meri said they didn’t need to go through all of that because she would make sure that the girls sleep in different rooms.

The Brown family have very conservative values and they didn’t believe in cohabitation without marriage or at best an engagement. Mariah and Audrey do seem like they were going to get engaged soon, but they weren’t there yet and living with Meri was temporary. They were going to move to Chicago together once Audrey finished school and so they’ll be on their own then. They wouldn’t be breaking anyone’s rules for the house and Kody wouldn’t have to worry about the morality of his children. Kody went on to double-check with Meri to make sure they were on the right page about it and she said she still thought the same about the couple being engaged before they shared a room at a parent’s home.

Afterward, Kody left and Meri went about her day so the only thing that changed because of their conversation had been Kody’s strategy. He realized he needed to change his strategy to get his family on board with the move and so he took each of them out on trips to Flagstaff, Arizona. Kody considered the place because it was in a state that shared their values and it also considered Flagstaff because of the cost of living. He didn’t want to move them to someplace even more expensive and so he searched everywhere until he found Flagstaff. It matched all of Kody’s demands and he could show his wives some model homes. And so the next thing he did was take them all on a trip with just him to get them interested in Flagstaff.

Kody took Robyn out there first. She got her to see how beautiful it was and she came to love the land even if she was still dreading the move itself. Kody then took Christine out there. She fell in love with the model house and she didn’t particularly care for the area. It was pretty windy out there and she was sick of having to deal with the wind in Las Vegas. She even knew what type of model house she wanted to build and the one downside had been the wind. Nevertheless, both women came back to home with different ideas about moving and it helped that they no longer wanted to stay in Las Vegas. It might be horrible to say but the family no longer felt safe in Las Vegas since the shooting and so they wanted to move to a place where they could breathe a little easier.

There were still a few holdouts because Janelle’s son Gabe threatened to run away if they tried to move him. He asked his sister if he could move in with her and when she turned him down he threatened to go move into a hostile. He really didn’t want to move or leave his friends and family and so that made Janelle not want to move. She didn’t want to force her child and she didn’t want to hear about how everyone was enjoying Flagstaff. Janelle was leaving the final decision to everyone else because she didn’t want to be the bad guy and so the next person that Kody will be taking to Arizona will be Meri. And there was some pressure on her to fall in love with the neighborhood that both Robyn and Christine loved.