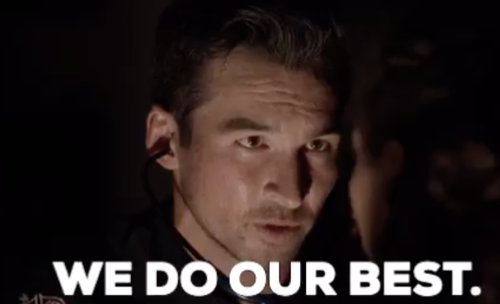 Tonight on ABC Station 19 returns with an all new Thursday, April 18, 2019, season 2 episode 14 called, “Friendly Fire” and we have your Station 19 recap below.  On tonight’s Station 19 recap as per the ABC synopsis, “When Station 19 gets called to a structure fire at a coffee processing plant, the team risks their lives to save Station 42’s captain. Meanwhile, Ripley and Vic consider a shocking option to save their relationship; Andy gets some surprising news about some of her fellow crew members, and Pruitt takes on a new position.”

Tonight’s Station 19 season 2 episode 14 looks like it is going to be great and you won’t want to miss it.   While you’re waiting for our recap make sure to check out all our TV recaps, news, spoilers & more, right here!

Fire Chief Ripley and Vic wanted to be open about their relationship. There were just a few dozen regulations and unwritten rules that were stopping them. They either risk getting fired or demoted if they came out and said screw the consequences, but they weren’t saying that because the consequences do matter and so they tried to find a loophole. They even through everything and the only feasible one they found was marriage. Marriage was the only thing that would protect their jobs because of this rule that said rank doesn’t count between spouses. Ripley and Vic talked about this and they weren’t sure they were ready for such a huge undertaking. They were still in their dating phase and weren’t serious enough to move in together much less talk marriage.

The couple was going to have to find another solution to their problems. Until then, neither wanted to discuss marriage anymore and so they brought it up with others. Vic went to Montgomery and Ripley went look looking for Sullivan when he couldn’t find him. Sullivan didn’t know what was going on and so he went about his day with Andy. The two of them were friends now and that meant being there for each other. Andy was his workout partner because he couldn’t find anyone else and she convinced him to go with her on hydrant inspections. It was technically below his rank to do it and he went anyways because Andy asked. They were driving around when they spotted a fire and called it in.

The two of them then geared up to go into the building and that’s how they found two women that were still inside. One of the women had passed out and the other didn’t want to leave her, but the firefighters helped them to get back on their feet and so they got out of the building. The firefighters would have gone back in except they were no longer needed. Station 42 had answered the call and they didn’t want another station getting in their way. Captain Ted Conlin from the 42 assured the duo that his people got this and he waved them off. So both Sullivan and Andy arrived unexpectedly back at their firehouse. Andy was going to put away some of her equipment and she opened the door to find her best friend in there with her ex-boyfriend.

Andy, of course, demanded to know how long this has been going on, but she had been thrown when they said weeks rather than this be a one-off and so she didn’t want to talk to them. She went to Sullivan’s office to vent and as she was letting out some of her frustration they heard a call in from the fire they left. It seems the fire had been more than Station 42 could handle on their own and because it was a shipping factory there was coffee piled up all throughout the building. Making it perfect kindling. Station 19 arrived in time that everyone thought the worst had been averted and unfortunately a flashfire took out the coffee before they could hose down the building. And so Station 19 had to go to rescue the members of Station 42 that were trapped.

It was like a maze in there and soon Station 19 was asked to pull out. Captain Conlin said the building was no longer structurally safe and that was too dangerous. He was the riding captain on this and so he pulled out everyone, but Ripley was also there and he outranked Conlin. He said that he could go in and find him. So he asked Sullivan to be his eyes. Sullivan guided him through the building and Ripley got to Conlin. He also got him out in one piece. Sullivan had been happy to see them both and he invited them to drinks when Conlin was up for it. And so Sullivan was getting better at making friends. He also gave Ripley time to be with Vic because Vic was the only one that was excused from the double shift.

Vic has been talking to Montgomery and their conversation as well as seeing Ripley go into the building made her realize that she didn’t want just a paper marriage. She wanted the real thing. Vic told Ripley what she wanted and she basically proposed to him. He was supposed to meet her at their dinner and Ripley was running late because he wanted to pick up flowers for her. And when he didn’t show at all, she thought it meant he didn’t want to get married and so she returned to work.

Only Ripley did plan on going to see her. He just collapsed on the sidewalk before he could and was rushed to the hospital.

Andy also told Bishop she was upset because her friends didn’t think to tell her what was happening and so their friendship has hit a wall where one of them has to be angry until she either gets over it or ends the friendship.