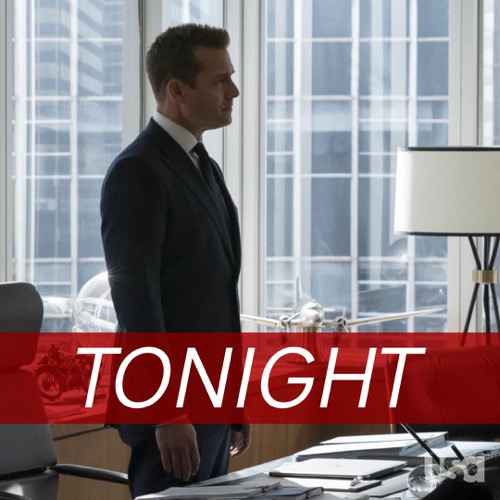 Tonight on the USA Network their critically acclaimed drama, Suits returns with an all-new Wednesday, September 18, 2019, episode and we have your Suits recap below. On tonight’s Suits season, 9 episode 9, “Thunder Away”, as per the USA Network synopsis, “Mike helps Harvey move on from a personal loss. Things get complicated when attempts to take down Faye are made.”

Harvey is standing at his mother’s funeral giving the eulogy. Mike is in the crowd of family and friends. At the gathering after, Donna tells Mike that Harvey is having a hard time with his mother’s death and Faye, who just won’t back down. Meanwhile, Harvey and his brother Marcus talk. Marcus gives a folder he found on their mother’s desk to Harvey. The gang talk in another room about how they have never seen Harvey like this. Sam and Mike talk. They plan to team up to get rid of Faye.

The next morning, Mike arrives to get Harvey up and moving. They are taking down Faye. At the office, Mike serves Faye paperwork for wrongfully firing Sam. Faye heads to Louis and Harvey. If they can represent her and win then she will go. Faye demands they do not tell Sam and Mike. If they say anything they will never get rid of her. They tell Donna who runs to Alex for help. Harvey is in no state.

In the judge’s chambers, Sam and Mike are surprised to see Harvey and Louis. Sam tells them she isn’t going to back down.

Later, Donna cannot believe Faye would do this. Mike tells Sam there has to be something going on if Harvey and Louis are helping Faye. They decide to counter. Faye gets it and gets angry.

Mike runs to Katerina to ask why she thinks Louis and Harvey are helping her.

At the firm meeting, Harvey attacks Faye for being bitter and hating everyone at the firm. She storms out.

Sam visits Robert to ask if he will appear in her corner at court tomorrow.

Harvey reads the envelope Marcus gave him. There is a note in there from his mother.

In court, Louis attacks Sam on the stand, making comments about her upbringing and more. He sinks so low Katerina asks him why after court. Sam and beside herself, yelling at Mike for not objecting. Mike tells her tomorrow is their turn.

The next day, Mike questions Faye on the stand. They prove through other’s actions that Faye once fired someone else without reason and was sued as well as the fact that the entire firm doesn’t like her. Faye is angry and tells Harvey and Louis they need to find out who leaked details of the prior lawsuit to the other side. Harvey and Louis are also trying to find out who leaked the information. Katerina admits she did. Harvey blows up.

Donna visits Mike to ask him to have a drink with Harvey. He needs it. Meanwhile, Katerina tells Faye she supplied the information. Faye fires her.

Harvey and Mike get a drink. Harvey serves him a subpoena at the end of the night. Mike begs to know why he is helping Faye. Harvey just can’t tell him.