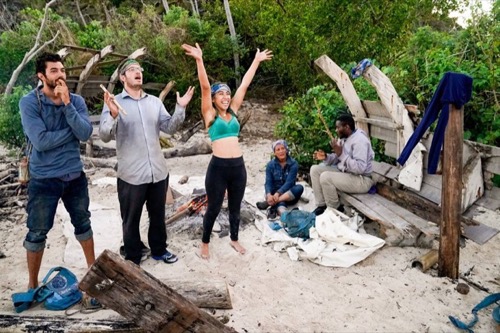 Tonight on CBS Survivor: Edge of Extinction airs with an all-new Wednesday, March 27, 2019, Season 38 Episode 7 and we have your Survivor recap below. On tonight’s Survivor season, 38 episode 7 called “There’s Always a Twist,” as per the CBS synopsis, “Alliances are tested after a highly anticipated merge between tribes. Also, one castaway can rest easy after winning the first individual immunity challenge of the season.”

Its time for the tribes to drop their buffs, they are merged. Jeff welcomes back the tribe members who went to Edge of Extinction. One of these six is about to earn their way back in the game. For the Edge of Extinction challenge, they are going to race through a series of obstacles, getting to the finish where they must maneuver a ball to the top of a very long trap. First to finish earns their way back int he game. Chris earned an advantage, to practice with bamboo and string. Keith also got an advantage, to disadvantage another person by giving them thirty knots in the final stage of this challenge, he chooses to give it to Chris. This is the moment these voted out tribe mates have been waiting for.

Chris has the lead, but it doesn’t take long for Aubry to pass him, she looks like she is out for blood. Chris has to untie those thirty knots, he is focusing and staying positive. Everybody is the final stage, Wendy is the one to beat, she is very close to the top. Wendy drops right at the top, she has to start again; this gives Chris the chance to catch up, but he drops as well. Rick has won, he has earned his way back in the game. Jeff announces that Extinction begins again. Every person voted out will have the same opportunity. The tribe heads to the Manu beach for the feast and must come up with a new tribe name. Meanwhile, Rick claims he is an all-new man since Edge of Extinction. The tribe leaves and Jeff asked the remainder of the Edge of Extinction people, who wants to go back there, for another shot in this game. Everyone chooses to go back.

The tribe returns to Manu for a huge feast. Rick tells everyone that Edge of Extinction was purgatory. Kelley doesn’t want Rick back and wishes he didn’t make it back. Rick knows he needs to make a human connection, so the tribe doesn’t think he is an easy vote out because he just came back. Julie really likes Rick, she is rooting for him and wouldn’t want to see him go back to Edge of Extinction so quickly.

Chris knew that going back was going to be hard, but it is what he needed. Wendy is so proud of herself and happy to be in the game. Aubry knows the Edge of Extinction is heating up and the weak are not going to survive. When everyone is crumbling around her, she knows exactly what she is going to do.

At Vata, Kelly and Lauren are strategizing and thinking maybe Rick is the best target since he just got back. Kelley goes to speak to Joe, she feels like she is at his mercy. Joe says he doesn’t trust most of his former Kama tribe. Kelley thinks Joe will be on her side. Julie is shocked when Kelley and Lauren tell the girls that they are wanting to target Rick. From a moral standpoint, she thinks it is wrong and maybe one of them should be sent off.

When Rick returned to camp there was something in his bag, he sneaks off to see what it is – an immunity idol. But, the idol is split in two, he has to give the other half to another player and if after tribal council, the two are still there, the idol will then have its full power.

Rick goes to David and tells him about the immunity idol, he feels like he can trust him the most.

Day 19, time for the first individual immunity challenge. For today’s challenge, they are going to stand on a narrow beam, while balancing a statue. At regular intervals, they will move farther down the beam making it more difficult. The last person left standing will win and be safe from Tribal Council.

This challenge is on and immediately there is a huge gust of wind. Ron is the first one out. Gavin drops, we are down to eleven. Time to move farther down the beam. Wardog is out. Rick is out. Another gust of wind and Victoria is out. Aurora is out. Time to transition again. Kelley says her arms are numb and a bug is on her leg, she drops. Time for another transition, Eric and Julia are out then David. It is down to three. They have been up there forty minutes. Joe drops out of nowhere. Julie and Lauren are the last two and there is more wine. The winner is Julie.

Julie is thrilled that she won, no blindside on her tonight and she is gunning for Kelley because she is a huge threat. Julie tells Rick that everyone wants to get rid of him, but he has to believe that he is not going home. Rick shares this info with David.

Ron asks Joe who she votes for and he is really vague. Ron doesn’t trust him but his true alliance is with Eric, Julie, Julia, Gavin and Victoria. Ron wants to convince the Kama 6 that it should be Joe tonight to leave.

There are three options on the table; Joe, Kelly or Rick and everyone seems to be divided.

Kelley tells Jeff that is technically in the minority now and doesn’t feel safe. Ricks says the dynamics have changed since he was thrown back in. Victoria says that there was no talk to vote out Rick tonight, there are bigger targets. Joe says that he doesn’t feel safe. Ron says he doesn’t know if there are any idols out there because nobody talks about it. Rick said that Joe painted all day and didn’t look worried, it was weird. Joe says he believes in his alliance.