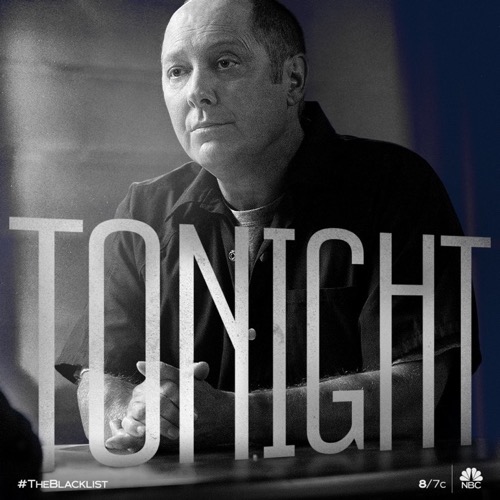 Tonight on NBC their hit drama The Blacklist starring James Spader airs with an all-new Friday, February 22, 2019, episode and we have your The Blacklist recap below. On tonight’s Blacklist Season 6 episode 8 called, “Marko Jankowics”,  as per the NBC synopsis, “Liz and Jennifer search for a woman who may know a secret about Red’s past, and find themselves in the crosshairs of a ruthless smuggler, forcing Liz to ask an unexpected source for help. Meanwhile, Red mediates between two rival gangs in prison.”

A young couple, Angela and Russell Chambers, from Canada, are going through security at the airport, an American officer takes them at a different window, so pregnant Angela doesn’t have to wait in line. Once in the US, the women head to a doctor who performs a c-section, but it is not a baby, it is a bag of drugs that she had surgically planted into her stomach.

Red is in his cell, he calls Dembe who tells him that he found a lead in London, Red tells him to go get him Meanwhile, there is another fight in prison.

Liz is with Jennifer, she found Margarite Bernard, a nurse who you used to work for Dr. Koehler, walking her dog in an upscale neighborhood, that no nurse could possibly afford. She used to help criminals get new identities. She was in the room when Red changed his face, they need to get her to talk. Liz wants to get her to talk, but Jennifer doesn’t want to do it, she doesn’t want to be involved with kidnapping the nurse. Liz tells her that the nurse has their answers, it’s the only way to find out the truth about Red. Jennifer says ok. Liz says that she will handle it, all Jennifer has to do is drive.

The Warden goes in to see Red and tells him that he has been quite accommodating and hopes that he will be accommodating to him. He tells Red that he has a situation brewing between rival gangs, one is a motorcycle group, runs drugs through New York and Baltimore, call themselves the cyclops. One of their members< Oscar, did some gambling with a soldier with some southern inmates called the Rock River Crew. The soldier doesn’t want to pay his debt and more people are going to die. Red says he would love to help but he is preparing for trial. He asks Red to call for peace because the groups respect him. Red says they respect him because he minds his own business. He tells Red if he is not going to give, then he is not going to get.

Jennifer and Liz are parked and waiting to see the nurse. They find her and Liz gets out of the car, pulls a gun and forcibly gets her into the car. Jennifer tries to pull away and another vehicle stops her, a guy gets out with a gun and smashes the windshield. Liz and Jennifer are attacked, one man is choking Liz and she finally gets loose when she shoots him, but the nurse and Jennifer are gone.

Liz tells Ressler the truth, she and Jennifer turned Red in. They found the nurse and when they took her, they were attacked by two armed guards, one is dead, one left with Jennifer and the nurse in the van. All she wants to know is the truth and now she has lost her sister.

Liz was tracking Jennifer’s cell phone and she is able to see that she is on a plane. Ressler traces the fingerprint of the dead guard, he is Tristan Benedict, he is a known associate of Marko Jancowics who deals with LSD.

Ressler finds out that the nurse is Koehler’s girlfriend, that is why she is being guarded so closely. Ressler thinks the jet is in Montreal. He tells Liz that she should go to Red for help.

Liz goes to see Red and tells him that Jennifer has been taken. Liz lies and says that Jennifer called her out of the blue, crying and said she needed help. Red knows she is lying and asks her what she is not telling him, she says nothing.

Red calls the Warden into his cell and tells him that he thinks their interests may be aligned. Red meets with Oscar tells him to help him solve his problem and he will in return help him.

Jennifer is still in the chair, they looked at her phone, they saw information about Liz and knows she is FBI. Jennifer tells him the truth that they are trying to find info about Red because he is their father. She tells him about the nurse and how she was working for Koehler.

Dembe is in London, he is searching for an apartment, puts his gun down to take photos of a computer when someone attacks him. They get into a fight, the man runs off but hurts his leg.

Red is on the phone with Dembe, she tells him that Liz knows he was someone else and is trying to find Margarite so she can give her information. He tells him that they need to find her first. Also, he tells him about Jennifer and Dembe might be the only hope of keeping her alive.

Red meets with Liz and tells her to find Jankowich she will have to find one his couriers. There is a young woman, she is arriving today on a plane from Montreal. Ressler and Liz head to the airport, they find her, she is pregnant. They bring the woman to Ressler’s apartment, his girlfriend is there and she is not happy. Liz questions the woman, she tells her that Jankowich is holding a woman and she needs to find him. Liz wants to trade the pregnant woman for Jennifer.

Jankowich is with the nurse and Jennifer, he asks her if she worked for Kohler and she admits it. Jankowich leaves the room, she tells Jennifer, that she doesn’t know who Red was before, but she does admit that Katerina Restova took Red to Koehler.

Jankowich gets a call, it is Ressler and tells him that he has Alexandria and is willing to do a trade. Alexandria is not feeling well, she tells Liz that she is holding ten million doses of LSD and they need to cut it out,

Red meets with the head of Rock River, he tells him that the ugliness between them and the motor cycle gang has to stop.

Liz asks Ressler about Hanna, he tells her that he hired her to be his girlfriend.

They arrive at the drop-off. Liz tells Jankowich that Alexandria is dead, she ruptured. They have the 50 million though and will trade it for Jennifer. Jankovic goes to shoot Reseller and shoots first.

In prison, Oscar is killed during lunch by his own gang.

Jennifer tells Liz that Margarite said a Russian woman brought Red to the surgery, they need to get Margarite and ask her more questions.

The Warden accommodated Red because he stopped the war, even though Oscar is dead. Red says he would like a new work detail, maybe something in the kitchen, the Warden says to consider it done.

Jennifer tells Liz that she doesn’t think she can do this anymore. She apologizes to Liz, but says she is going to go be with a friend on Long Island, she needs peace in her life. Liz tells her that this will end, and when it does, she will find her.

Ressler is with Hanna, she tells him that she is sorry she got involved with him, she should never have gotten involved with a client. Hannah gives him back his key to his apartment.

Dembe is on a plane, he has Margarite with him. Dembe tells him to take care of her, now that she has mentioned Katarina.

Red is in the kitchen, doing his new job. Red finds an excuse to leave the kitchen and clean the tables, he walks by the leader of Oscar’s gang and kills him without anyone knowing.